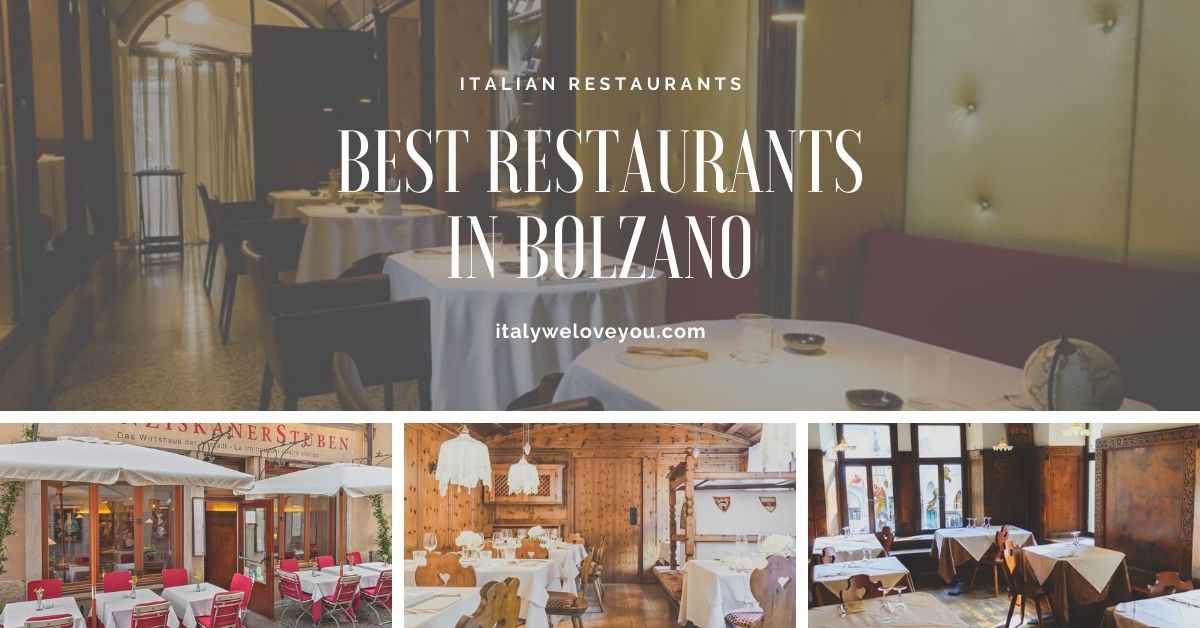 Bolzano is an autonomous province in the north of Trentino Alto Adige, in South Tyrol. The language used daily by the majority of the population is German. Obviously, this land reflects its tradition of German origin also in the cuisine. Its gastronomy is rich and tasty, with exceptional local products. Speck is one of the best products in the area, known throughout Italy and also exported abroad. You absolutely must try the “Schuttelbrot”, the rye bread typical of the cuisine of South Tyrol and the “canederli”, one of the most famous traditional dishes of the South Tyrol cuisine: these are large bread dumplings (a dish has a maximum of three gnocchi ) made with stale white bread, eggs, speck and onion. They can be served in different ways, both as a soup, as a first course or main course. The spinach “Spatzle” is a very good first course with small Tyrolean dumplings, made with flour, eggs, water and spinach is added to the mixture, then seasoned with speck and cream. The “Schlutzkrapfen” are also known as Tyrolean ravioli; they are crescent-shaped ravioli filled with spinach and ricotta. They are traditional from  Pusteria Valley but are now widespread and present throughout South Tyrol. In the main courses, the great protagonist is the meat. In particular, the smoked pork shank with sauerkraut and potatoes is a very rich and substantial dish. The “strudel” is the very famous dessert of South Tyrol, a real goodness. The filling will always have apples, raisins and cinnamon. It is a roll of thin dough rolled up on itself, with a filling rich in flavors, based on apples, raisins, toasted pine nuts, cinnamon, sugar, and rum.

The typical cuisine of South Tyrol is, therefore, a real delight and in Bolzano, there is certainly no shortage of restaurants to enjoy it to the fullest. If you happen to be in Bolzano or will visit Bolzano any time soon, you have to check out these 8 restaurants on our list, as they are the best places to eat in Bolzano:

The Vögele restaurant is located in the historic center of Bolzano, a few steps from the charming Piazza delle Erbe and Via dei Portici. The stube with wooden furnishings is a pleasant meeting point; inside is the oldest table in South Tyrol. The restaurant’s roots go back to the Middle Ages. In the historic restaurant, you can taste the seasonal products of the farmers’ market and those of local producers prepared according to traditional recipes. Traditional and proven, creative and modern, sweet or savory: the kitchen team creates diversified dishes with great passion and always with fresh and regional products. The dishes of traditional South Tyrolean gastronomy are prepared with creativity and refinement. The menu is really vast. Excellent pasta dishes and desserts. There are the delicacies of Tyrolean cuisine such as cheeses, locally cured meats, and even the “Erdäpfel Plattlen mit Vinschger Sauerkraut” or potato pancakes with sauerkraut from Val Venosta. Among the classic dishes, there is also the “Stockfischgröstl”, a dish based on stockfish, but also the traditional “canederli” or the excellent beef goulash. There are also house specialties, starring the excellent meat: beef, venison, chicken, Milanese cutlet, venison salami, and speck. There are also fish proposals: sea bream, salmon, and so on.

In the sumptuous setting of the Hotel Laurin, the restaurant offers South Tyrolean specialties, vegetarian and fair trade dishes. Seasonality, typicality, modernity seems to be the Chef’s triad with which he enhances the products of the territory and amplifies the concept of a clear, light, identifiable, and contemporary cuisine. Even if the sea is far away, the fish is well represented. Professional and kind service. The Laurin Restaurant in the summer months then moves to the hotel park, in the shade of the large centuries-old trees. Here are some of the dishes prepared by the restaurant: grilled octopus on the cream of potatoes with seaweed breadstick; Foie gras crème brûlée with almond crumble and apple donut; char cooked in beeswax with beetroot ravioli and goat cheese; beef tartar with South Tyrolean alpine butter and homemade rye bread; potato ravioli with creamed cod on artichoke cream; spaghetti alla chitarra with basil scent on tomato compote and Parmigiano Reggiano chips; South Tyrolean schlutzkrapfen stuffed with spinach and ricotta, with hazelnut butter and mountain cheese; Schüttelbrot tagliatelle with confit venison and Jerusalem artichoke; Maltagliati with broccoli roses and Mazara del Vallo prawns. Selection of cheeses with a choice of different mustards accompanied by homemade walnut bread. Among the desserts: grilled apple, eggnog, thyme; cottage cheese, honey, buckwheat.

Claudio Melis has opened a gourmet corner in the heart of Bolzano: In Viaggio – Claudio Melis Restaurant. The chosen location is an ancient building in Piazza della Mostra, Pock Palace. After ringing the bell and passing the imposing wooden door at the entrance, you enter this small space, with soft lighting and few seats, in short, the utmost tranquility to discover the journey that the chef has in store for his own guests. The room is minimal and deliberately aseptic: spotlights and stage are, in fact, strategically aimed at the gastronomic creations of the talented chef. The dishes can be ordered à la carte, but the advice is to build a real tasting menu with them, consisting of 5, 7 or 9 courses. The “In Viaggio” restaurant offers nine dishes in which, with products from all over the world, the chef creates a gustatory journey, in an enveloping sensorial experience. “In Viaggio” is in fact the culture of food, it is love for good food. Here are some of the dishes on offer. “Whitefish goes to Peru”: bitter herbs, ceviche, quinoa; artichoke, bagna caoda of almonds, baby spinach; autumn broth, carrots, truffles, chestnuts; wild boar ravioli, broccoli, plum; “Along the river”: rice, eel, wild herbs; roe deer, daykon, coffee, food truck; roasted pineapple, mandarin, coconut and thyme.

The Löwengrube Restaurant is the oldest restaurant in Bolzano, with a pleasant atmosphere in a refined setting. Trattoria since 1500, this elegant restaurant with stube is one of the best kitchens in Bolzano and also offers a 13th century cellar where you can eat by reservation. The rooms of this old restaurant meet with trendy design: at the entrance, made in a contemporary style, the wine display. Here you can taste one of the 1,000 wines from the vast assortment. In the neo-gothic stube of 1543, where you can admire the frescoes and a ceramic stove in Art Nouveau style, you can breathe the scent of history. Passing through an ancient stone staircase, you reach the upper floor, which will surprise you with an open kitchen, a large room with a square table, and a liberty-style majolica stove. The ceilings of all the rooms are beautifully frescoed. Here tradition and modernity pleasantly come together in an unforgettable gastronomic experience. The restaurant is the realm of chef Michael Meister; here are some of his dishes: artichoke salad with parmesan flakes, cherry tomatoes & lime dressing; creamy organic egg; scallops in orange blossom crust; basil ravioli stuffed with monkfish; potato gnocchi with herbs with wild boar ragout, brunoise roots & pecorino flakes; grilled swordfish.

The Batzenhäusl, a cozy restaurant near the historic center, is one of the oldest taverns in Bolzano. For centuries, Ca’ de Bezzi was, in addition to being an Osteria of the Order of the Teutonic Knights in the nineteenth century, also a meeting place for intellectuals, politicians and artists. Tradition is combined with modern architecture. The structure retains the original building on three floors, the beautiful artists’ stube and part of the famous collection of portraits begun in 1889 and survived the Second World War. It is a restaurant with typical South Tyrolean cuisine, with “canederli”, cheeses, cold cuts and polenta. Do not miss the “artist’s pan”, a mix of pork shank, chicken, pork ribs, bacon dumplings, sauerkraut, potatoes. Potato ravioli stuffed with gorgonzola and goulash are also good. Finally, as a dessert, the “dessert tower”. The handcrafted beer is excellent. The Batzenhäusl has become the first craft brewery in South Tyrol. Two master brewers trained in Munich work here, producing 5 thousand hectoliters of beer a year, divided into about 20 different types, 15 of which are always available in bottles or on tap. If you are not sure which beer to order, the staff can suggest the best novelties and combinations.

The Casa al Torchio restaurant is located in the historic center of Bolzano and looks like a traditional restaurant, which oﬀers tasty dishes of the typical cuisine of South Tyrol, but also a rich choice of Italian specialties and pizzas, which by now distinguishes it among others restaurants in the historic center. The restaurant has rustic spaces and offers a splendid view of the city. In summer customers can enjoy the typical South Tyrolean cuisine outside, with tables positioned in one of the most beautiful and popular streets of Bolzano. The restaurant has a capacity of about 130 seats, spread over two floors, in characteristic wood-paneled rooms. The dishes proposed reflect the typical tastes and flavors of South Tyrol. Each dish is expertly prepared to respect tradition, consisting of classic first courses such as “canederli”, “spätzle” and “schlutzkrapfen”. In addition to traditional dishes, you can also enjoy good pizza and a selection of gourmet pizzas. Furthermore, you can visit the restaurant’s cellar where there is a selection of wines from the best local and national wineries, and a selection of craft beers can accompany the dishes served. In addition, the restaurant offers premium meat dishes, including venison goulash, sliced ​​and mixed grills.

Located in the historic center of Bolzano near Piazza delle Erbe, it is a characteristic and welcoming restaurant; offers traditional dishes from South Tyrol accompanied by a selection of high-quality wines. Every day at lunch the menu changes to give space to the seasonality of the foods. All dishes on the menu are genuine with regional ingredients. The gastronomic proposals reflect the territory, such as beef goulash, homemade potato gnocchi with gorgonzola cheese and walnuts and seasonal soups with the chef’s imagination. To complete the rich menu there is the small but refined choice of desserts, exclusively homemade and a vast choice of wines. Here are some of the dishes prepared by the restaurant’s kitchen: Val Passiria trout fillet, potatoes with skin, butter, and horseradish; Tyrolean speck with smoked wild boar salami, organic mountain cheese, pickled cucumbers, horseradish; venison carpaccio, mixed mushrooms in oil, parmesan flakes, rocket; chestnut, apple and chilli soup; barley soup, smoked meat and crispy speck; homemade Tyrolean “Mezzelune”, stuffed with spinach and ricotta, melted butter and parmesan; homemade lasagna with pumpkin, chestnuts and taleggio cheese; salted salmon with lime juice, mashed potatoes and turnip greens; Viennese sausages with fries.

The Magdalener Hof restaurant is located two kilometers from the historical center and has been recently refurbished to create an elegant and informal atmosphere. The restaurant is on two floors connected by stairs: on the ground floor, there is a bar with some tables and a terrace. The 14th-century cellar, reachable by elevator, is enriched with great Italian wines and French classics, without forgetting the local wines. The pizza restaurant with the wood oven is located in the main building and offers an excellent menu, which can be customized to take into account food allergies or intolerances. Two restaurant rooms, a rustic Tyrolean Stube, a large sunny terrace, and the well-kept garden with gazebo make the Magdalener Hof the ideal venue for family celebrations and ceremonies. The “Magdas,” as the citizens of Bolzano called it, offers delicious Mediterranean and local dishes. The home-smoked salmon, the truffle pizza from the wood-fired oven, or the seafood paella for two is a must-try. The pizzas are also excellent. The terrace awaits you for lunches and dinners in the open air and under the stars in spring and summer. In winter, on the other hand, in the traditional Stube, you can taste a wide choice of typical dishes of the South Tyrolean tradition.