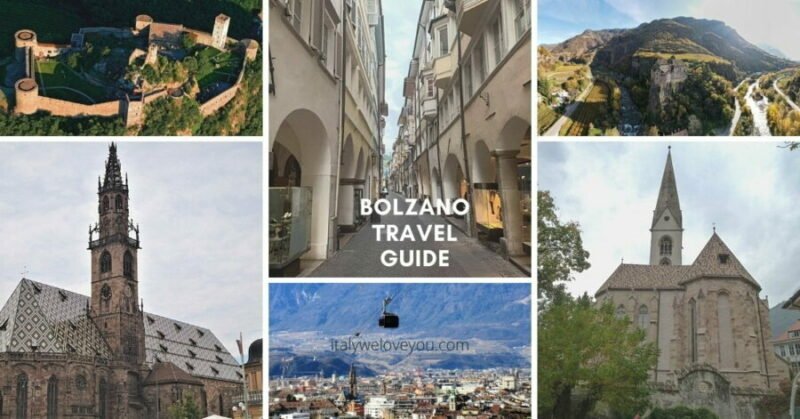 Bolzano, the capital of South Tyrol, is a city with an orderly and quiet atmosphere. Bolzano develops in a valley at the confluence of the Isarco, Adige, and Talvera rivers. All around the Dolomite peaks of Sciliar and Catinaccio which, by limiting the flow of currents from the cold area, favor the emergence of a microclimate that is almost Mediterranean in the summer. In this city the German language and culture is widespread.

Things to do in Bolzano

The Cathedral of Bolzano, with its precious green and gold roof, is located in Walther Square and is the most important religious building in the city. The cathedral, dedicated to Santa Maria Assunta, is in Gothic style and was finished in 1420, but its origins are much older.  The bell tower, 65 meters high, was added in 1517 and every Saturday and Sunday plays different melodies thanks to its 25 bells and represents a reference for visitors who move around the city. Outside, the red and yellow marble cladding with Gothic elements can be admired. Also on the outside, there is also the “Porticina del Vino”, a Gothic portal decorated with various statues, including those of two winemakers on the right and left edges: a historical testimony of the importance of viticulture in this area, an activity that still has great economic importance today. Under the tower there is also a 15th century fresco made by students of Giotto’s school. The interior also houses part of the original frescoes from Giotto’s workshop, which date back to 1370 and once covered all the interiors. The cathedral is also worth a visit for the Gothic pulpit, the polychrome marble altar from 1720 and a Pietà from 1424. The most precious objects such as gold, silver, parchments and relics, are however kept in the Cathedral Museum: it is located near the bell tower and testifies to the wealth and devotion of the faithful over the centuries.

Piazza delle Erbe is another symbolic square of Bolzano: since the Middle Ages it has hosted the fruit and vegetable market, which is held every day except holidays and Saturdays and Sundays. Even today, as 800 years ago, the inhabitants of Bolzano come here to do their shopping: a walk along this square, with the alleys and the famous arcades that start from here, is the best way to breathe the quiet and Central European atmosphere of Bolzano. Here you can also admire the Fountain of Neptune, one of the 100 most beautiful fountains in Italy: it is a fountain built in 1725 with marble and bronze, which depicts the god of the sea with three dolphins, resting on three large shells.

From Piazza delle Erbe the arcades branch off along a pedestrian street of 300 meters which has always been the heart of the shopping area of the city. The arcades are the oldest street in Bolzano, very popular since the Middle Ages. The premises under the arcades served as a dwelling and also as a warehouse because they developed for at least three levels underground to store the goods. Today you will find boutiques, shops, bars and restaurants, surrounded by buildings decorated with stuccoes, frescoes and in some cases portions of the ancient walls that closed the historic center of Bolzano. While shopping, you can also admire the Gothic and Baroque decorations of the old Town Hall of Bolzano and the original marble stalls of the ancient fish market.

The Dominican Church is the other church in Bolzano that is certainly worth a visit. Built in 1272, the Church is located not far from the Cathedral and is famous above all for its cycles of frescoes. The paintings that decorate the church, the convent and the cloister represent a testimony of Bolzano’s painting from the fourteenth century to the sixteenth century. Painting that is affected by the German artistic influence. In particular, the two chapels of San Giovanni and Santa Caterina should be visited. The paintings by Hans Stotzinger, Friederich Pacher and Sylvester Muller, clearly of German influence, deserve attention. The religious building went through a long period of decline, which began at the end of the 1700s and culminated in bombing during the Second World War. Nonetheless, starting from the mid-50s of the last century, the restoration proceeded, saving everything that could be saved.

The South Tyrol Museum of Archeology is located in the historic center of Bolzano and is rightly famous for Ötzi, the ice man. The Museum was almost entirely dedicated to the mummy and to an in-depth study of the objects found alongside it. The mummy belongs to a man who lived in these areas more than 4,000 years ago. The man from Similaun, named after the place where he was discovered, is the only naturally formed mummy that has survived so well preserved, and with all its equipment. At the museum you can admire the ice man with his original kit: clothes, quiver, saddlebag, and a series of tools that have allowed to accurately reconstruct his daily life. In addition to the fascinating discovery of the man who came from the ice, the museum documents the history of this place in great detail, from the Paleolithic onwards to the early Middle Ages.

For contemporary art lovers, we should also mention the Museion, the museum of modern and contemporary art in Bolzano, which is housed in a modern office. The collection has over 4500 works of art and is presented in rotation in thematic itineraries, often in dialogue with other public and private collections. There are also many activities put in place during the year including temporary exhibitions and guided tours. Museion’s mission is to find new talents and new works of art in the international arena.

If, on the other hand, you are interested in learning more about the South Tyrolean landscape from a geological, botanical and zoological point of view, the Museum of Natural Sciences is a must during your stay in Bolzano. The birth and development of Dolomites are explained in the most popular way possible, precisely to make knowledge and concepts that are highly specialized accessible. In addition to the permanent exhibition, temporary exhibitions are set up in the museum and guided tours and educational activities are organized.

After the Cathedral and the Dominican Church, the Old Parish Church of Gries is also worth seeing. This church is about 2 kilometers from both Piazza Walther and Piazza delle Erbe and houses two treasures of South Tyrolean sacred art: a 13th-century wooden crucifix of foreign manufacture and a polychrome altar by the Austrian painter and carver Michael Pacher. Not far away, in the center of the homonymous square (Piazza Gries) there is also an ancient convent that originally belonged to the Augustinian friars and later to the Benedictines. Inside, an interesting Museum of Nativity Scenes and a Baroque church dedicated to St. Augustine. A little more than 100 meters from the Old Parish Church of Gries then begins the Guncino walk, one of the most beautiful hiking trails in Bolzano.

The “Colle cable car” is the oldest cable car in the world: it was inaugurated in 1908 and allows tourists to be taken to 1134 meters above sea level. The cable car is a quiet, panoramic and characteristic way to reach the town of Colle. Colle, which can be reached by cable car, is the perfect place for an excursion outside Bolzano: you will find kiosks, bars and restaurants and mountain trails with varying degrees of difficulty, but above all an incomparable view of the glaciers and Dolomites. In just 7 minutes you reach the summit. Here is also the ancient “Maso Uhl” (a farm), which dates back to 1534 and has now been restored maintaining its original features. Today the farm houses a library and workshops for schools. “Masi” are the typical rural houses of Trentino Alto Adige and include houses, stables and rooms for the preparation of cheeses.

Firmiano Castle is one of the most important examples of defensive architecture in South Tyrol. The Castle stands in a strategic and panoramic position: on a large rock it dominates the valley and Bolzano. Since 2007, after a careful restoration, the White Tower of the castle houses the most important museum among those founded by the mountaineer Reinhold Messner, the current owner of the manor: a collection of objects from all over the world that testify that the fascinating relationship between man and mountain. In fact, the visit allows you to integrate the scientific approach of the Natural History Museum with a more humanistic one, in which the mountain is told from a spiritual point of view, also describing the evolution of mountaineering over the decades.

Roncolo Castle is the other obligatory destination for a holiday in Bolzano. It is so for the suggestive position, on a spur of rock overlooking the Talvera stream and, above all, for the medieval frescoes inside. Mural paintings with a profane subject commissioned by the brothers Niklaus and Franz Vintler who bought the building at the end of the 14th century. Several themes are dealt with: from literature, with the stories of Tristan and Isolde and King Arthur, to court life with the depiction of daily scenes of local nobles at the turn of the 13th and 14th centuries. Castel Roncolo can be reached either on foot along a wonderful promenade also equipped with a cycle path, or by public transport.

Lake Carezza is located in Val d’Ega, about 25 km from Bolzano and is one of the most famous and spectacular natural lakes in Trentino Alto Adige. Lake Carezza is a natural basin immersed in a forest of red and white firs, precious harmonic woods from which violins are still made today. In winter, the lake freezes, and both its size and depth vary according to the seasons, going from 6 meters deep in winter to 17 in spring, when the glaciers melt. Lake Carezza is known as Rainbow Lake due to the reflections of its waters. It is said that the lake was inhabited by a beautiful mermaid. A sorcerer, in love, created a rainbow on the lake to attract her to him. The frightened mermaid dived into the water to never get out, and the furious sorcerer shattered the rainbow into a thousand pieces, throwing it into the lake. The statue of the mermaid today is in the center of the lake, sometimes completely or partially submerged. At the edge of the lake, there is a path that can be followed on foot or by bicycle.

What to eat in Bolzano? The cuisine of Bolzano is substantial, rich, and above all of the highest quality. The dishes of Bolzano are affected by the proximity to Austria. You will find many specialties: first of all speck and cheeses, in particular Edelweiss, with mountain herbs, and the fragrant Bergbauernkäse, always accompanied with a good glass of wine and Schuttelbrot (rye bread).

Among the first courses, the protagonists are the “canederli”: born to recycle dry bread, today they come in many variations, dry or in broth. Also try the homemade pasta such as ravioli with spinach and barley soup. In addition to freshwater fish, the second courses not to be missed are venison goulash and pork with sauerkraut and potatoes. The meal ends with the delicious strudel (puff pastry roll with South Tyrolean apples, pine nuts and raisins), often accompanied by ice cream or whipped cream, and cakes: with chocolate, cheese or pears. Last but not least, it is impossible not to mention the famous Lagrein and Gewurztraminer wines.

Read also our article on the best restaurants in Bolzano.