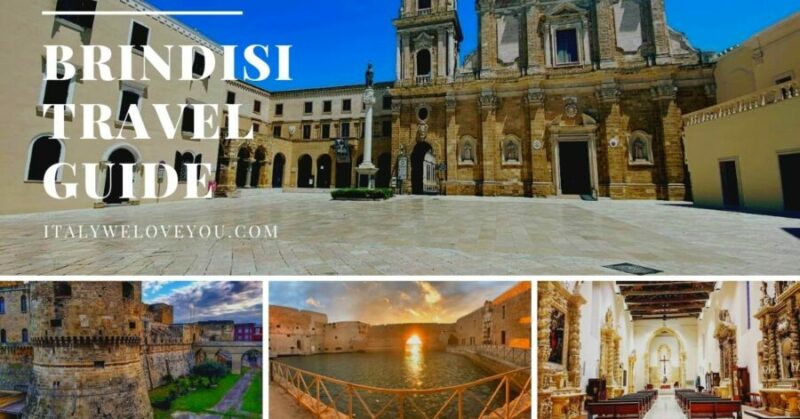 Brindisi is one of the most beautiful cities in Puglia, rich in history, culture, and beauty, and one of the most evocative natural ports in the Mediterranean Sea. Brindisi is a modern city that also hides medieval views and ruins of ancient Rome.

The city can be reached not only by car but also by train and plane. Brindisi airport (Salento Airport) is located about 5 kilometers away from the center and is the most practical and fastest way to reach the city. The port of Brindisi is also one of the most important ports in Italy, especially from a tourist point of view. It is from here, in fact, that the various connections with Greece and the main port cities of the peninsula depart. Built-in a natural inlet, it was already considered the gateway to the East in Roman times, because the ships that traded with Greece and Turkey departed from the port of Brindisi.

To visit the city of Brindisi and be able to see its main attractions you will need at least a weekend.

Things to do in Brindisi

The historic center of Brindisi

The historic center of Brindisi is a succession of medieval streets and buildings, churches with precious interiors, and glimpses of the sea. The Regina Margherita promenade is the ideal place to start the walk overlooking the harbor. Continuing up to the Virgil Staircase, it is possible to admire the remains of two ancient Roman columns, one of the symbols of the city. Their construction was commissioned by the emperor Trajan to represent the end of the Via Appia Antica, the road that connected Rome to Brindisi. Today of the two original columns only one remains to stand which, with its 18 meters high, stands out on the marble staircase leading to the port. From this position, you can admire a magnificent view of the port of Brindisi and on the opposite side of the canal the monument to the Italian Sailor, which can be seen from almost the entire city. It is a 68-meter high tower overlooking the harbor. Built-in 1933 following an architectural competition, it is dedicated to the memory of the Italian sailors who died at sea during the First World War. It is shaped like a rudder and has a chapel and a crypt. It is possible to visit it and climb to the top. It is also possible to take the sea shuttle which goes around the port and gives you a completely new perspective of the place. Right next to the staircase is the Belvedere Palace which houses the “Faldetta” Archaeological Collection. 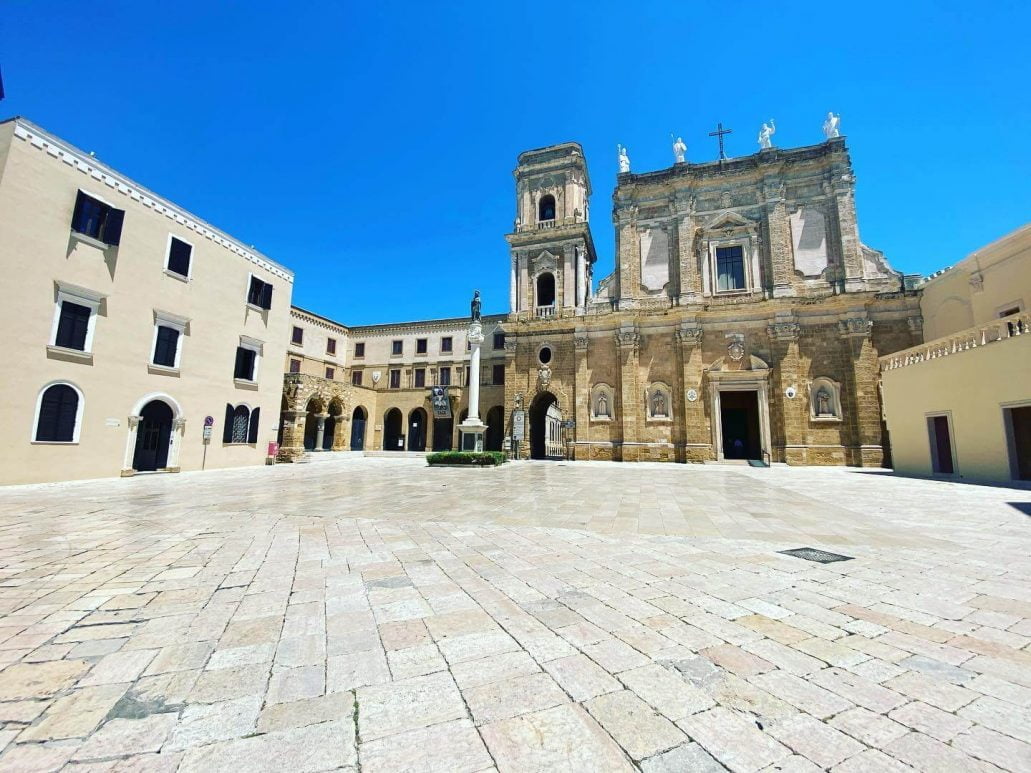 Among the places to visit in the city certainly stands out Piazza Duomo, the oldest square in the city as well as one of the most fascinating from a historical and architectural point of view. All the buildings that revolve around this square show a purely medieval and Roman style, an irrefutable sign of their origin. Among the most important monuments, the Cathedral of San Giovanni Battista deserves a place of honor, a building consecrated in 1089 which, over time, has been rebuilt several times. Other buildings of considerable interest are Palazzo Balsamo with the famous Loggia, Palazzo del Seminario, and the Provincial Archaeological Museum. The Museum preserves and exhibits all the archaeological remains found in the area. You can admire beautiful sculptures and everyday objects. Especially admire the Greek bronze statues, found in the sea during the archaeological excavations of 1992. Passing through the Portico of the Knights Templar, which today serves as the entrance to the Archaeological Museum, we continue with a visit to the interesting Palazzo Granafei Nervegna built-in 1565; the building has a Renaissance style with some Baroque influences, especially evident in the balconies. The first floor is dedicated to exhibition rooms where the Municipal Administration promotes countless exhibitions of considerable importance. 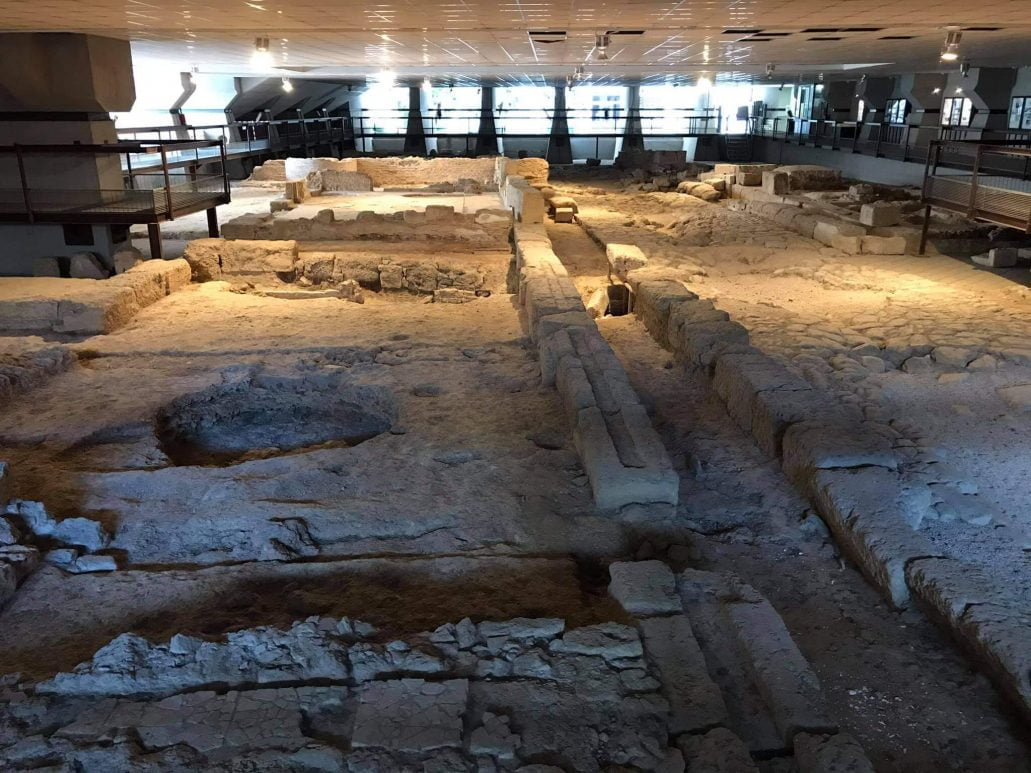 The archaeological area of San Pietro degli Schiavoni preserves the fascinating remains of a district of ancient Rome, just below the new Verdi Theater, which is striking for its futuristic architecture. Not far away is the Temple of S. Giovanni Sepolcro, a beautiful Romanesque church with a particular circular shape, built on the still visible remains of a Roman Domus. It is closed to worship but open to the public with guided tours. 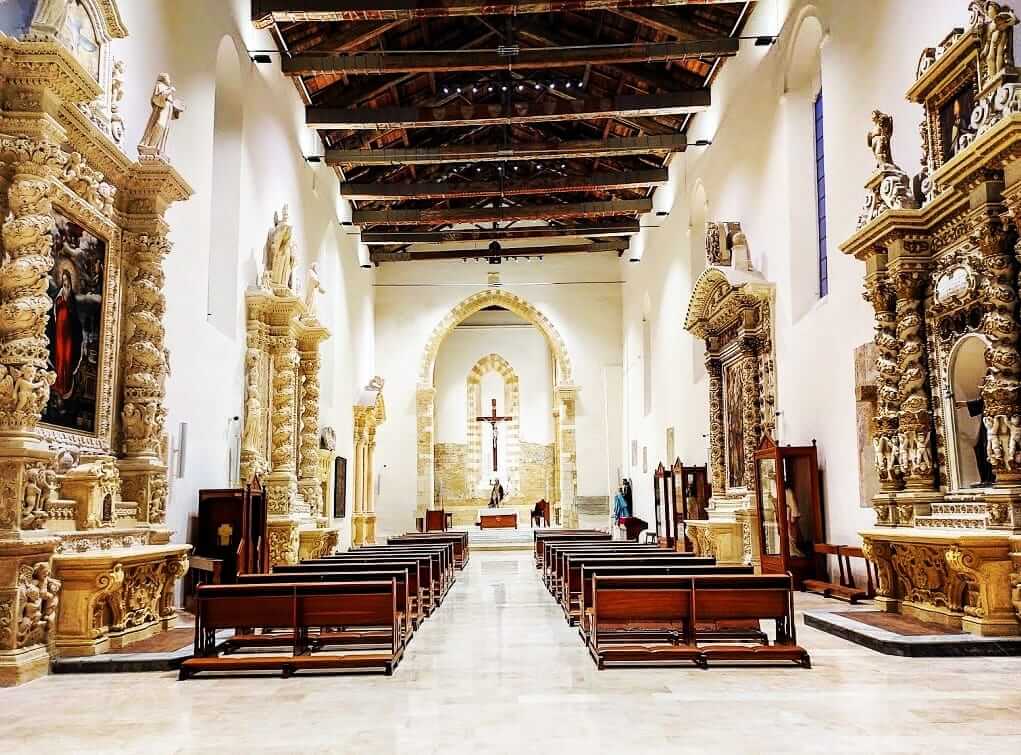 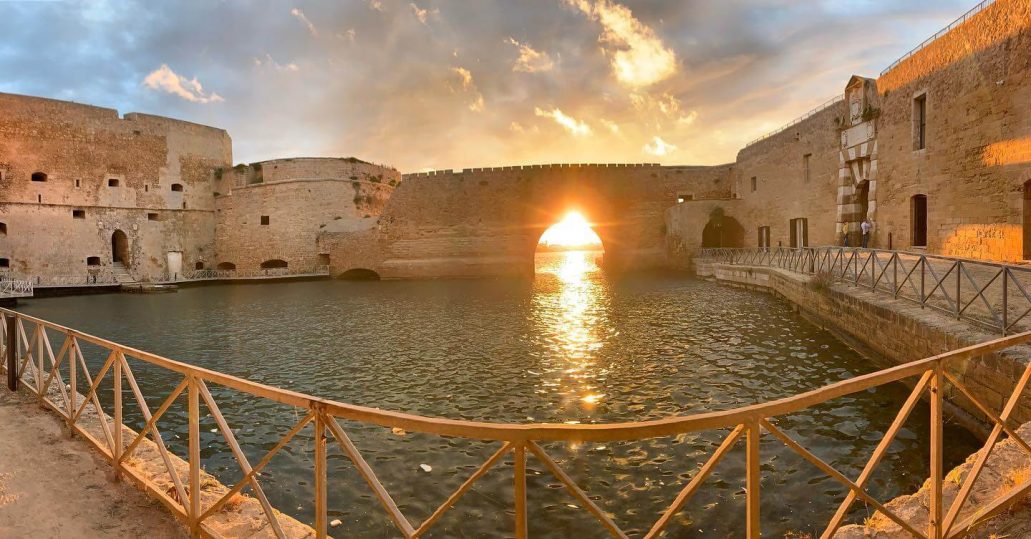 The Aragonese Castle is also called Castello a Mare (castle at the sea) because it is built on an island facing the port of Brindisi. It can be reached by boat, as it is located on a small island at the mouth of the port, the Island of Sant’Andrea. It consists of two fortresses, a triangular one facing the open sea and a circular one, within which a small port is hidden. It dates back to 1445 when Alfonso V of Aragon had a first tower built as a defensive outpost of the port on the remains of an ancient Benedictine abbey; the work was then extended and finally enclosed by bulwarks and fortifications. 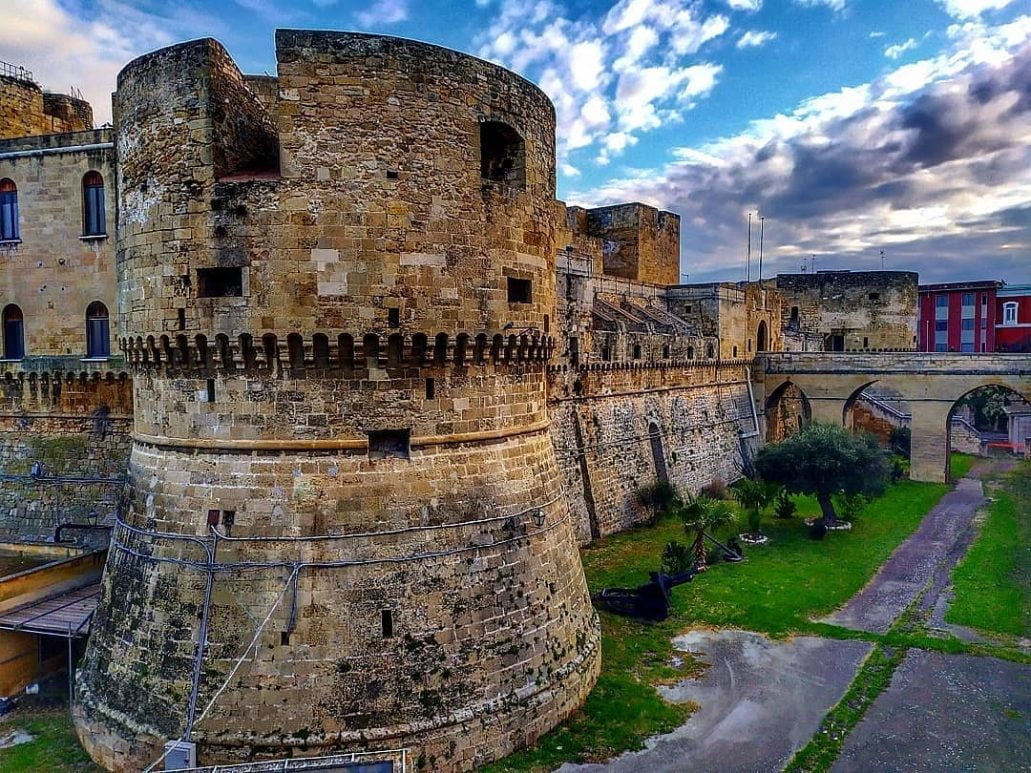 Our itinerary ends at Castello Svevo, the most famous monument in Brindisi which unfortunately can only be admired from the outside (it is a military area and is open to the public only in special periods with guided tours). The inhabitants of Brindisi call it the Castello di Terra or the Castello Grande (castle at the land or Great castle) to distinguish it from the Forte a Mare. This large trapezoidal-shaped fortress was part of the fortifications commissioned by Frederick II in Puglia and was intended to protect the city from enemy incursions. 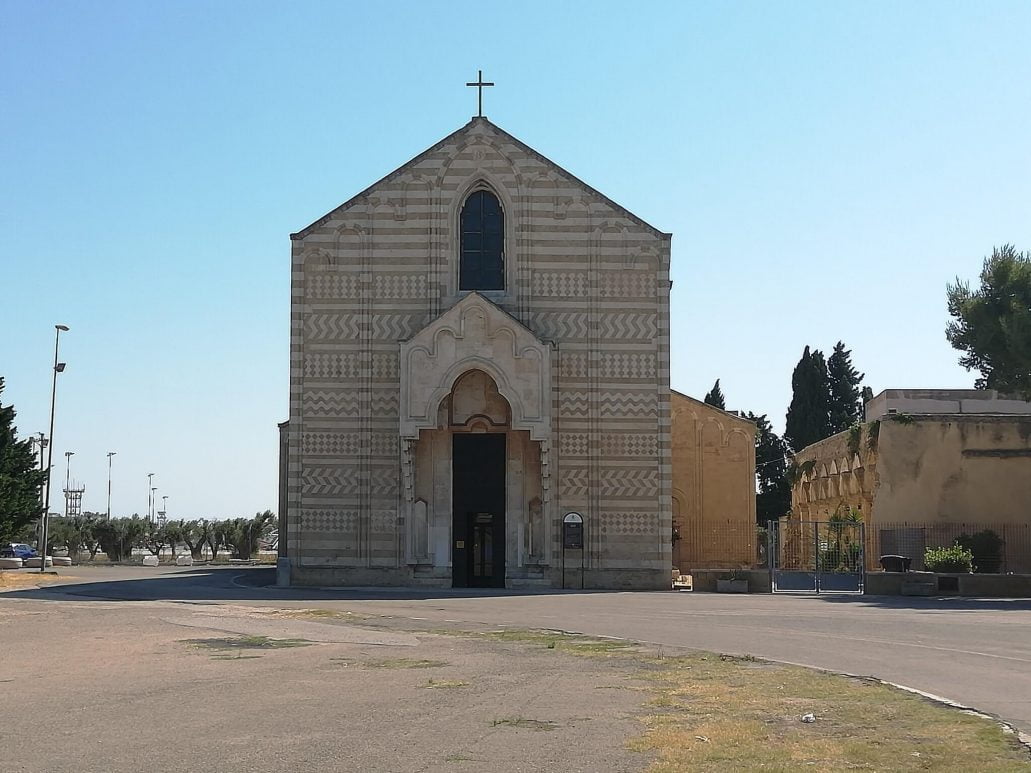 The Church of Santa Maria del Casale is a Romanesque-Gothic building located 2 kilometers north of Brindisi, near the Casale district, on the road to the airport. It is an unmissable stop that dates back to the 13th century and has been a National Monument since 1875. Internally the plan is a Latin cross with one nave and you will find a marble column that is believed to date back to the 9th century, and frescoes on the walls dating back to the 14th century: on the entrance is the Last Judgment by Rinaldo da Taranto.

Last but not least, the protected marine area of Torre Guaceto is located a few steps from Brindisi and is undoubtedly one of the most beautiful beaches in Salento

One of the best things to do to complete the visit to Brindisi is to taste the local specialties. First of all, being a seaside town, there are obviously many seafood specialties: fresh fish, seafood and shellfish. Another typical dish of Puglia is the “orecchiette“, hand-made pasta to eat with chickpeas or turnip sprouts sauteed with olive oil, garlic, and anchovies. Also try the omelette, a loaf of fried bread with tomato and mozzarella. You can also add the burrata cheese, typical of Puglia. Finally, we have the “spumone”, a frozen and creamy dessert made with hazelnuts, chocolate, and stracciatella.