Destroyed 9 times by earthquakes, eruptions, invasions, Catania has been rebuilt 9 times more beautiful than before. The city we see now is the one of the last reconstructions, in 1693, in the Baroque style, a style in which almost all the noble palaces and city churches were rebuilt: an architectural complex of exceptional value so that the historic center of Catania is protected by ‘UNESCO as a World Heritage Site.

Piazza del Duomo (Cathedral square) is the heart of the city and welcomes visitors with the 1736 fountain located in the very center of the square: the Elephant Fountain, the symbol of Catania. This fountain depicts an elephant carved in black lava, above which an Egyptian obelisk stands. Legend has it that this statue has the power to appease the wrath of the Etna volcano. The fountain is framed by the Palazzo degli Elefanti and the Palazzo dei Chierici is joined to the Cathedral by a passage above the “Porta Uzeda” gate.

Palazzo degli Elefanti (Elephant Palace), today the seat of the Town Hall, combines the Baroque style with the neoclassical one. Two 18th-century carriages are kept in the hall of the Town Hall, one of which is used on February 3 to transport the mayor to the church of San Biagio. Also from Palazzo degli Elefanti, to be precise from the grandstand on the first floor after the entrance hall, the public authorities of Catania attend the celebrations and fires in honor of the Patron Saint.

Built on the remains of ancient baths, the Cathedral of Sant’Agata has been destroyed and rebuilt several times after earthquakes and eruptions of Etna. The first construction dates back to around 1070 and from that time only the apse remains while everything else has been destroyed and rebuilt from scratch. The current appearance of the Cathedral dates back to the works carried out from 1734 to 1761. The facade is made entirely of white Carrara marble with grafted columns from the ancient Roman theater. There are numerous statues of Sant’Agata, patron saint of the city. The interior is a Latin cross divided into three naves. Protected behind a gate is the chapel of Sant’Agata with the room that contains his relics. The patron saint of the city is celebrated every 5th February during the feast of Sant’Agata. In front of the altar is the tomb of Vincenzo Bellini, the famous musician from Catania.

Not far from the Cathedral and Palazzo degli Elefanti there is another monument that absolutely deserves to be visited. We are talking about the Badia di Sant’Agata Church in Corso Vittorio Emanuele. From the facade to the decorations of the portal, up to the imposing dome, everything is of great artistic value. The interior, in the form of a Greek cross and finely decorated, is at the height of the external splendor. Also worth seeing are the statues of St. Euplio, St. Joseph, St. Agatha, the Immaculate Conception and St. Benedict. It is also possible to climb its dome (for a fee) from which you can enjoy a fantastic view of the city.

The most important and scenic street in Catania starts from Piazza del Duomo: Via Etnea, which takes its name from the fact that it goes in the direction of Etna, which is always visible during the 3 km walk. Via Etnea is the shopping street, largely pedestrianized, as well as a strolling place for people from Catania and tourists. Along the way, it is possible to take a trip into the Sicilian Baroque because almost all the palaces and churches were built after the disastrous earthquake of 1693 that destroyed Catania. Do not miss Piazza Università, the square with the buildings of the University and San Giuliano, and the 7 Baroque churches, including the splendid Collegiate Church. The walk ends in Piazza Cavour, the square that the people of Catania call “Il Borgo” (The village) because until 1693 it was outside the city walls.

Also worth seeing are the gardens of Villa Bellini, one of the places to visit in Catania perfect for enjoying a little cool on hot summer days. The park, located in Via Etnea, is open until 22:00. You can walk among its large trees and its many fountains or simply sit on a bench in the shade. The place is really nice, with even a playground for children. Events and concerts are regularly organized here. You can also take the opportunity to visit Villa Bellini, when it is open to the public.

Via dei Crociferi is another street you absolutely must visit in Catania due to the presence of 4 churches in just 200 meters, all masterpieces of Baroque art. You enter the street from the Arch of San Benedetto which connects the church of the same name with the Benedictine Convent. The church is famous for the “Angel’s staircase”, a marble staircase with statues of angels. Immediately after you meet the Church of San Francesco Borgia and the Jesuit College with a beautiful internal cloister with arcades and columns. In front of the college is the church of San Giuliano, considered one of the most successful examples of Catania and Sicilian Baroque. The walk ends in Villa Cerami, a green oasis that houses the Faculty of Law.

In case you still have some time available, go and see the ancient Roman Theater, near Piazza del Duomo. You will be surprised by its architecture and its vaults. The lava stone and the bricks with which it was built were embellished with marble decorations. You will surely be amazed to see this ancient theater among the modern buildings.

The former Benedictine Monastery of Catania is considered one of the largest monastic complexes in Europe. Today it houses the University’s Department of Human Sciences and can be visited. This allows you to retrace the 500 years of life of this place that hosted the monks and then barracks, schools, up to its current destination. Today the Monastery is a cultural space where exhibitions, workshops and conferences are also held. It is possible to visit it both freely and with a tour guide.

The Catania Theater, built-in 1890, is named after the composer Vincenzo Bellini. With a guided tour you can visit the hall with four tiers of boxes and the richly decorated gallery. The ceiling is frescoed with images of Bellini and his most famous works: Norma, La sonnambula, I puritani and Il pirata. Could not miss the bronze statue of Vincenzo Bellini, the work by Salvo Giordano.

Sicily and Catania in particular, during the Second World War, paid a very high price. For this reason, a Landing Museum was opened in the city. The museum retraces this particular and decisive historical phase and does so in the most truthful way possible, illustrating the terrible everyday life that marked the life of the people of Catania in those terrible days of the summer of 1943. There are even those who compared this museum in Catania to that one in Arromanches which retraces the phases of the Normandy landings. The Historical Museum of the Landing in Sicily 1943 is located in Viale Africa, not far from the Central Station and about 10 minutes walk from the historic center.

Even the subsoil of Catania, with galleries extending for hundreds of meters, is a characteristic of the city. Here the underground quarries served as anti-aircraft shelters during the Second World War, used by the people of Catania to protect themselves from the incessant Anglo-American bombing preparatory to the landing in July 1943. Going to discover the underground of the Sicilian city is, therefore, an absolutely must.

The Ursino Castle is also worth a visit; it is an ancient Norman fortress that now houses the Civic Museum (which can be visited for free). Originally, this castle was located on top of a hill and was built on a cliff overlooking the sea. It is really difficult to imagine it, since today it is located about 1 km inland. The various earthquakes and the terrible volcanic eruption of Etna in 1669 totally changed the landscape of this area. The lava flows probably surrounded the castle without causing damage. The castle museum houses an important archaeological collection consisting of ceramic vases, sculptures and numerous paintings. 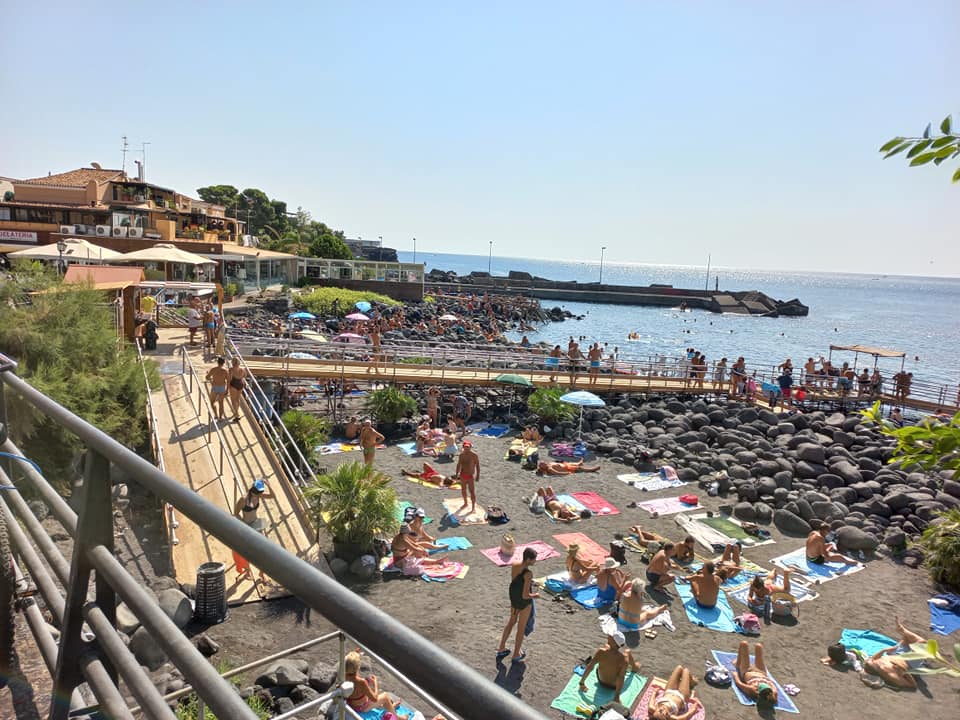 “San Giovanni Li Cuti” is a seaside village in the center of Catania, a small fishing village “incorporated” by the surrounding modern buildings which, paradoxically, has contributed to increasing the charm of this locality which has become, over the years, one of the of the Catania nightlife. The fishing boats in the marina are always ready to supply the restaurants in the area daily with excellent fresh fish. There is also a black sand beach that the Municipality has equipped with showers, changing rooms, chemical toilets and walkways for the disabled. In short, by day and by night, in summer but also in winter, San Giovanni Li Cuti is one of the unmissable places in Catania, not surprisingly popular with locals and tourists.

But the true soul of Catania can be found by visiting its popular markets. There are several markets but there are two that cannot be missed. The first one is the “Pescheria” which is located behind Piazza del Duomo and the second one is the “Fera ‘o Luni”, in Piazza Carlo Alberto. La Pescheria is a fish market, the most colorful and animated and therefore characteristic of Catania. Not far away, in Piazza Carlo Alberto, takes place the “Fera ‘o Luni”, a daily market of fruit, clothes, toys and other merchandise. 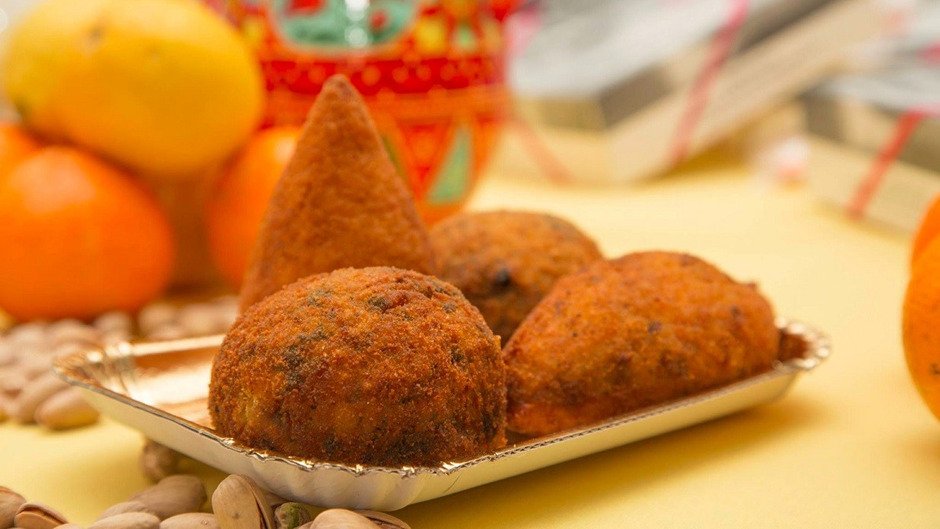 What to eat in Catania? The famous “arancini” (rice balls and sauce, with a conical shape inspired by Etna), the “crispelle” (dough stuffed with anchovies or ricotta and fried in oil), roasted artichokes. Pasta alla Norma (with eggplant), pasta with sardines and “caponata” (fried vegetables). As for the desserts we have: cassata, cannoli with ricotta, Iris (fried or baked desserts with various fillings), Sant’Agata olives, brioche with granita and ice creams. Horse meat is an authentic passion of the people of Catania. From meatballs to sausages, horse meat is the hallmark of Catania’s gastronomy. Via del Plebiscito is the undisputed realm of horse meat eaters: here there are trattorias that offer a true Catania experience and that allow you to eat at an affordable price. 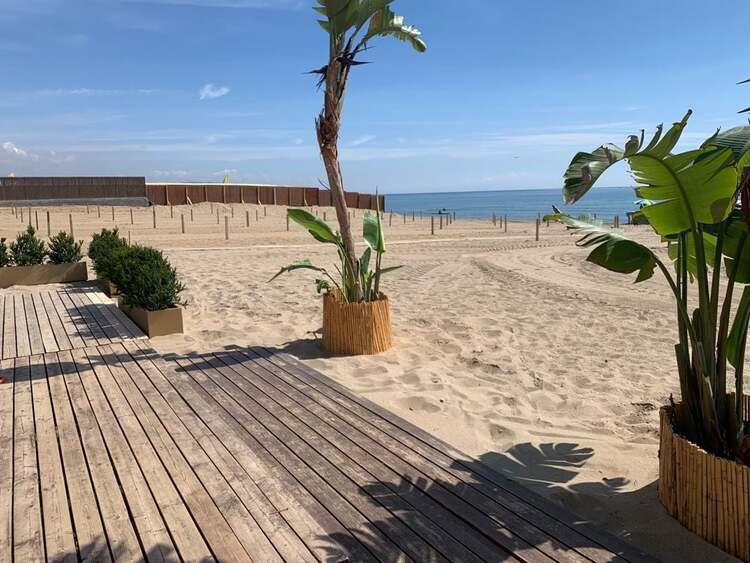 Catania, among other things, is also a seaside resort. Starting from “Plaia”, 18 kilometers of coastline south of the city, passing through San Marco di Catalbiano, Praiola di Giarre, Foce Simeto, Marina di Cottone Fiumefreddo and the other beaches, there is something for all tastes and needs. Equipped beaches; free beaches; pebble beaches; more or less hidden bays. Obviously, the beach of Plaia remains the main point of reference for residents and tourists. First of all because it is easy to reach, but above all because nothing is really missing: bathing establishments; hotel facilities; parking lots; Café; restaurants and a sea that has nothing to envy to many of the most celebrated tourist destinations in the Mediterranean Sea.

When in Catania, you cannot fail to visit Etna, the highest active volcano in Europe that offers spectacles of lava and fire. Those who want to see it much closer can take advantage of the many excursions offered by tour operators, agencies and individual tourist guides. You can visit the Valle del Bove, the summit craters, there are also about 200 caves used since ancient times as a refuge, cemeteries, sacred places, to store snow and so on. You can go on excursions by jeep, downhill skiing, walking, or a more comfortable panoramic tour with the Circumetnea Railway that runs around the lower ring of the volcano. You can also take a bus or go there by car: Etna is in fact about 20 kilometers from Catania. In any case, it is possible to reach the 1st level of Etna independently. To reach the crater, the ascent to the second level must be done exclusively by a guided minibus. The trip to Etna can also be done at the end of the afternoon, in order to enjoy the sunset on the volcano.