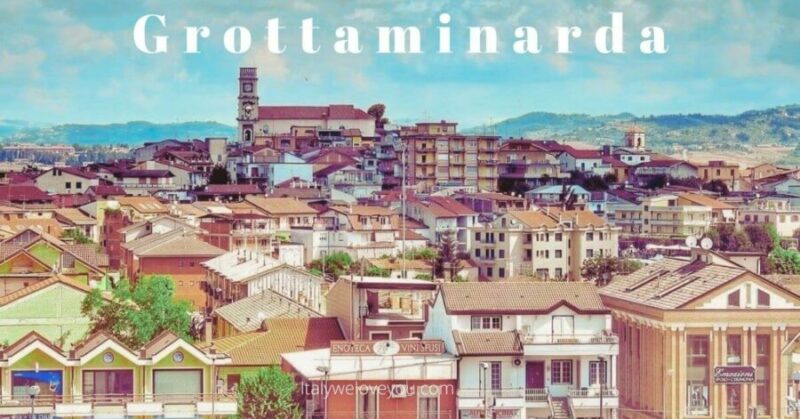 Grottaminarda is a small town in the Province of Avellino, in Italy, with a population of about 8,000 inhabitants. Being inland, Grottaminarda is characterized by a temperate climate in which mild summers alternate with cold winters.

The municipal territory is included in the seismic district of Irpinia. The town was in fact, heavily damaged by the Irpinia earthquakes in 1694, in 1732 (whose epicenter was very close to Grottaminarda), and then again in 1980.

In Roman times this territory fell under the jurisdiction of the nearby colony of Aeclanum (Passo di Mirabella) and was dotted with the presence of well-organized villas, as evidenced by the numerous ceramic fragments in common use, architectural elements in marble and local limestone (columns, frames, capitals, squared blocks), coins and funerary inscriptions, which took place in the localities of Sant’Andrea di Carpignano, Bosco, Versura, Ruvitiello and near the Ufita river. The town, under the name of Grottaminarda, according to the testimony of Scipione Ammirato, appears however only starting from 1229. 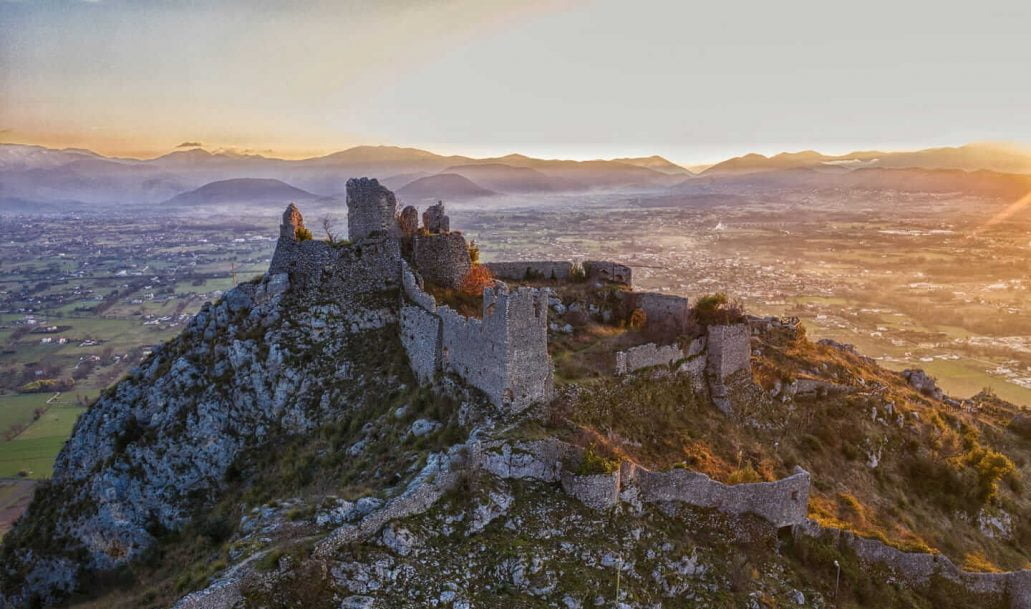 The main monument of the town is the Aquino medieval castle, which was damaged several times by earthquakes but which nevertheless managed to fulfill its defensive role until the wars of the 16th century. A cylindrical tower, about 14 meters high with a diameter of 12 meters, and a square tower, of which the base remains, can be seen at the corners of the side of the fort facing west, in a dominant position. Following the earthquakes of September 1694 and November 1732, the almost trapezoidal building was transformed into a stately home. Since 1988 it has been owned by the municipality. For some years, until 2008, the structure housed the local headquarters of the Center for Seismology and Seismic Engineering. Since 2009, part of the castle houses a museum and the municipal library.

Of particular interest is the Municipal Antiquarium Museum of Grottaminarda, annexed to the Municipal Library, located inside the Aquino Castle. The Antiquarium, with its finds, testifies to the presence of man in this area since the Neolithic, that is, from the 5th Millennium BC until the Roman era.

The ceramic vases of the final Neolithic period, the two axes representing the lithic industry of the Copper Age, the weights, an unguentary, a red-figure vase and a range of votive artifacts stand out for their remarkable workmanship which testify to the Bronze and Iron Ages.

Not only numerous ceramic creations represent the Roman era, but also marble fragments and a male portrait that probably represents the figure of Octavian Augustus.

Furthermore, of great importance and historical value, the approximately 200 coins ranging from the Roman Republican to the Medieval period should be remembered. But in the Museum it is also possible to grasp the signs of the contemporary age, through photographs, historical, political and social documents that represent this community. 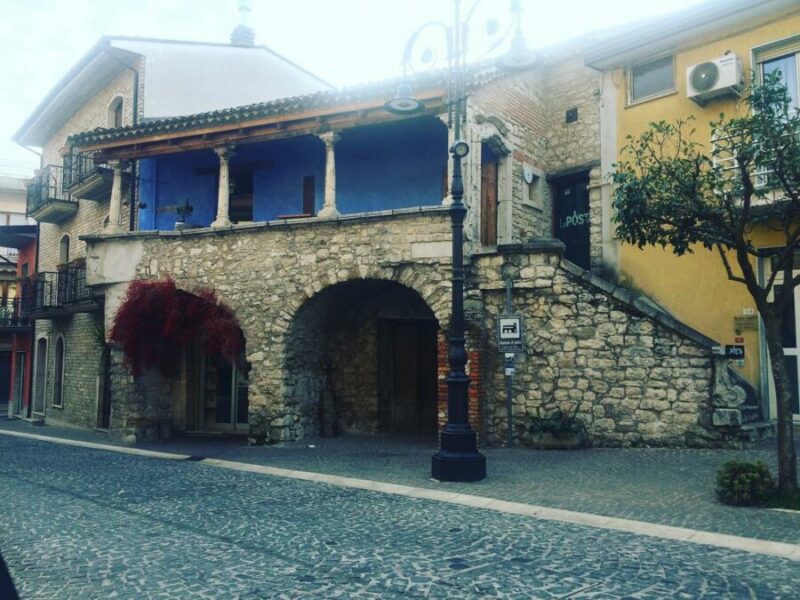 Another monument of interest is the Aragonese Customs House (Dogana Aragonese), built in 1467 as a collection point for the feudal rights of transhumance in 1467 by the noble Ladislao d’Aquino along what would later become the very popular national road of Puglia. Enlarged in 1774 and later used as a post office as well as for the change of horses and the refreshment of passengers, the customs house was declared a national monument in 1930. 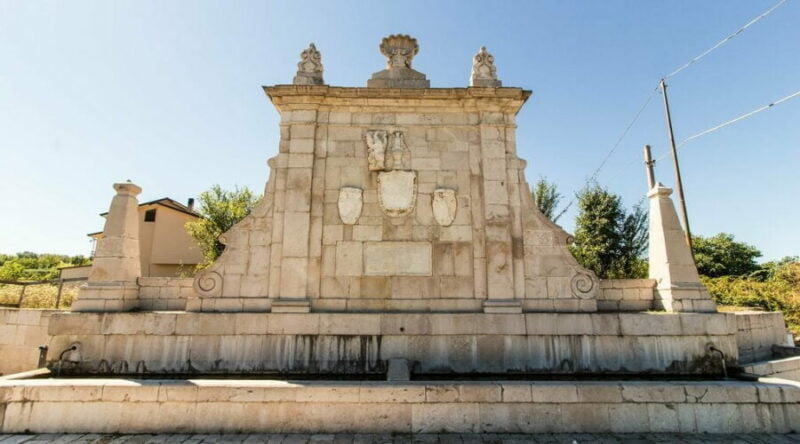 The King’s Fountain was built in 1606 along the royal road of Puglia on a project by Scipione Galluccio and Andrea Insano; it was then restored during the first half of the 18th century. Made with blocks of white limestone, the fountain, in Baroque style, shows on the sides two truncated-pyramidal obelisks. The Bourbon coat of arms is carved in relief on the fountain.

The Civil Fountain, on the other hand, was built in 1875 on a project by the engineer Raffaeled’Agostino; it is characterized by its oval cup shape.

A few meters from the Aquino Castle is the church of Santa Maria Maggiore, built in 1478 but completely rebuilt in the second half of the eighteenth century on a project by the architect Ciriaco di Silva, a pupil of Vaccaro, after the religious building was demolished following the damage caused by the disastrous earthquake of 1732. It has a Latin cross structure, with a central nave and side chapels in Baroque style. The stucco decorations of the walls and vaults, in Baroque style, are the work of the Neapolitan artists Nicola Massaro and Gaetano Amoroso, who also created the high altar in 1761 by carving numerous polychrome marbles. In the church, there are paintings of the eighteenth century, including an oil on canvas depicting St. Thomas and St. James (former protector of the city), attributed to the Neapolitan painter Antonio Sarnelli, and a ceiling fresco from 1768 representing the glorification of the Assumption, by the painter Matteo Vigilante. Also inside the church, in addition to the artistic eighteenth-century marble baptistery with silver door, the work by Pasquale d’Agostino, there are silver monstrances from the mid-eighteenth century, a chalice in solid gold of the Neapolitan school of 1833, minor altars in polychrome marble and a monumental pipe organ from 1779 made by the craftsman Michele Vigilante. Next to the church is the bell tower, built between 1712 and 1766 by Ciriaco di Silva, based on a design by Vanvitelli. It has a square base and measures 36 meters in height. The civic clock has been placed there since 1871.

Another church is that of St. Michael, built in 1541 on an ancient chapel dedicated to the Archangel located inside a cave. The church is already mentioned in a document of 1178. Rebuilt in 1541, after the demolitions carried out following the earthquake that hit the town in 1512, the building was abandoned after the new collapses caused by the earthquake of 1732 and restored only a few decades later. Of the ancient pre-seventeenth-century ecclesiastical structure, only the bell tower built in the 10th century and enlarged in the 11th-12th century remains. The interior of the church has a single nave, while along the walls there are a series of niches in which the baptismal font, wooden confessionals and marble altars are arranged. Relief stuccoes with Baroque-style motifs create remarkable decorative effects inside: the eighteenth-century wooden statue depicting St. Michael killing the devil is precious. Also interesting are the wooden choir and an ancient organ, some murals and canvas paintings with sacred subjects.

A few meters from the church of Saint Michael is the church of St. Thomas Aquinas, built-in 1636 by the homonym Congrega on a previous chapel of 1528. The earthquake of 1980 heavily damaged the ancient church, which was rebuilt in the 1990s. Inside it preserves a life-size wooden “Pietà” from the first half of the sixteenth century and a brass and silver bust depicting St. Thomas Aquinas.

Attested in the 16th century, the Church of Santa Maria del Rosario, after the 1980 earthquake, was completely rebuilt. It was consecrated in 2000. In the premises adjacent to the church there is a permanent exhibition on the religious congregations of Grottaminarda.

Sanctuary of the Madonna di Carpignano

Last but not least, 5 km from Grottaminarda, in the hamlet of Carpignano, there is finally the sanctuary of the Madonna di Carpignano. The church, built in the early twentieth century on the site of an ancient chapel of the Teutonic Order, was almost entirely rebuilt after the 1980 earthquake. Today the sanctuary shows a simple facade with a stone portal and an upper niche with an image of the Madonna. Flanked is the bell tower, on five levels, with large windows and civic clock. Inside the church there is a panel depicting the Madonna and Child. According to legend, this painting was found by some shepherds in 1150, in the hollow of a large tree. The modern Convent of the Mercedari Fathers is annexed to the church, the original layout of which dates back to 1901.

As for the holidays, the important Immaculate Conception Fair is held in Grottaminarda on 8 December. But the event that in the second half of August attracts most of the populations of the district is the so-called “Festone” (Big festival), which has been held since 1889 in honor of San Tommaso, San Antonio and San Rocco, whose statues, carried in procession through the town, they wear robes richly adorned with gold jewels, donated over the years by the numerous faithful who always crowd the streets of the town for three days.

Among the other local festivals, always with a religious background, there are those in honor of San Antonio “Piccirillo”, of San Michele Arcangelo (29 September), of Santa Lucia (13 December) and of Padre Pio from Pietralcina. Finally, the first Sunday of September is dedicated every year to the veneration of the Madonna di Carpignano, in the hamlet of the same name.

Finally, we mention the typical Grottaminarda dishes, including the “ciambottella“, spicy peppers with tomato, or the “cicatielli col pulieio” (a spontaneous aromatic herb typical of the land of Irpinia, already known in Roman times). Also well known are the ways of cooking cod, the only kind of fish that in the past it was possible to find in the hinterland given the possibility of preserving it in brine; we mention the “baccalà alla pertecaregna“, so-called because it was brought by the women of the house to the laborers who plowed the land, or the “baccalà a ciambottella“, cooked in the sauce with peppers. As regards the production of wine, a prevalence of Aglianico vines is noted.