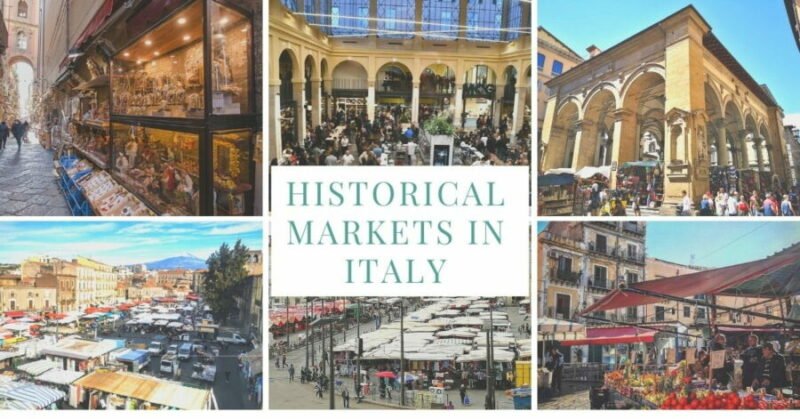 The market has always been the place par excellence where the lives and stories of each city’s inhabitants intertwine. There are many historical markets in Italy, a fundamental stop for tourists who want to understand the essence of Italian culture fully. Indeed, we can say that the city’s history is often hidden behind the stalls of its historic markets, its local products, traditions, and the opportunity to taste local dishes. The historical markets, which are found in many large and small cities, are therefore part of that cultural heritage that makes Italy a destination to be discovered.

It is the main one of the historic Palermo markets, very popular with citizens, located in the city center. The origin of the name is perhaps due to the village of Balhara, near the town of Monreale, where the Arab merchants arrived. In Ballarò, you will be attracted by vendors who scream in the local dialect to attract passers-by and invite them to taste and buy something, offering the best firstfruits of the Sicilian countryside and the city’s gastronomic specialties. For a cheerful parenthesis, then, there is a sort of lottery that gives away market products, especially food: a man sells numbered tickets from a pad, and when he finishes them, he proceeds to draw. If they can hear their number called in the crowd, the lucky ones will win some vegetables, cheese, or meat. Among the real weekend, stalls are added the “buffittieri” banquets who prepare street food by spreading the scent of fried anchovies, chickpea “panelle” or potato croquettes in the air; so you can take advantage of it for a quick, cheap and delicious meal. Other delights are the “arancini” and the “sfinciuni,” thick and very soft slices of pizza-flavored with tomato, cheese, onion, and anchovies. Or you will meet the “purparo,” which cooks fresh octopus in a pot of salted water and serves it with lemon and parsley on the spot.

Read also: Things to do in Palermo

Catania is no less than Palermo, as one of its most important markets demonstrates: “La Fera o Luni.” Literally, it is called “Monday fair,” but this market takes place every day from Monday to Saturday in Carlo Alberto Square. An exciting whirlwind of voices and colors mingle at the Catania market: here authentic Sicilians meet Indian, African, and Chinese sellers, not to mention – obviously – the large number of tourists who take part in the show in the summer season. A show that began centuries ago, when Catania was dominated by the Spaniards and the “Fera o Luni” was set up in front of the Collegiate Basilica; later, after the terrible earthquake of the late XVII century, the market was moved to University Square and then moved to the current Carlo Alberto Square in the XIX century. Also, here, as in Palermo, the cries of traders resound in the air to attract customers.

Read also: Things to do in Catania

Bologna boasts several historical markets, but the most characteristic one is the Mercato di Mezzo (Middle Market), right in the city’s heart. The name probably dates back to before 1400, when the area was dedicated to the grain trade. The streets that form the so-called Quadrilatero, in which the Mercato di Mezzo develops, have eloquent names, which recall the ancient commercial activities exercised there: Via degli Orefici, via Calzolerie, via Pescherie Vecchie, etc …

Visiting the market today means immersing yourself in the renowned Bolognese culinary tradition’s colors and flavors in the evocative setting of medieval buildings. Here are concentrated the shops of butchers, bakers, cheesemakers, and gardeners. But Mercato di Mezzo is also the name chosen for a brand new shopping center, a cross between the modern supermarket and the typical market of the past, located in a XIX century building inside the Quadrilatero. In this 3-story building, for a total of 740 square meters, there is space for the classic food vendors and a craft brewery, and a wine shop.

Read also: Things to do in Bologna

The seat of the covered market in Genoa will seem unique to you: the building that houses it was, in fact, born as a convent. But the structure was never finished, and at the end of the XIX century, the stalls that until then occupied De Ferrari Square moved to the cloister’s spaces. In 1899 the Mercato Orientale (Oriental Market) of Genoa was inaugurated, so-called for its position next to the eastern city gate, attracting tourists and locals. It can be recognized by the entrance overlooking XX Settembre Street, decorated with a colorful riot of flowers. Those who want to visit the Oriental Market will find all kinds of gastronomic delights inside. Within a few meters, you can buy fruit and vegetables, fresh bread, meat and fish, typical products of Ligurian cuisine, clothing, footwear, costume jewelry, and much more. You can also buy local cheeses, pasta, focaccia, jars of pesto, oil, basil, and anchovies from the Ligurian Sea.

Read also: Things to do in Genoa

Campo de ‘Fiori is sadly known to most for the executions that took place here in the XVII century. The philosopher Giordano Bruno, whose statue dominates the crowded square, was the illustrious victim. But the beautiful name of the square is because, until 1400, there was a lawn with some vegetable gardens, while the first shops stood around the square. Even now, the adjacent streets bear the names of the craftsmen who worked there, such as Via dei Cappellari (Hat makers Street) or Via dei Giubbonari (Jackets Street). It is the focal point of the Roman nightlife at night, while during the day, it is home to a market that contains the most traditional Roman essence. This splendid square of the capital has been home to one of the most famous historical and folkloristic markets in the world since 1869. There is no better choice than a stroll through the market, looking for local cheeses, fresh vegetables, rice, dried fruit, and legumes. Here among colorful stalls and characteristic scents, it is possible to buy typical Roman cuisine products, such as broad beans, pecorino cheese, and the famous artichokes. Flower stalls also abound.

Read also: Things to do in Rome

Porta Palazzo is the largest open-air market in Europe (and “Porta Pila” is another nickname by which Turinese people call it). Located in the large Piazza della Repubblica (Republic Square), Porta Palazzo is a place to shop and a great melting pot of cultures and traditions that come here from all over the world. The market acts as a hinge between Turin’s heart and the more peripheral part, in a cheerful mix of scents and cultures of a multi-ethnic city, which unites Italians with Africans, South Americans, and Chinese. There are two large canopies for food stalls and various iron structures for the sale of clothes, jewels, and various objects in the square. The symbol of Porta Palazzo Market is the Clock Pavilion, an elegant nineteenth-century-inspired wrought iron structure built between 1915 and 1916: its roof in recent years is illuminated by signs with the words “love the differences” in many different languages, to underline the opening of the market to every people in the world. There is also a building in the square designed by Massimiliano Fuksas (hence the name Palafuksas), which houses numerous shops and restaurants. At the same time, in the basement, there is an ancient “icebox” used in the past for the preservation of food. Every Saturday, there is also the flea and antiques market, called the “Balon,” very close to Porta Palazzo.

Read: Things to do in Turin

The Loggia of the Mercato Nuovo (New Market) is home to one of the liveliest Florentine historical markets, right in the city’s heart. Built-in the mid-16th century, the loggia first welcomed gold and silk traders, then straw hat sellers, and today, it houses mostly souvenir and leather goods stalls. Tourists who want to take home a souvenir of Florence can make their purchases here, not without first donating a coin to the bronze boar, at the Loggia entrance, as a wish for good luck. The bronze boar statue is positioned right on one side of the portico, completing a small fountain. It was 1640 when Pietro Tacca made the bronze boar, reproducing an ancient Greek statue kept in the Uffizi Museum. The locals immediately appreciated the animal so much that they attributed it to the role of good luck. Even today, hundreds of people caress his face day after day, placing a coin on his tongue and letting it fall into the basin of the fountain for good luck. Many stalls of leather and leather bags, belts, and wallets, together with silk dresses and scarves, hats, and other items much loved by visitors, especially foreigners.

Read also: Things to do in Florence

In Naples, through the local markets, it is possible to know the city in its truest authenticity. Among these, there is certainly to see, at least once in a lifetime, that one of Porta Nolana: here you can buy clothing, various items, fresh fruit and vegetables and you can try the delicious Neapolitan street food.

San Gregorio Armeno, on the other hand, is the street where since the XVII century, there have been the workshops of the artisans who make cribs. It is not a traditional market, but its fame makes it one of Naples’ most visited places. Here, throughout the year, traditional and more original figurines are exhibited, with the appearance of historical, political, and current figures. It is possible to enter one of these shops to observe artisans at work and find out how these small works of art of the most classic Neapolitan tradition are made.

In the XVII century, the Neapolitan crib became popular, celebrating not only the Nativity but also daily life and the humblest professions. Alongside the sacred images, figurines of merchants, shepherds, commoners, and children appeared, made with care and a wealth of surprising details. Today, in Naples, before setting up the nativity scene, you can walk along San Gregorio Armeno Street in search of new elements, whether it be shepherds, sheep, oxen, donkeys, or water mills: the street is colorful and evocative, illuminated and literally submerged by statuettes of all shapes and sizes. But don’t think that via Gregorio Armeno Street only gives a show close to Christmas: the shops are also open in the other months of the year, and although walking among the cribs in summer may seem a bit strange, it is an excellent strategy to avoid the crowd of the Christmas holidays and fully appreciate the beauty of the artifacts.

Read also: Things to do in Naples

Modena boasts a quaint and colorful market similar to Barcelona’s Boqueria or Madrid’s Mercado de San Miguel. This is the Albinelli Market, which is a beautiful structure of iron and glasshouses stalls full of food and wine products and an incessant bustle of people. Declared a monument of national historical interest in Italy in 1997. The Albinelli market in Modena was inaugurated in 1931: the large covered market would have ensured greater convenience for both sellers and buyers, protecting people from bad weather. The market had to be functional and welcoming and elegant: the effect is perfectly achieved by the wrought iron vaults, the mighty columns, and the refined central fountain representing a girl with a basket of flowers. The Albinelli Market attracts around 30,000 visitors every week: here, you can also buy the region’s culinary tradition’s delicacies.

Read also: Things to do in Modena 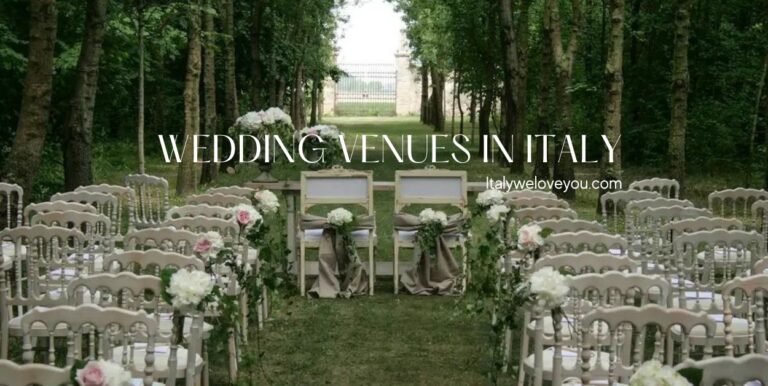 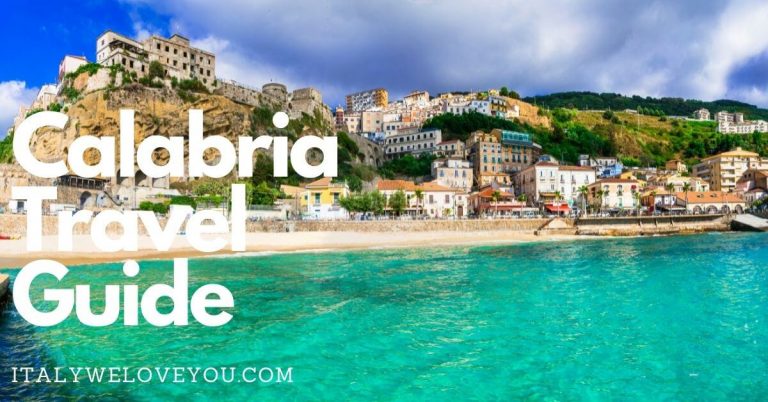 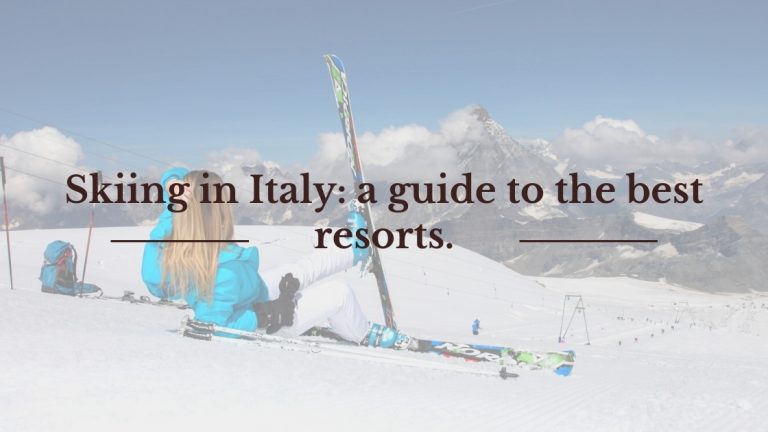