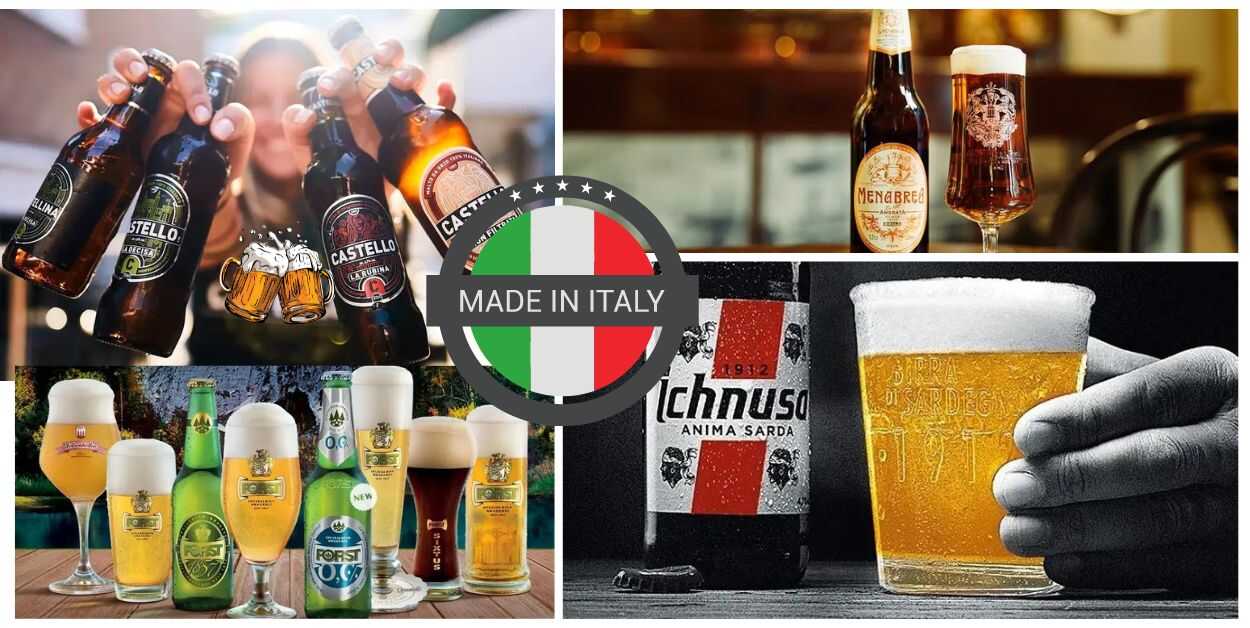 Beer is one of the oldest and most consumed alcoholic beverages in the world, and the third most popular beverage after water and tea. Beer is produced from cereals, mainly from malted barley, but also from wheat, corn, rice and hops, which adds that bitter note and acts as a natural preservative and stabilizer.

In recent years, exports of Italian beers have reached an all-time high, in constant and almost uninterrupted growth since 2015. The Countries that import the most Italian beer are: United Kingdom, Netherlands, France, Romania, Germany, Malta and USA.

Italian beer brands proudly emphasize their origin, not only in the name (many of them recall the surnames of their historical founders, to underline the ancient origin of the product), but also in the origin of the raw materials. “Made in Italy” has great appeal all over the world: it is synonymous with quality, taste, tradition. If all or almost all the historical brands born in Italy continue to produce in Italian factories, the question of ownership of the companies is different: many Italian brands have in fact been acquired over the years by foreign multinationals.

Let’s now see which are the best-known Italian beers abroad. Peroni is the Italian beer par excellence. Born in 1846, it tells the story and the Italian tradition through its quality devoted to sustainability and innovation. It is produced in the 3 factories in Rome, Bari and Padua. Its secret is contained in carefully selected raw materials, such as Italian malt and in the meticulousness of the production processes. Peroni “lager” is undoubtedly the best-selling and most popular beer of this brand, available in different formats and recently renewed in look. The assortment is very wide and includes several “special” beers: the four variants of Peroni Gran Riserva, the Peroni raw (unpasteurized), the Peroni Chill with lemon, the Peroncino (a beer with a light body, but with a great aromatic complexity). Participated by the Danone Group since 1988, in 2003 it was acquired by SABMiller (United Kingdom-South Africa). In 2016 SABMiller, at the time the second largest producer in the world, was acquired by Anheuser-Busch-InBev (Belgium-USA) which, to avoid competition problems with antitrust, it sells Peroni to the Japanese group Asahi.

Peroni Nastro Azzurro is a premium Italian beer produced since the sixties by the Peroni brewery in Rome. It owes its name to a tribute to the Italian transatlantic Rex, which in 1933 managed to win the Nastro Azzurro award. One of its best ingredients is a variety of corn produced exclusively in Italian agricultural areas which gives this beer a decidedly dry and, at the same time, fragrant flavor with an intense hop aroma. The alcohol content is 5.1% vol. To date, Peroni Nastro Azzurro is the best-selling Italian beer in the world, exported to all continents and to over 70 Countries. The label has undergone a recent restyling, essentially aimed at emphasizing the Italian character of the product and underlining its belonging to the great Peroni beer family. The red “Peroni” logo, in fact, stands out above the writing “Nastro Azzurro”. Like the company Peroni, aldo this brand has changed hands over the years from Danone, SABMiller, AB-InBev finally to Asahi. Birra Moretti is one of the most famous Italian beer brands abroad. It was born in 1859 in Udine, in Friuli Venezia Giulia, and soon became a symbol not only of the city. It was founded by Luigi Moretti, a leading exponent of a family of wealthy merchants, very active in the wholesale sale of grains, wine, spirits and food. Birra Moretti has undertaken an ambitious project dedicated to the production of regional Italian beers (Sicilian, Piedmont, Tuscany, Pugliese beer). In 1996 Birra Moretti was bought by Heineken Italia, itself part of the Dutch Heineken group. Consequently, Birra Moretti is no longer, at least officially, an Italian beer. However, its great history, tradition, its unique and taste are appreciated in the world. The production of Moretti beers (Moretti, Baffo d’oro, La Rossa, Doppio Malto, Zero, Gran Cru) is now divided and distributed in the four plants that Heineken has in Italy: Assemini, Comun Nuovo, Massafra and Pollein. The most famous symbol of this beer is the man with the mustache shown on the label.

Poretti Brewery was founded by Angelo Poretti in 1876 in Induno Olona. In 1973 it became part of the Danish Carlsberg group, which from 1982 began to acquire progressive company shares. Until, in 2002, it obtained the entire property. In 2007 the historic Poretti Brewery became the subject of a gigantic marketing operation aimed at relaunching the brand. The new name is the one by which we know it today: Angelo Poretti Brewery. Beer enthusiasts can also visit the museum set up near the production plant: they will be accompanied to discover the history of the brewery founded by Angelo Poretti, being able to see how beers are born. A visit that starts from the Cooking Room, the beating heart of the production and of the entire Brewery, to continue in the park where Villa Magnani is located, a splendid liberty residence of Angelo Magnani, grandson of the founder. During the visit, of course, you also have the opportunity to taste the beers produced here in all their assortment, up to the Brewery shop, the last stop on the tour.

Menabrea is an ancient Italian brand of beer that is produced by the company of the same name whose historic headquarters and brewery are located in Biella, Piedmont. Founded in Biella in 1846, the company assumed its current name only in 1872, when it was bought by Giuseppe Menabrea, who on his death bequeathed it to the genres Augusto Antoniotti and Emilio Thedy. The Thedy family will control the brand until 1991, when the company will be acquired by the Forst group. Under this brand – owned since the early nineties by the Forst group, until then owned by the Thedy family – around 110,000 hectoliters of beer are produced annually. Part of these quantities are intended for export. Menabrea, in fact, is sold in twenty-five Countries. In over a century and a half of life, Menabrea beer has won prestigious awards, thanks to the undisputed quality of its product; furthermore, annexed to the factory there is the beer museum divided into a series of historical relics that show the different systems adopted over time for the production of this popular drink. Castello Spa – Friulian Beer Factory – was founded in 1997 in San Giorgio di Nogaro, in the province of Udine. And it collects an important legacy: that of Birra Moretti, of which it took over the production complex. It immediately established itself for the high quality and authenticity of its beers. In addition to owning one of the most modern Italian factories (built in 1993), it can make use of a local brewing tradition refined by over a century of activity as well as management and control techniques bequeathed by multinationals (Labatt, Interbrew, Heineken) who took over as head of the former Friulian company. Castello Bionda beer is a low-fermentation premium beer, with a light golden color, an intense hop flavor and a very fine perlage. Pouring it, Castello Bionda beer develops a fine and compact foam, through which an intense hoppy note and decisive vegetable aromas are released. On the palate it reveals a harmonious and well-balanced taste, because it balances the sweet sensations of the malt and the amarotic of the hops (which becomes the fairly persistent final note). Founded in 1857 in Foresta, a hamlet of Lagundo, in the province of Bolzano, by two Merano brewers; it was taken over six years later by Josef Fuchs, the progenitor of the family who still heads the company today. The production plant is still based in Lagundo. One of the secrets of the quality of Forst beers is the source of Mount San Giuseppe from which the brewery draws particularly pure water. If the raw material is excellent, the production process is no less. The Fuchs family, which still owns the Forst brand, maintains a strict quality policy based on freshness: as much as 50% of the beer is distributed in kegs and is not pasteurized. Among its most famous beers we have the Forst Sixtus, a dark brown doppelbock, very fragrant and with a precise caramel and malt taste. The name of this double malt beer, created by Forst in 1901, is a tribute to San Sisto, Sixtus in German. It is a classic example of beer obtained with low fermentation: the foam is compact and persistent and the alcohol content is respectable (6.5%). For over 100 years, it has been telling the story of Sardinia, of which Ichnusa is the ancient name among the best known and most popular Italian beers. The brand was founded in Cagliari in 1912, and the plant moved to Assemini starting in 1963. One of the new plant’s first innovations was installing cylindrical and vertical fermentation tanks. They were the first in Italy. In 1986 it was acquired 100% by Heineken (Holland), but the beer continues to be produced exclusively in the Assemini plant. Ichnusa is a full-bodied beer made from pure barley malt, with a slight bitter note in the finish. The ingredients used are light barley malt and caramel barley malt, a mix that makes this unfiltered beer rich in herbaceous and exotic scents typical of the Sardinian territory. The alcohol content is 4.7%. On the occasion of the centenary, Ichnusa Cruda was conceived and produced, an unpasteurized light beer with an intense flavor. Among the prizes won internationally, the Superior Taste Award conferred by the International Taste & Quality Institute of Brussels is worthy of mention.

Company founded in the eighties, over the years it has changed many owners when in 1999 it will be bought back and converted into a family business by the Tarricone family. The production plant is located in Balvano, in the province of Potenza. Birra Morena is placed on the market as a relaunch point between the industrial world of the sector and the local breweries, to create an aggregation of independent distribution. The art of producing fermented products and managing yeasts is in the DNA of the Tarricone family: in fact, as early as the early 1900s, the progenitor Giuseppe Tarricone had several vineyards and produced excellent wine. Birra Morena, an industrial reality on the national market, has managed to establish itself as an all-Italian brewing center, antagonist of the most famous multinationals. Over the years, Morena beers have been produced in several variants, also winning different prizes, including the 2018 Gold Medal at the Craft Competition International Awards (USA) and the three Gold Medals in the Italian beer category collected in 2017, 2018 and 2019 at the WBA in London. In 2017 Morena Celtica Sweet Stout was awarded as the best sweet stout internationally at the WBA in London.