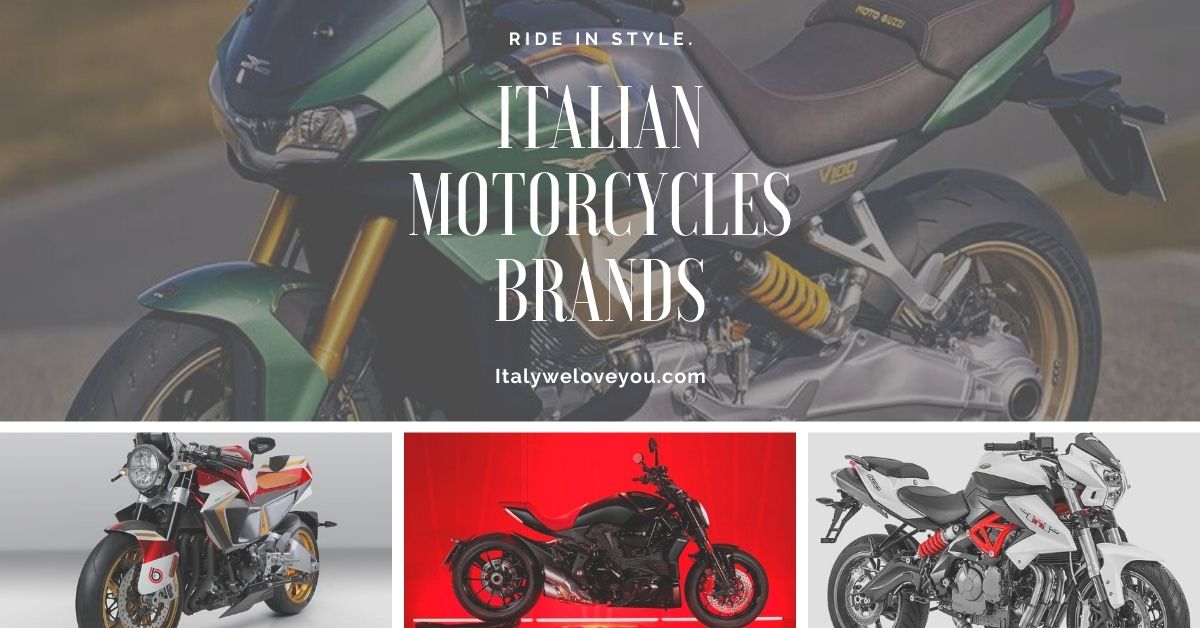 There are numerous Italian motorcycle manufacturers: they range from the most popular motorcycle brands to the less known but appreciated for the production of handcrafted motorcycles. Some iconic brands have entered the collective imagination of motorcyclists around the world.

The oldest Italian car manufacturer is Benelli, which has been producing motorcycles since 1911, while the most famous is certainly Ducati. MV Agusta, on the other hand, is the Italian motorcycle manufacturer that, together with Ducati, is known all over the world for marketing some of the fastest motorcycles available on the market.

Italian motorcycles were born from family businesses that during the Second World War dealt with mechanical parts for the war industry. Piaggio, for example, built trains and wagons, Benelli produced pistols and Laverda built tractors and agricultural machinery. The post-war boom and the need to have cheap means of transport on a national scale led to many companies converting into two-wheeled factories such as bicycles and motorcycles. But it was in the 70s and 80s of the last century that the Italian motorcycle industry aroused worldwide interest. In those years the motorcycle quickly transformed from a utilitarian vehicle to a passion: scooters took the place of light motorcycles, effectively making them disappear. The motorcycles have grown in displacement, in equipment, in performance, in technique. But Italian excellence is not only on an industrial level with motorcycle brands such as Ducati or MV Agusta; Italian excellence is also seen in the crafts sector. Among the various Italian handcrafted motorcycle manufacturers, we point out, for example, Moto Di Ferro, Officine Rossopuro, FMW Motorcycles, and Officine Metalliche.

The Italian motorcycle brands had a period of maximum splendor which was followed by a downward trend. The market in recent decades has become increasingly difficult by favoring large manufacturers who have developed quality products at competitive prices. It is no coincidence that some motorcycle manufacturers have been purchased by Chinese companies. Some Italian motorcycle brands have in fact undergone various evolutions and changes of ownership. For example, Moto Guzzi today is part of the Piaggio Group with an acquisition that dates back to 2004. In the Piaggio Group, we find the Italian motorcycle brands Aprilia, Gilera but also Vespa, Derbi, and Scarabeo. Brands like Aermacchi, Laverda, Benelli, Gilera almost disappeared, someone almost immediately, some other resisting until the 90s, focusing on small-displacement motorcycles. 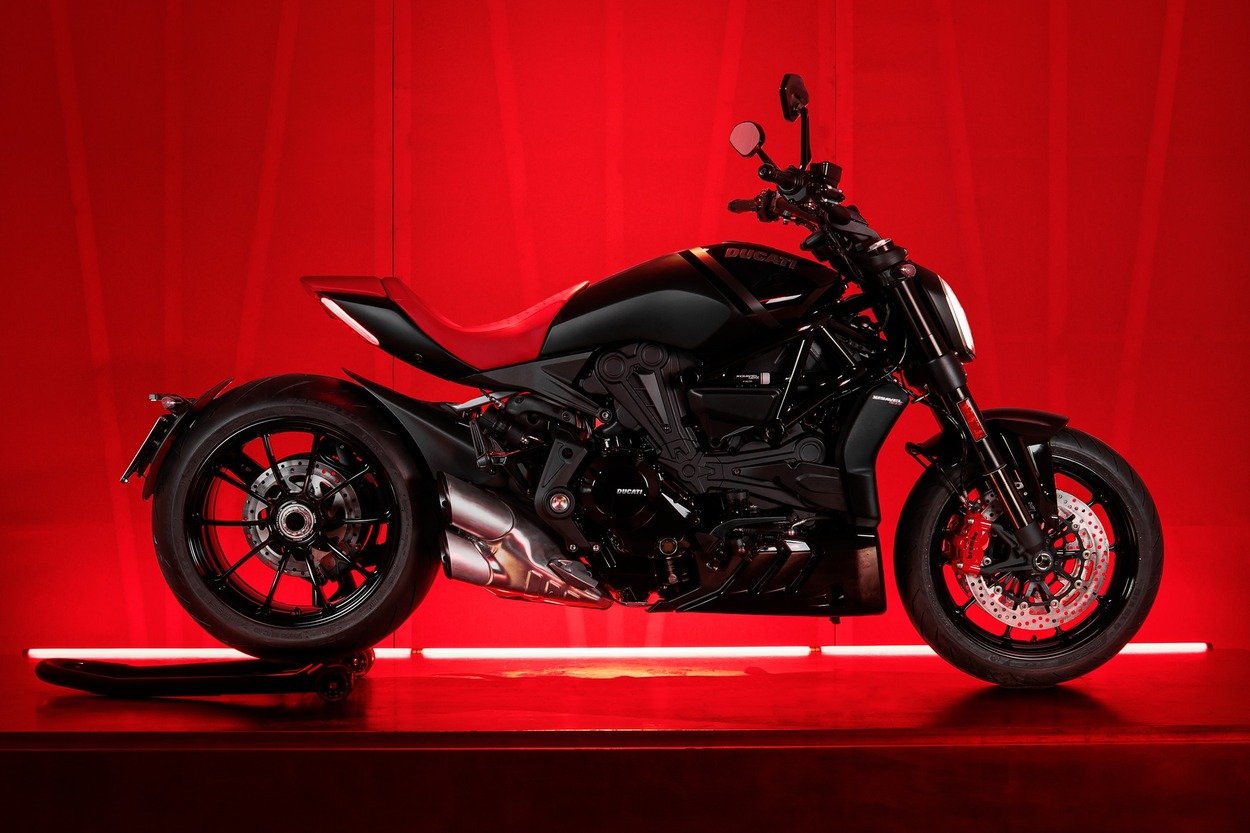 It is undoubtedly the best-known Italian motorcycle brand. Its historical headquarters are in Borgo Panigale, a district of Bologna. Ducati begins its motorcycle production in 1926. Since 2012 Ducati has been controlled by Automobili Lamborghini S.p.A. It is defined as the ‘Ferrari’ of the motorcycle sector also for its successes in the competitive field. Its high-performance models are appreciated all over the world. The design is of pure Italian imprint. Today, Ducati’s range includes over 30 motorcycle models including Scrambler, Hypermotard, Multistrada, Supersport, and the Panigale, Monster, and Diavel ranges. 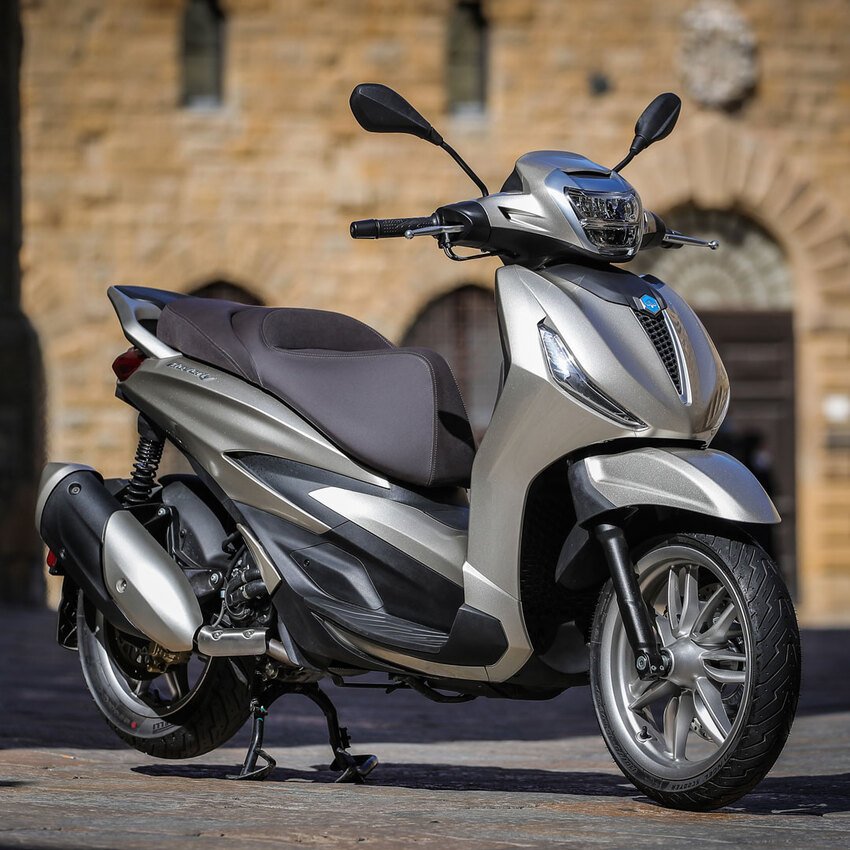 Piaggio is the motorcycle manufacturer of the legendary Vespa, and it is a status symbol for several generations of Italians. In 1884 Rinaldo Piaggio started the production of naval furniture and then, in 1946, began the production of the most famous model in the world, the Vespa Scooter, designed by Eng. D’Ascanio. The production includes other successes such as the Ape three-wheeler, Ciao, Boxer, Bravo, Si, and Zip. Today Piaggio also controls the Gilera, Derbi, and Aprilia brands and is well established in the scooter market. It is a historic brand of Italian motorcycles and its history dates back to the years of the First World War. As a family business it was founded in 1921, but subsequently, from a corporate point of view, it went through many problems and was also acquired by the Italian State in 1966. The first bike is the GP – Guzzi-Parodi, then replaced with the Moto Guzzi brand. A very successful model was the Guzzino 65 and later the Falcone and other models. The Moto Guzzi icon is the V-twin, even if the economic crisis then sets in, and today it has become part of the Piaggio Group. Now its new models still represent the best in motorcycling. 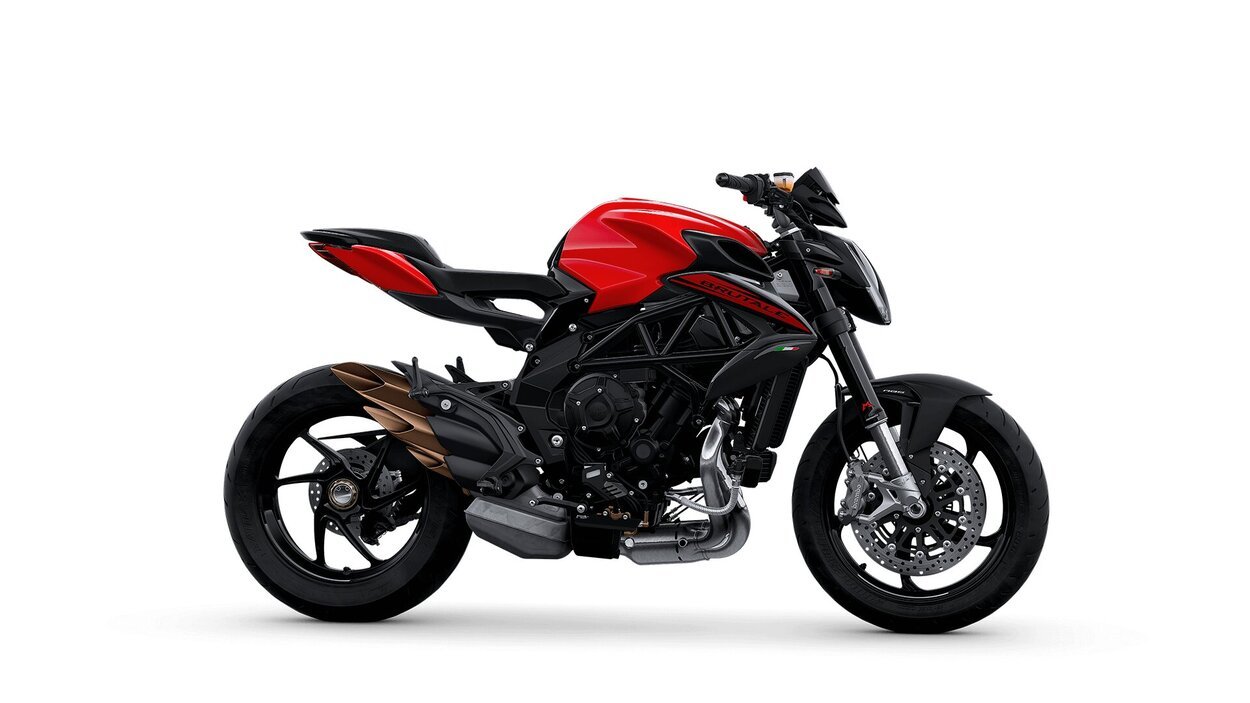 Its history is relatively recent: it was born in 1945, starting to produce road and racing motorcycles. In the early 1960s, the production superbike with a four-cylinder engine arrived and in 1992 it became part of the Cagiva group which, after a very brief handover to the Harley Davidson group, in 2008, regained the brand again in 2010. It is known as the most successful Italian, or rather European, motorcycle manufacturer of every era, surpassing even Ducati. The current range includes several interesting models, among these we remember the MV Agusta Brutale, the F4, F3 and the Dragster. Great Italian motorcycle company, it started in 1945 by producing bicycles. In the 1960s it built the first mopeds, the Colibrì and Daniela, and then, two years later, proposed the Scarabeo model. However, it was the Eighties that saw the first motorbikes with a sporting and enduro setting, a sport that is practiced on dirt roads and mule tracks and then it is engaged in sports competitions. In 1993 the Scarabeo 50 scooter was born, which will grow to reach 500cc. Today Aprilia belongs to the Piaggio Group. 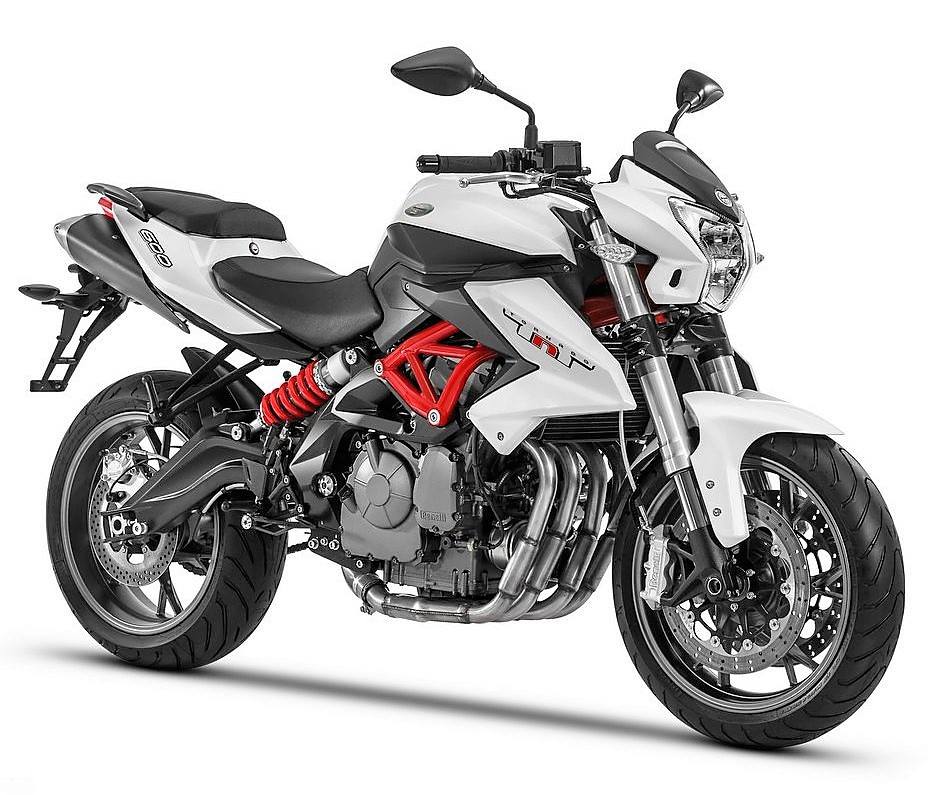 It is another famous brand that was born in 1911 by the will of the widow Benelli. From a repair shop opened in Pesaro, in 1920 here is the first 75cc prototype, which will reach 98cc, starting series production. Benelli was closely linked to competitions, both national and world-wide. Unfortunately, in 1988 Benelli closed the factory, and the two attempts, in 1989 and 1995 to revive the brand, did not give the desired results. In 2005 the final closure took place. Today it belongs to a Chinese group. 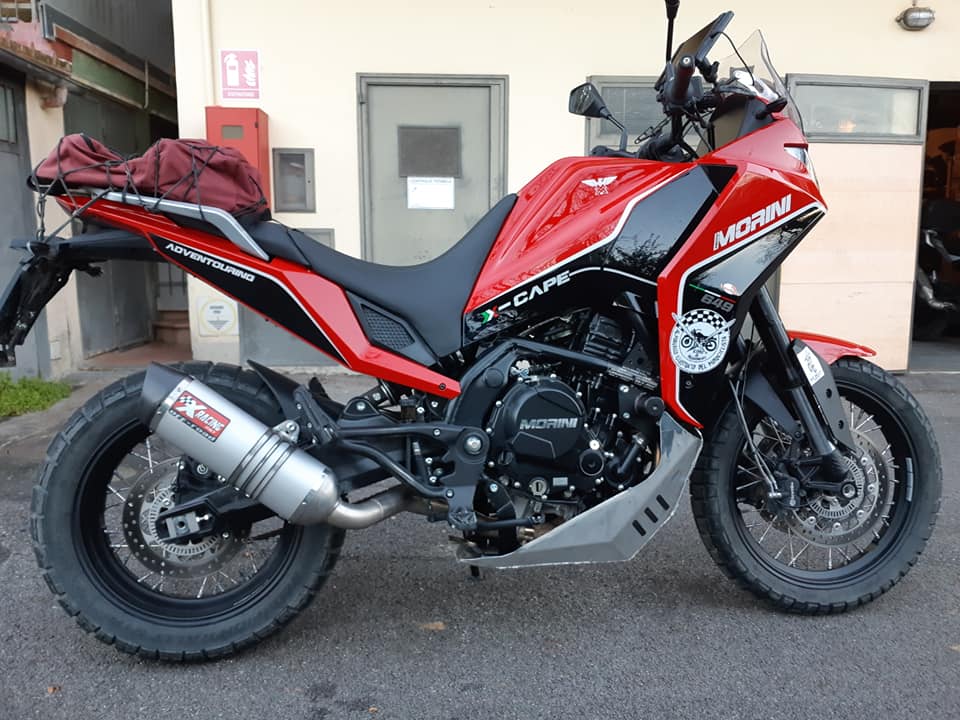 It is an Italian motorcycle manufacturer founded in 1937 by Alfonso Morini, a pilot and designer who established his starting point in Bologna for an initial production that included engines and three-wheelers. A brand that after various events is back on the road with new models that have all the numbers to revive the glories of the past, when the Morini 350cc was a must for many young motorcyclists on Italian roads. Among its iconic models, we remember the Corsaro (in several variants), flanked by the Scrambler and the Granpasso. In 2018 Moto Morini became part of the Chinese Zhongeng Vehicle Group. 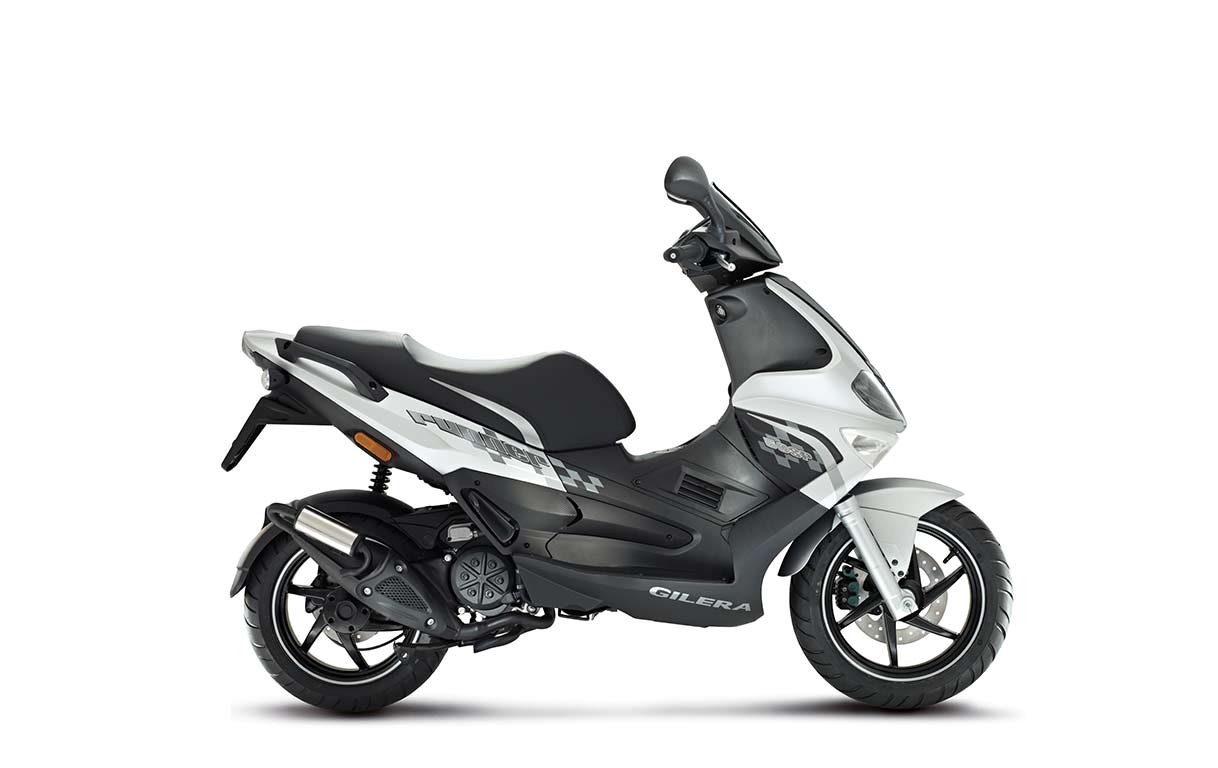 It is the oldest Italian motorcycle manufacturer still in business and one of the oldest Italian motorcycle brands. It was founded in 1909 in Milan and is now owned by the Piaggio group. The first motorcycle was the VT 317. After the war, new models were born, such as the Otto Bulloni and the Saturno. In the sixties here is the Giubileo and the twin-cylinder 300. In 1993 the Arcore plant closed and moved to Pontedera, in the province of Pisa, with an almost exclusive production of scooters. Today it produces a wide range of motorcycle models from 50cc up to 500cc. 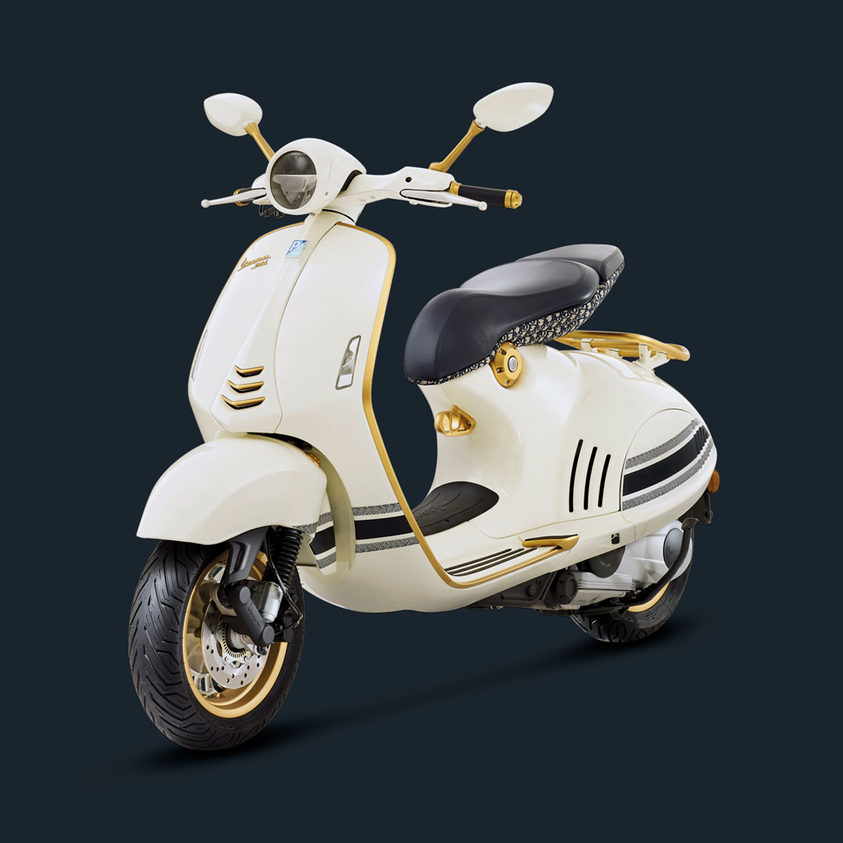 Vespa was launched in 1946 with a displacement of 98cc and with characteristics that have not changed over time. It is, without a doubt, one of the most famous products ever made, as well as a representative icon of Italian design in the world. It is such an iconic object that it is exhibited at the “MoMa” in New York and at the “Triennale Design Museum” in Milan. In 1996 a new generation of Vespa was born, with engines equipped with automatic transmission. The PX with two-stroke engine is back, heir to the one presented in 1977. Today the Vespa is part of the Piaggio group. Born as a Piaggio model, its success is such that it became a brand in its own right in 2004. 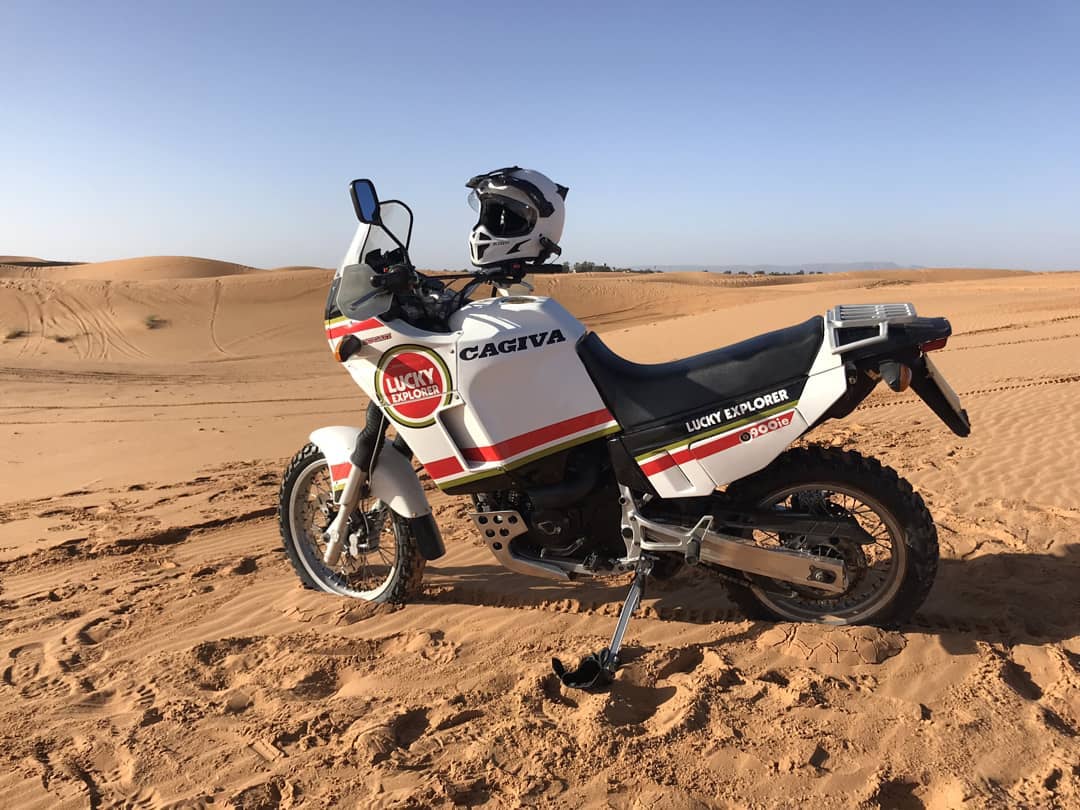 Cagiva was founded in Varese in 1950 by two brothers; initially it was a company dedicated to the molding of small metal parts. He has entered the racing world since 1978. With the Suzuki 500 at the French GP in 1978, Cagiva fully enters the history of motorcycles. It will take over the plant where the Aermacchi and then the AMF were produced. In the 1980s some of the most famous models were produced, such as the 916 and the Monster. Among the sports motorcycles we remember the Cagiva Mito SP 525 2009. It was known on the international market as the home of the little elephant, due to its presence in the trademark. 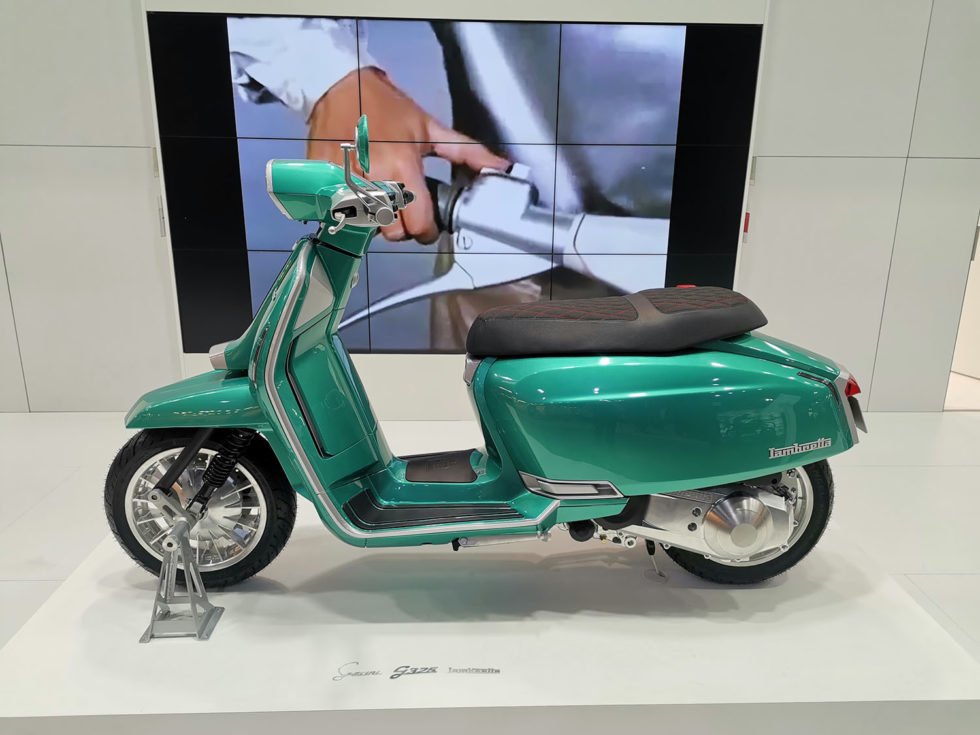 The Lambretta is a symbol of Italian engineering produced by Innocenti in Milan, a mechanical company founded in 1933. In 1947 the first Lambretta model was produced and immediately enjoyed enormous success among the Italian population. The Lambretta’s goal was to compete with the rival Vespa produced by Piaggio. In 1972 the Indian government acquired the rights to the Lambretta, in order to guarantee their Country a small means of transport that was within everyone’s reach. Production by SIL (Scooters of India Limited) remained active until 1997, while today the Lambretta brand is part of the Austrian KSR group, which acquired it in 2017. 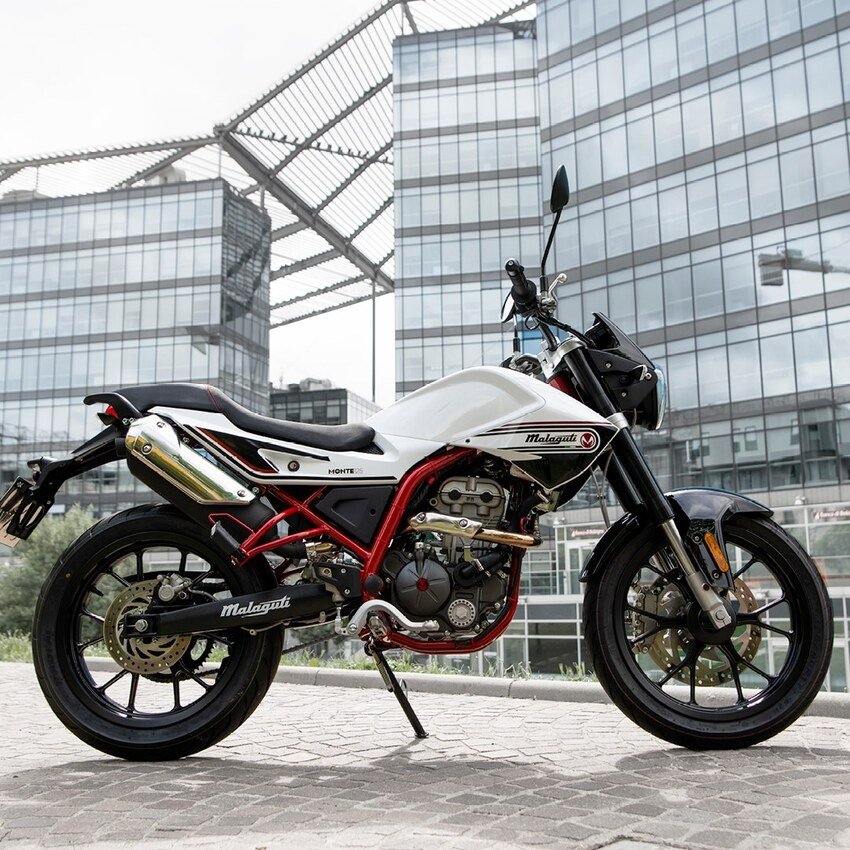 The birth of Malaguti dates back to 1930 when the founder Antonino Malaguti decided to open his own workshop for the repair and resale of bicycles in Bologna. Malaguti has always been synonymous with sportiness, a feature present on all models since the beginning of their production after World War II. The first mopeds were the Express and Express Sport of the late 1950s, which actually anticipated the production of the 1960s mainly focused on 50cc mopeds. Today Malaguti produces a wide range of scooter models from 50cc to 500cc, 50cc motorcycles in enduro, supermoto, and naked versions and models for children, including a quad. 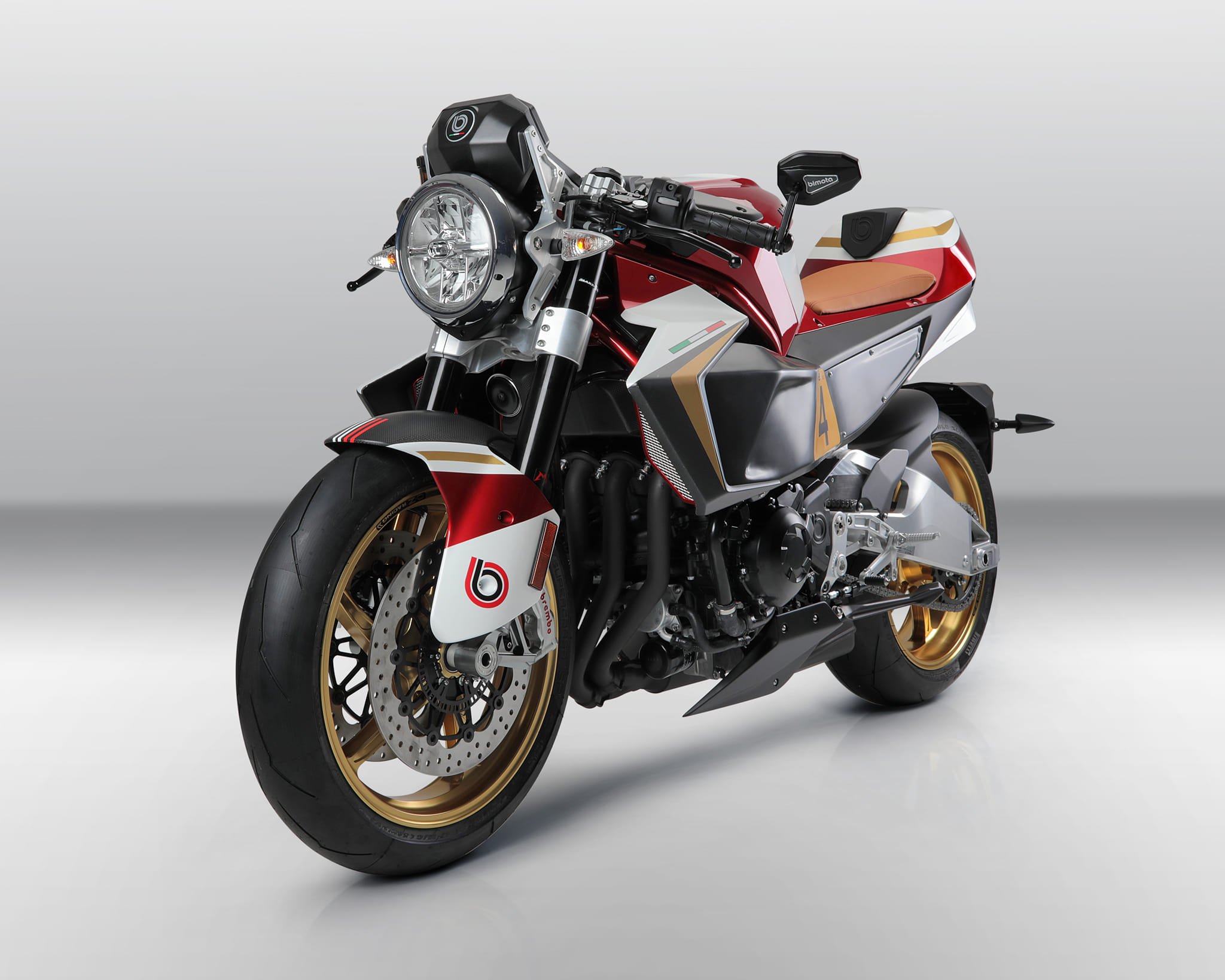 Bimota was born in 1966 in Rimini. In the 90s it produced street motorcycles with Ducati and Yamaha engines (then definitively replaced with Suzuki ones). The motorcycles of this Italian company stood out for their top-level build quality and for some innovative solutions that made them unique in the super sports motorcycle segment. Today the range has 11 models, three of which are produced only on request. The production maintains the Supersport BB3 (used in 2015 with the Trofeo version in road racing, including the TT and Northwest 200), the Tesi 3D, the naked DB9, and the DB8 Superbike with Ducati engine. Italjet is an Italian motorcycle company founded in 1960 in Bologna. After suspending motorcycle production at the beginning of the 2000s, limiting itself to the production of electric bicycles and pedal-assisted bicycles, production resumed in November 2020. We have reached the current scooters and small mopeds from the first old-style models. medium displacement for the right synthesis of design and performance. In November 2020 the production of motorcycles restarts with the new generation of Dragster, a totally new model with 125 and 200cc engine inspired by the famous 90s scooter.