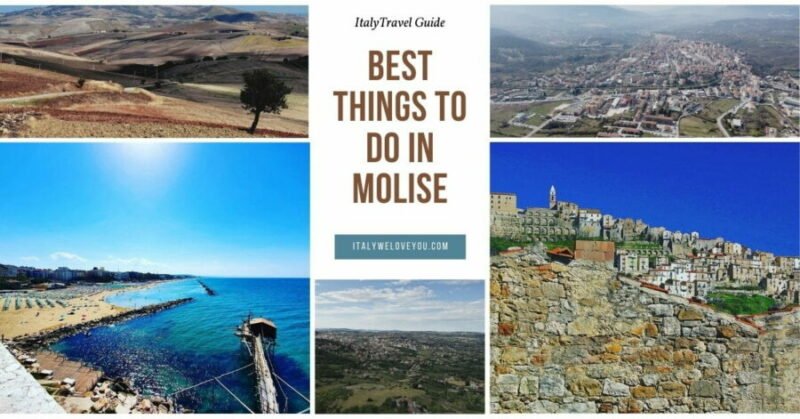 Molise is a region rich in history and natural beauty, with traditions of ancient origin. Its territory is equally divided between mountains and hills: crossed entirely by the Apennine mountains, the terrain then slopes down, with wide hills, towards the plain up to the sea.

Molise is a land still uncontaminated and inhabited by a hospitable and welcoming people. The territorial variety allows the region to attract tourists in all seasons: in winter to ski and in summer to relax on the white beaches, also ideal for water sports enthusiasts and sailors. The middle seasons, on the other hand, are perfect for cultural and naturalistic tourism.

What is the best time to visit Molise? If the territory attracts tourists in all seasons, the semi-continental climate could discourage some with its generally cold and snowy winters and hot and sultry summers. If you do not like skiing in winter and you do not want to stay on beaches in summer, the most recommended periods to visit the region are spring and autumn: the mid-seasons are ideal if you want to discover the area on foot or by bicycle, following the paths of the pilgrims or the ancient ways that cross the region.

Things to do in Molise:

The city of Campobasso is the capital of Molise which rises 700 meters above sea level, between the Biferno and Fortore rivers. Its name is not linked to the geographical position, but to the foundation of the new city, granted in the “lower field” by Gioacchino Murat in 1814.

The city, whose historic center has an original fan-shaped structure, with stairways and alleys that revolve around the Monforte Castle, has Lombard origins and should be visited on foot, to observe the many Romanesque palaces and churches that meet along the  Rimembranze avenue, such as the church of Santa Maria delle Grazie, the church of San Giorgio and that of San Bartolomeo. Up to the thirteenth-century church of San Leonardo and the neoclassical Cathedral of the Holy Trinity.

Extremely livable and with large green spaces, Campobasso was designed in the nineteenth century according to the ideal of the garden city, well represented by the elegant and elegant buildings of the historic center.

Isernia, on the other hand, is the second most important city in the region and has a very ancient history, evidenced by archaeological sites such as La Pineta, nominated in 2006 in the UNESCO World Heritage List, or the Necropolis of the Quadrella. There are also traces of Roman domination: on what used to be the Forum now stands the current Piazza del Mercato (Market square) and where today there is the cathedral of San Pietro there was the temple of Jupiter. The Roman aqueduct, excavated in the travertine rocks in the subsoil of the city, is still functional today.

The symbol of the city is the Fontana Fraterna, a fountain made up of blocks of local stone and witness of the different historical periods.

The most interesting part of Molise, however, is located outside the two main cities, both for the archaeological finds and the ancient castles and for nature and the seaside towns.

In the woods near the castle of Pescolanciano, for example, you can admire the ruins of fortifications from the Samnite era, while at the foot of the Matese mountain you can see the remains of the ancient Saepinum, with its private buildings, the amphitheater, the basilica. .

Also worth visiting is the Capua castle in Gambatesa, a medieval manor transformed in the Renaissance into an elegant residence, inside which you can admire sixteenth-century frescoes.

The town of Guglionesi has an almost intact historic center, rich in medieval monuments. Here you can visit the magnificent church of Santa Maria Maggiore, which houses superb works of art, and the Crypt of Sant’Adamo, with majestic frescoed arches. The Romanesque church of San Nicola di Bari is also worth a visit. Guglionesi enjoys a happy position between the cultivated hills of the hinterland and the coast, to the point that the inhabitants call their walk on the belvedere “the waterfront”, due to the landscape of the sea. Croatian traditions are still alive in the area of San Felice del Molise, in memory of the colony of Slavs who once resided here.

In the area, full of olive trees, three small urban centers retain the double denomination in Slavic: Acquaviva Collecroce (Kruc), with the valuable baroque church of Santa Maria Ester; the locality of Dalmatian origin San Felice del Molise (Filic), with the church of Santa Maria di Constantinopoli; and Montemitro (Mundimitar), a town where the mother tongue of the community from Croatia is mostly preserved.

Bagnoli del Trigno is a romantic and suggestive town that attracts many tourists, especially during its events. It is located about 35 kilometers from Campobasso and one of its most important events is “Frammenti D’Antico” which is held every year on August 18th. It is a medieval fair with costume parades, typical foods, and the obligation to change euros into ducats to buy anything. Along the Trigno Valley, the Sanctuary of the Madonna del Canneto is also worth a visit, immersed in an oasis of greenery and almost surreal silence.

Castel San Vincenzo is the ideal destination for mountain and archeology lovers. The town is located in the province of Isernia, within the National Park of Abruzzo, Lazio, and Molise. Among the monuments, the Abbey of San Vincenzo al Volturno stands out, one of the most important early medieval archaeological sites in Europe. The town overlooks a beautiful artificial lake, created in the late 1950s for hydroelectric purposes.

Civitacampomarano is a town that revolves around the Angevin castle, among the most important and best-preserved in the region, with a cylindrical tower and a graceful Renaissance loggia. Moving to Vallemonterosso there is a well-equipped picnic area, a base for excursions in the woods, and towards the Celano-Foggia sheep track, another of the great transhumance routes from Abruzzo to Puglia.

After Lucito, surrounded by olive groves, and the bridge over the Biferno, you go up to Petrella Tifernina. Of interest, here, in addition to the pleasant historic center, is the church of San Giorgio Martire, with the cusp of the bell tower covered with majolica. In Petrella, Santa Maria della Strada is also worth a visit: an ecclesiastical building erected in Romanesque style on a small hill, on top of which there is a high bell tower. North of the small center of Montagano, near the Biferno river, there is the historic church of Santa Maria in Faifoli, with a magnificent Gothic portal.

Among the many seaside towns scattered on the Adriatic coast, Termoli stands out, from where you can embark to reach the pristine Tremiti Islands. Medieval town perched on a promontory is surrounded by beaches with crystal clear water dotted with trabocchi, typical of this stretch of coast between Abruzzo and Molise. Trabocchi are platforms built in the open sea, of nineteenth-century tradition, connected to the ground by a walkway and built to be able to fish avoiding the danger of going out to sea.

The route to the Tremiti islands has as its reference point the lighthouse of Vasto or the old town of Termoli. You can also reach the white coasts of the island of San Domino, the largest of the archipelago. Already a mile away you can see the entire southern profile of San Domino. Here the bay of Cala Spido, difficult to access from the ground, is an oasis of vegetation that surrounds a mirror of blue water sheltered from the mistral winds. The seabed is just six meters deep but then sinks down to 70 meters. In fact, the Tremiti islands are not islands where is possible to arrive easily. Cala Matana with its transparent waters and sandy bottom, is one of the favorite coves for sailors. In the sea channel among the tip of the lighthouse of San Nicola, the islet of Cretaccio and the last spur of rock that marks the north-eastern limit of San Domino, you come across Cala delle Arene, a sort of submerged museum that sometimes reveals some evidence of ancient ships that ran aground there to escape storms.

Molise is also a destination for mountain holidays in both winter and summer. Its landscapes are characterized by unspoiled nature with huge valleys that create postcard views. The Molisano Apennines are composed of three important mountain formations: Mainarde, Matese and Upper Molise. The highest peak in Molise is Monte Meta, 2,242 meters, located on the border among Lazio, Abruzzo and Molise. The Matese Massif is the oldest in Molise with peaks over 2,000 meters and breathtaking nature, with rivers, streams, oaks and firs. The main mountain resorts are Campitello Matese and Capracotta which boast cutting-edge ski facilities and a varied offer for winter sports. In particular Campitello Matese is located on Monte Miletto and represents one of the most important and renowned winter tourist destinations in Molise.

Molise has a very varied cuisine. Among the most important products are olives, from which an excellent oil is produced, and wheat, which made bread and pasta of this region famous all over the world (fusilli were born here). The most famous bread is that of Venafro, which has also obtained international recognition.

The production of cold cuts and cheeses is also important. Absolutely to taste the caciocavallo of Agnone, a cow’s milk cheese whose sweet taste fades into spicy as it ages; Pietracatella cheese, made from a mix of cow’s, sheep’s and goat’s milk and aged in tuff caves dug under the houses of the historic center of the town of the same name, and Capracotta pecorino.

Among the cured meats, the soppressata, the capocollo and the ‘ntriglio, sausage seasoned with salt, pepper, chilli and garlic should be tasted.

Molise is also an area of the highly prized white truffle, which grows in the mountains of the provinces of Campobasso and Isernia: it is estimated that 60% of the truffle production in Italy comes from here.

The coastal menu is different, which of course is based on fish. For the Termoli brodetto, at least eight types of fish are used.

Among the desserts we remind the cancelle, similar to waffles, but with the addition of fennel seeds; the piccillati, cooked in the oven stuffed with black cherry; and the pigna, similar to panettone but lighter, traditionally prepared for Easter.

Among the wines, the Biferno DOC, produced in the Campobasso territory in the white, red and rosé types, should be mentioned.