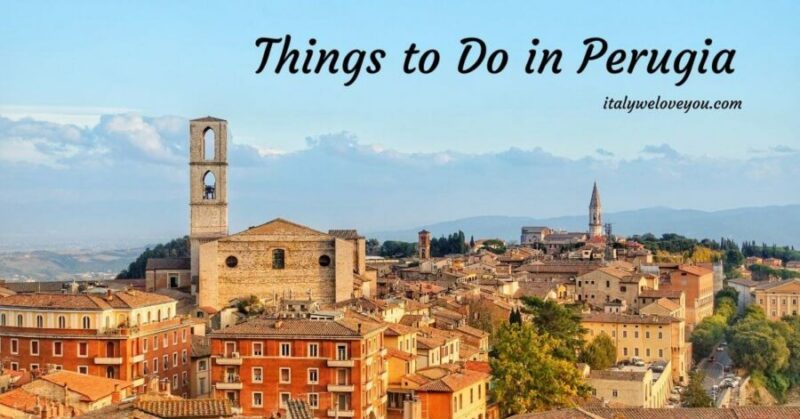 Perugia is a small jewel that still retains the aspect and rhythm of life of a fortified medieval town. The Umbrian town also holds notable artistic and monumental treasures.

Perugia is located in the heart of central Italy, on an acropolis set in the middle of the magnificent landscape of Umbria. In 2 and 3 hours of travel, by car or train, it is easily reachable from Florence, Rome and the Adriatic coast with Rimini and the Republic of San Marino. Its historic center, small and rich in history, can be visited in one day.

The history of Perugia dates back to the ancient Etruscans, who settled here many centuries before Christ. The Romans subsequently established an important colony (Perusia) there, while in the Middle Ages the town became a free municipality, remaining thriving and powerful until the sixteenth century when it came under the control of the papacy.

Top-Rated Attractions & Things to Do in Perugia

The visit of Perugia can start from the central square Piazza IV Novembre, seat of the ancient Roman Forum but with a medieval layout. Some of the most important historic buildings in the city overlook the square, from the Palazzo dei Priori to the Cathedral of Perugia. The works on the Cathedral dedicated to San Lorenzo, one of the patron saints of the city, began in 1345 and ended in 1490. Both the side facade and the main facade, however, remained incomplete. The lateral side faces the “Fontana Maggiore” fountain, and a geometric pattern of pink and white marble rhombuses decorates only the lower side. The main facade, on the other hand, overlooks the square Piazza Danti and is characterized by a Baroque portal from 1729. In the cloister of the Cathedral, you can visit the Capitular Museum, home to important works of art. 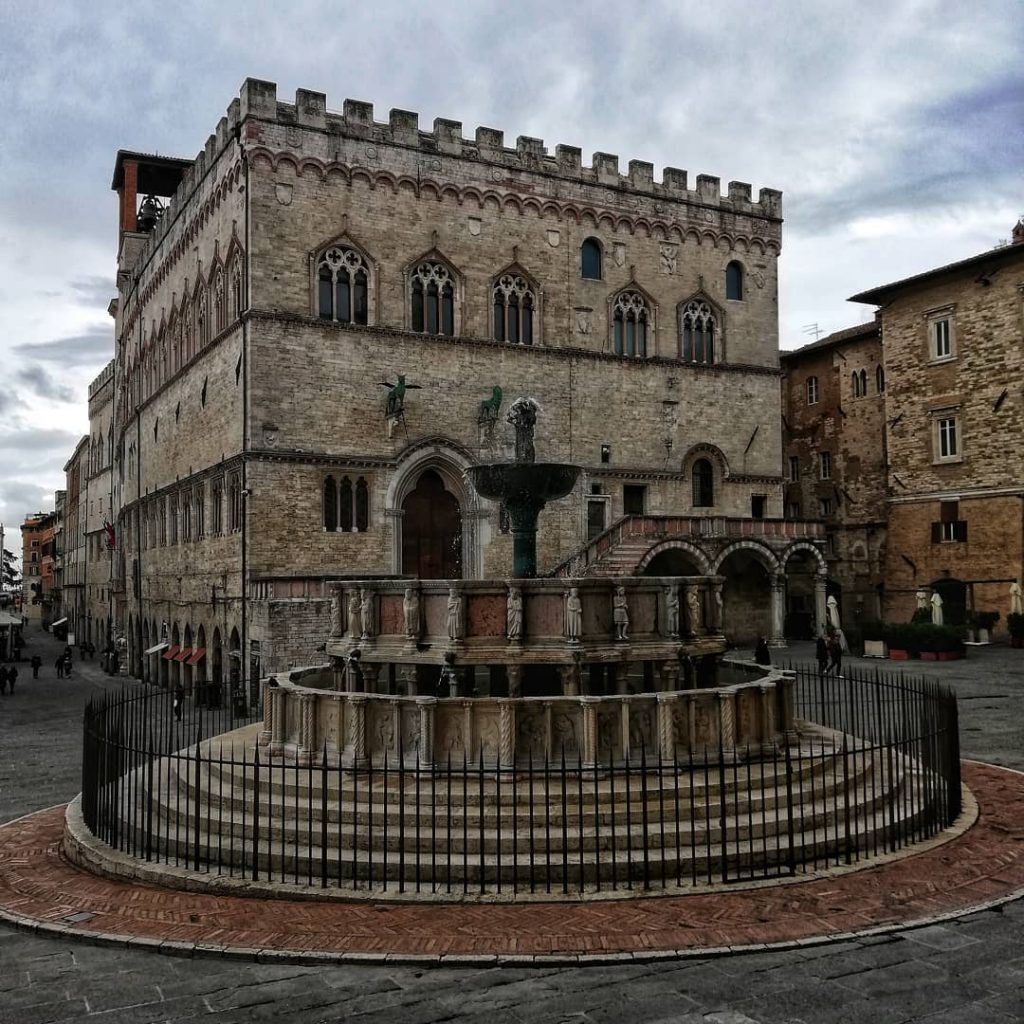 The “Palazzo dei Priori“ was the public palace of the city, seat in the past (and partly still today) of the Municipality of Perugia. It is one of the best examples of medieval, Gothic-style, palaces of this type in Italy. Inside we find several rooms, such as the “Sala dei Notari”, with arches and coffered ceiling, richly frescoed, while the Council Room boasts a fresco by Pinturicchio. In the Palazzo dei Priori there is also the “Collegio del Cambio”, the ancient seat of the bankers’ guild of Perugia. The “Sala delle Adienze”, frescoed between the end of the fifteenth and the beginning of the sixteenth century, is the masterpiece of Perugino, one of the best artists of the fifteenth-century Italian painting. Some parts of the frescoes were completed by one of his pupils, Raphael.

In the center of Piazza IV Novembre square stands the splendid Fontana Maggiore, one of the most beautiful fountains in Italy and a symbol of Perugia. The fountain was built between 1275 and 1278, based on a design by Nicola and Giovanni Pisano, with two pink and white stone basins and surmounted by a bronze basin. The Fontana Maggiore in Perugia was formerly fed by the aqueduct that drew water from Mount Pacciano. Built-in 1245, it was an extraordinary work because without using pumps it was able to bring water to a city as steep and full of gradients as Perugia. Decommissioned in the mid-1800s because it cost too much, today the aqueduct offers one of the most beautiful promenades in Italy. The upper area, in fact, is covered with stairs and defended by parapets, thus representing a road in all respects. The most characteristic part is the one that goes from the gate Porta Sant’Angelo (near the Cathedral and Fontana Maggiore) with a bridge supported by a dozen spans with large arches and low, colorful houses.

From Piazza IV Novembre starts Corso Vannucci, which with its shops and its historic premises represents the center of Perugian social life. From Piazza IV Novembre you can choose a direction and stroll along the ancient streets of the city center which now house restaurants, shops, and artisan workshops. The most popular streets that cut the historic center in two are Corso Vannucci and via Baglioni which end in the Carducci Gardens from where you can enjoy one of the most fascinating views of the city.

The National Gallery of Umbria is located along Corso Vannucci, on the top floors of the Palazzo dei Priori. The Gallery hosts one of the richest art heritages in the whole region. The works cover a period ranging from the thirteenth to the nineteenth century. Among all, masterpieces by Duccio di Buoninsegna, Piero della Francesca, Beato Angelico, Pinturicchio and Perugino stand out.

Rocca Paolina is an ancient fortress built by Antonio da Sangallo il Giovane for Pope Paul III.  The fortress was a symbol of papal authority until 1860, the year in which it was demolished following its annexation to the Kingdom of Italy. A section of the retaining walls and the bastion that incorporates Porta Marzia (an ancient Etruscan gate) of that ancient building are visible.

The heart of medieval Perugia extends from Piazza San Francesco, with the homonymous church which preserves two frescoes by Raphael. It continues along the narrow Via dei Priori, which runs alongside the Torre degli Sciri, one of the most influential families of Perugia in 1480. The tower is 46 meters high and has recently been reopened to visitors.

The Oratory of San Bernardino da Siena has a splendid polychrome facade by Agostino di Duccio and is the most distinguished Renaissance monument and church in Perugia. 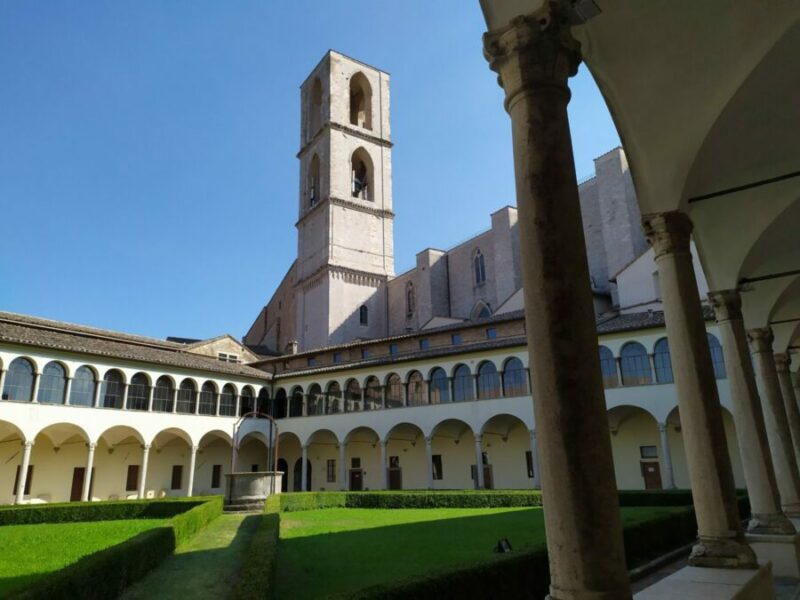 The imposing structure of the Basilica of San Domenico dominates the profile of Perugia even from afar. The large Gothic-style church has undergone numerous restorations, and part of its furnishings have been plundered over the course of history. However, it is worth a visit to admire its frescoes, the large stained glass window, the organ, and some valuable funeral monuments, including that of Pope Benedict XI.

Perugia also has a rich Etruscan past to tell visitors. To visit Etruscan Perugia, just walk along Via Marzia and admire part of the ancient walls, Porta Marzia, one of the seven surviving entrance gates, and the Etruscan Arch. Also interesting is the Etruscan Well, a large hydraulic work dug into the rock dating back to that period (3rd century BC). The well measures 37 meters deep by over 5 meters in diameter and in the past served as a water reservoir. The well is currently accessible thanks to a system of stairs that allow the visitor to descend to the deepest point. The brief descent into the depths of the earth is anticipated by a video explaining the history and the refined construction techniques of the well.

Perugia is also home to one of the most famous chocolate factories in Italy, the “Perugina”. The chocolate factory is located just outside the historic center of Perugia, in San Sisto, and it is possible to visit it by discovering the history of the company and, above all, to observe the production of “Baci” other chocolate products. The visit to the Perugina Chocolate House allows you to discover the historical museum that traces over a century of history of the famous chocolate, including vintage photographs, equipment and detailed explanations on the various stages of cocoa processing, a visit to the chocolate production lines, a beautiful and rich-tasting of Perugina products and finally access to the internal store. By the way, the whole city of Perugia is transformed into a large open-air chocolate shop in October, during the “Eurochocolate” event entirely dedicated to chocolate and its universe, including stands, cooking shows, special events, chocolate sculptures, themed gadgets and more.

Hypogeum of the Volumnus family

Just outside the historic centre of Perugia, in Ponte San Giovanni, there is an extraordinary place from the Etruscan period: it is the hypogeum of the Volumni, the oldest and most preserved funerary monument from the Etruscan era. The III century tomb. B.C., discovered in 1840, is part of the vast necropolis with more than 200 tombs of which only a part can be visited. The hypogeum takes its name from the Volumni, a rich and noble Etruscan family, of which it houses the remains. The beauty of the building lies in its characteristic shape of an Etruscan-Roman house and consists of an atrium and seven rooms.

Lake Trasimeno, the largest lake in central Italy and the fourth largest in the country, is just a half-hour drive from the center of Perugia, and is perfect for a day trip. If time permits, you can also swim: there are beaches in Castiglione del Lago, Tuoro al Trasimeno, Magione and Passignano sul Trasimeno. Otherwise, the coastal road that surrounds the lake is full of delightful medieval towns to visit and beautiful landscapes to admire.

Before leaving Perugia you need to taste its cuisine, linked to the Umbrian gastronomic tradition, simple, genuine, and of quality. Hams, cured meats, cheeses, and meats are the real stars of the tables. In the restaurants, among the traditional dishes, you can taste “Strangozzi” (homemade fettuccine with truffle), the guinea fowl “alla leccarda”” (topped with a sauce based on chicken livers and white wine ), the “Torta al testo” (a flatbread of flour, water and olive oil) and various recipes whose main condiment is truffles. Another Perugian specialty is the “Parmigiana di gobbi”: a dish made with cardoons, mozzarella, meat sauce, and Parmesan. There is no shortage of fish dishes: the “tegamaccio” (a flavored fish soup), crabs, trout and carp cooked according to tasty recipes. To complete the lunch there are desserts. In addition to chocolate, the most famous are: the “pinoccate”, made with pine nuts, and the “torcolo”, a donut with raisins and candied fruit.