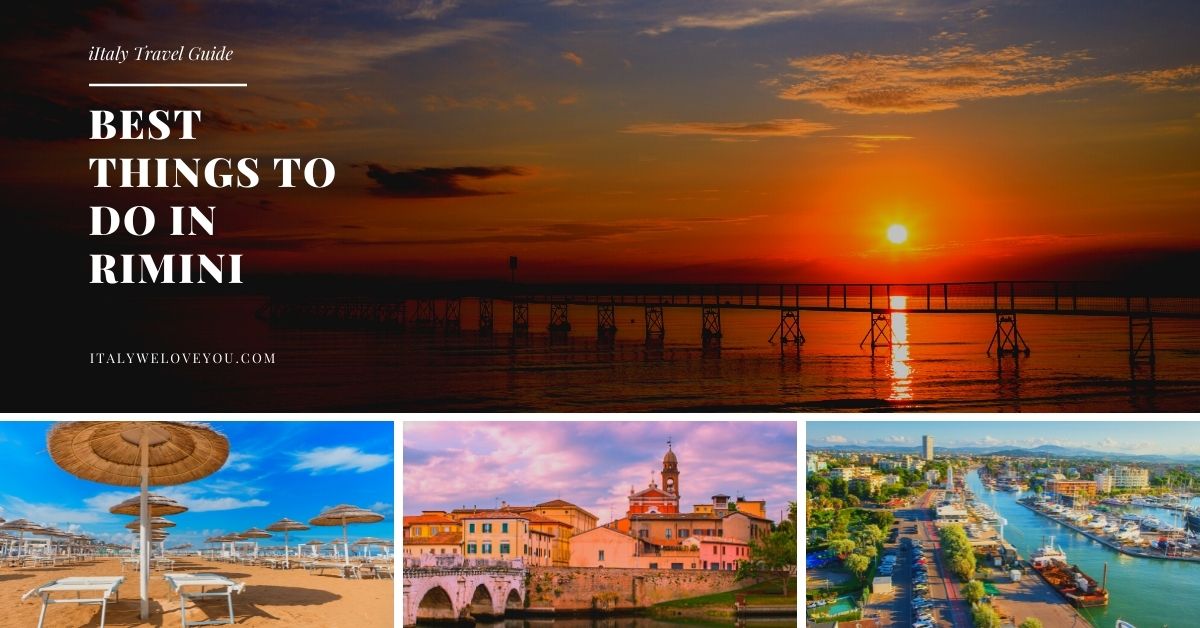 Rimini is synonymous with sea, summer, and fun. But the city is also able to satisfy the traveler in search of art, monuments, and historical testimonies. The foundation of Rimini dates back to 268 BC. by the Romans, with the name of “Ariminum”. More than 2000 years of history, therefore, in a city that has a lot to tell its visitors.

Things to Do in Rimini

The tour of the city can start from the Malatesta Temple, the Rimini Cathedral dedicated to Santa Colomba. The definition of Temple derives from its classical forms while “Malatesta” because it was wanted by Sigismondo Pandolfo Malatesta, Lord of Rimini from 1432 to 1462. The architect was Leon Battista Alberti who was inspired by the facade of the Roman triumphal arch. Before entering the church, visit the right side with seven arches that house the sarcophagi of the most illustrious characters of Sigismund’s court. The interior is in Gothic style with a single nave and six side chapels. The main works of the Cathedral are a crucifix by Giotto dating back to 1312 and a fresco by Piero della Francesca in which Sigismondo is depicted kneeling at the feet of Saint Sigismondo.

From the Malatestiano Temple you arrive at Piazza dei Tre martiri (Square of the Three Martyrs), the ancient Roman forum of the city. The statue of Julius Caesar reminds us that this space was once dedicated to him. Today the square is dedicated to the three young partisans hanged by the Nazis on August 16, 1944. The place of the hanging is remembered by an oblique marble slab on the square and is located a few meters from the small temple dedicated to Saint Anthony of Padua. The most photographed monument in the square is the Clock Tower built in 1547 with a calendar, zodiac movements and moon phases. Piazza Tre Martiri is, together with Piazza Cavour, the center of the city life of Rimini and a must for every visit to the city. From the square you can glimpse the Arch of Augustus, the oldest one preserved in northern Italy. Built in 27 BC as a monumental gate, from here you entered the city. A curiosity: the arch was so wide that it did not allow you to insert a door. This greatness wanted to symbolize that with the emperor Augustus Rimini had nothing to fear.

Piazza Cavour is the other most important square in Rimini, a meeting place for citizens and tourists thanks to the presence of numerous bars and restaurants. The central “Fontana della Pigna”, built in the 16th century, was the only source of drinking water in the center of Rimini until 1912. Next to the fountain is the monument to Pope Paul IV and in front, there is the Palazzo dell’Arengo, the highest expression of medieval civil architecture in Rimini, where the Rimini people’s council met. Nearby is the Palazzo del Podestà from 1300: the rope for hangings dangled in the central arch. Next to it, there is also the beautiful neoclassical-style Municipal Theater, inaugurated by Giuseppe Verdi in 1857. From the square, you can access the Old Fish Market, one of the most characteristic places in Rimini: fish was sold under the arches and on the marble counters. Today this area is the center of Rimini nightlife with an infinite number of cafè, restaurants, bars, and breweries.

In Ferrari square, there is the famous “Domus del chirurgo” (the surgeon’s house). These are the remains of an ancient Roman domus dating back to the 2nd century AD. The most beautiful structure is the villa inhabited by a certain Eutyches (Eutiche), a military doctor of Greek origin. Numerous objects found inside the domus, now kept in the city museum, including kitchen and tableware, about eighty ancient coins and, above all, 150 surgical tools. In the villa, the beautiful mosaics are still perfectly visible, including that of Orpheus. Thanks to the walkways that walk over the mosaics, it is possible to retrace the architecture and history of this house. To complete the tour it is essential to visit the Museum of the City of Rimini where the instruments and other artifacts are housed and where it is possible to admire the original scale reconstruction of the rooms of the domus.

A few steps from the “Surgeon’s House” is the Museum of the City of Rimini. Housed in a former convent of the Jesuit Fathers, the museum collects artifacts and works of art recovered from churches and city buildings. The two main collections are the archaeological one and the art gallery with works from the 1300s. The archaeological collection already begins in the entrance garden with the tombstones recovered from the various necropolises scattered around Rimini and continues with the finds from the Surgeon’s House. The art gallery preserves many masterpieces of Italian art. The section with the works of the 1300s from the Rimini school is very rich. In the Malatesta rooms are collected the works that the powerful Rimini family commissioned to great artists such as Giovanni Bellini, Domenico Ghirlandaio, Agostino di Duccio, Pisanello and Matteo de ‘Pasti, Guido Cagnacci and Guercino. The section dedicated to the Rimini artist René Gruau, a very famous fashion illustrator who has worked for the most important magazines in the world (Vogue, Marie Claire) and for the most exclusive fashion houses (Dior, Biagiotti, Balenciaga) is very nice. It was Gruau who designed the poster for Fellini’s “La dolce vita”.

The Tiberius Bridge, over the Parecchia River, was completed in 21 BC by Emperor Tiberius, from whom it takes its name. For 2000 years, the bridge with its five arches has marked the beginning of two historic roads of the Roman Empire: the Via Emilia towards Piacenza and the Via Popilia towards Aquileia. Built entirely of stone, the bridge is a small architectural gem. To admire it, we recommend going down to the new “Piazza sull’acqua”, a park at the foot of the arches where you can stroll and discover the history of the bridge.

After crossing the Tiberius Bridge, the city changes its face: the city atmosphere gives way to that of a seaside village, with low and colorful houses, alleys, and small typical taverns. We are in San Giuliano, a fishing village close to the Marecchia river. The village today is one of the haunts of the Rimini nightlife, even if different from that of the seafront. In the village meet those looking for an aperitif in a relaxed and more authentic atmosphere or a candlelit dinner in restaurants. The history of the village is indivisible from that of Federico Fellini who loved this place and its characters very much, then re-proposed in the films, in particular in “Amarcord”. The village paid tribute to the master with a series of murals that portray situations and quotes from his films

Rimini is certainly famous for being one of the world capitals of summer fun. For young people, the evening entertainment is concentrated on the promenade, the port, and Marina Centro. In the shadow of the Ferris wheel, overlooking the sea, a kilometer-long path of bars, restaurants, trendy clubs, places to listen to music, and so on winds its way, in an offer that never ends.

Holiday with children in Rimini

Rimini is also a city suitable for children. The Romagna Riviera is made up of fine sandy beaches and gently sloping seabeds, perfect for summer holidays. The beaches are spacious and children can play on them safely. Fifteen kilometers of sand with 250 bathing establishments, all (or almost) perfectly equipped for the needs of families: games, entertainment, changing tables, and – in the most family-friendly cases – even services such as babysitting on request.

Around Rimini, there are also some of the most beautiful amusement parks in Italy, and really if you are on vacation in these parts it is a shame not to bring the children. There is “Italy in Miniature“, with over 270 scale reproductions of Italian monuments, churches, palaces, and squares and immersed in a natural scale landscape consisting of five thousand real miniature trees. Around there are numerous mechanical and thematic attractions. The total area of the park is 85,000 m².

Another theme park is “Fiabilandia”, which is also perfect for younger children. The entire structure is developed around the great Lake Bernardo and has a total of over 30 attractions, green areas, dining options and educational trails for children. It is divided into 5 thematic areas: Far West, Medieval, Oriental, The Pirate Bay and the Magic Village.

Without forgetting “Aquafan“, a water park with its pools and slides suitable for all ages and, of course, “Mirabilandia”, one of the most famous amusement parks. Mirabilandia, which is located a few kilometers from Ravenna, is the largest amusement park in Italy by extension, with a total area of 850,000 square meters and 47 attractions. Inside there is also the Mirabeach water park. Great space is also left for the fun of the whole family with the Far West Valley dedicated to the world of the Far West and Dinoland, the largest area in Italy dedicated to the kingdom of dinosaurs.

The “Oltremare” Aquarium, with over one hundred exhibition tanks and four pavilions that correspond to as many thematic itineraries, accompany us in the marine world. With its 3000 specimens of 400 different species from the seas around the world, it really seems to be immersed in an underwater environment. “Underground” connections, real underwater laboratories, lead visitors on an engaging journey, aimed at learning about and respecting the marine ecosystem, offering maximum excitement and fun to all age groups. For example, there are over 60 sharks in the aquarium, of 13 different species. Then we have the tropical fish tank and the large tactile tank where there are sharks with a ray-like appearance, ready to be caressed. A short visit also to the fourth route, dedicated to reptiles and exotic animals (chameleons, iguanas, insects and snakes). In the Dolphin Lagoon, the largest in Europe, adults and children can get to know the habits and behaviour of dolphins up close in the company of an expert who will answer their every curiosity. Finally, in the Valley of the birds of prey it will be possible to admire eagles, owls, hawks and vultures and discover their characteristics. 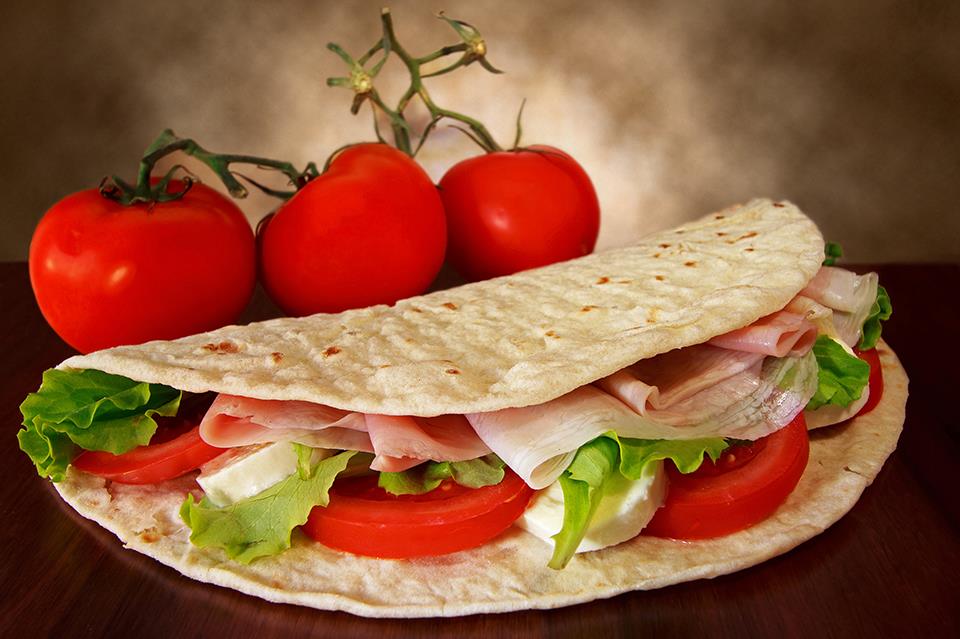 Romagna, where Rimini is located, is one of the most important regions from the point of view of Italian gastronomic traditions. The most classic of the gastronomic specialties of Romagna is the “piadina”; there are few elements needed for its preparation: flour, salt, water and lard. To be able to taste its true flavor, however, it must be made, cooked and eaten on the spot, combining the soft cheese “Squacquerone” cheese or stuffing it at will with local cold cuts. After the piadina, pasta is one of the staples of Emilia-Romagna cuisine and, consequently, also of Rimini. The variety of first courses, celebrated all over the world, is unique: tagliatelle, strozzapreti, cappelletti, maltagliati, lasagna and passatelli, which according to tradition, are accompanied by very tasty meat, fish, vegetable sauces or in tasty broths.

A special mention should be made, however, to the “cappelletti” that characterize the tables of Romagna: a pasta filled with cheese, eggs and herbs that in the last two centuries has introduced the presence of even three types of meat (pork, veal and capon). Grilled fish or fried fish are always present in this seaside city. Also try the rabbit in porchetta, a delicious dish that combines rabbit, bacon and a mixture of aromatic herbs. Last but not least, the most famous wines of the area are Sangiovese, Albana bianco, Pagadebit, Trebbiano and Colli di Rimini.