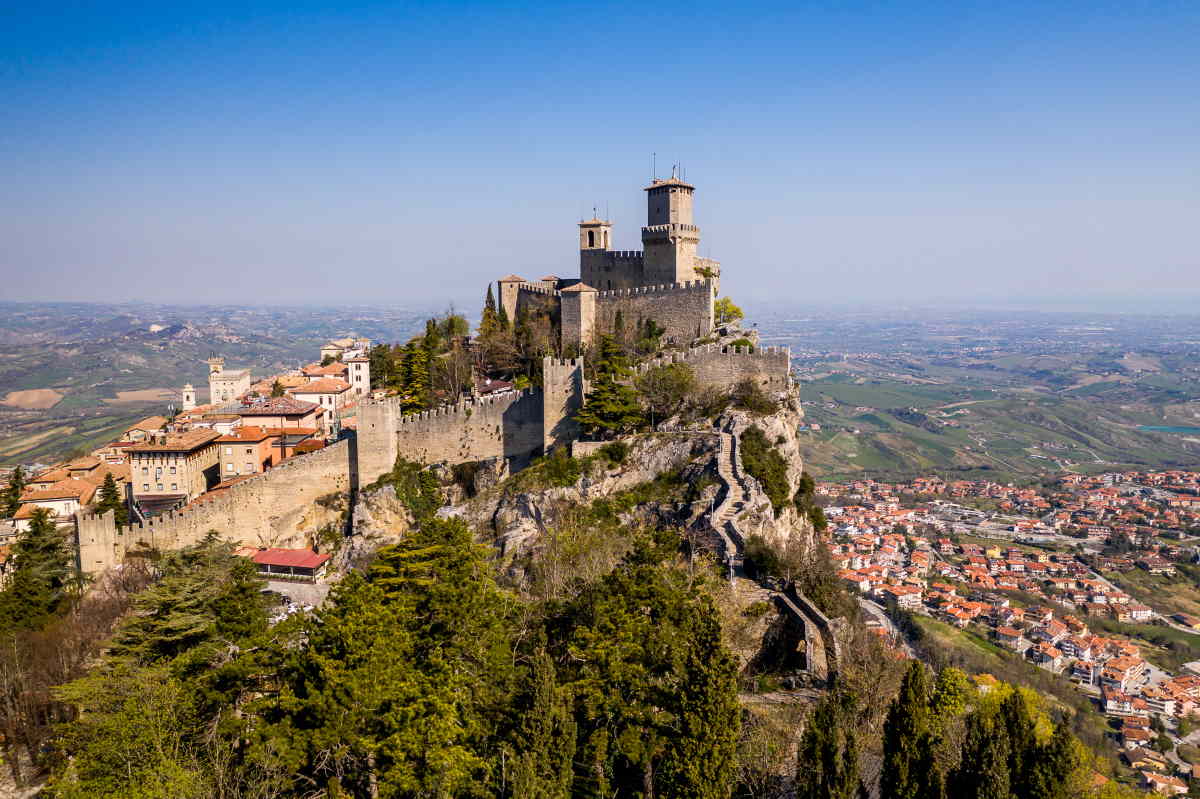 The Republic of San Marino is located about forty minutes by road from Rimini, so combining a visit to this splendid medieval town with a beach holiday at the nearby Adriatic coast is possible. The tiny State capital is perfect for a weekend or day trip. The State of San Marino covers an area of ​​61 square km and is the third smallest State in Europe and the fifth on the planet. Of course, the most visited place is the town center where you can find almost all the attractions that the Country offers, including the government building whose headquarters is the Palazzo Pubblico (Public Palace) in Piazza della Libertà. San Marino is also one of the oldest States in the world. According to legend, the foundation dates back to 301, when a saint, Marino, created a small community of Christians on Mount Titano. San Marino, although its inhabitants speak Italian and are of Italian culture, is an independent State in all respects. Moreover, San Marino and Mount Titano are part of the Unesco World Heritage Site.

Reaching the fortified town on Mount Titano and therefore its historic center is very simple: there are several car parks where you can leave your car. For example, the P9 car park allows you to park near the San Francesco gate, the main entrance to San Marino. The alternative is to use the panoramic cable car near the P11 car park, in this way you will have the opportunity to combine the entrance to the town with a panoramic view of the hills below.

Going up from the car park, you will then find yourself in front of the San Francesco gate, the main access to the town and its historic center. Built in 1361 as a guard post, it was subsequently enlarged and raised in 1451. It takes this name as it was obtained from the walls of the Franciscan Convent.

If you want to visit a beautiful church in San Marino, this could be the Church of San Francesco, the oldest sanctuary in the Republic. Dating back to the fifteenth century, the church houses a beautiful wooden crucifix. In the complex, there is also the interesting San Francesco Museum, where paintings by Raphael and Guercino are also exhibited.

A walk among the medieval houses and the shops of the historic center of San Marino, with a view of the surrounding landscape that extends to the sea, is a must for all tourists of the small State. You will find yourself strolling along narrow, gently sloping alleys paved with stone slabs. Many visitors do not fail to go shopping as well, as in San Marino many products cost much less than in Italy. In its historic center there are numerous shops with traditional San Marino products: hand-painted ceramics, art objects worked in iron, wood, and precious materials, lace, embroidery, and canvas prints. And then tasty confectionery products, such as the Tre Torri (Three towers), the typical sweet of San Marino.

Inside the walls, on your right, you will notice the Torture Museum. It is a very special museum, judged as one of the most disturbing in the world. It unfolds on three floors, connected to each other by a spiral staircase, and shows visitors different methods of torture. The Museum collects more than 100 devices, dating back to the 16th and 17th centuries, or reconstructions from the 19th and 20th centuries.

Along the street Salita alla Rocca, there is also the Museum of Curiosities, without doubt, the strangest museum in San Marino. In fact, it collects bizarre objects and curiosities in full Guinness Book of Records style. In addition, to amaze visitors even more, in the summer months there is a special transport service that connects the museum to the parking lots further away from the historic center: it is not an ordinary vehicle, but a traditional 1913 Ford bus, still working.

Continuing on the uphill street to the left, you will arrive at Piazza del Titano (Titano Square) where you will find the State Museum of San Marino, which collects archaeological finds, San Marino coins, and medals, art objects from various eras, and from all over the world, in many cases the result of donations by heads of State to the small Republic.

The nearby quarry of the Balestrieri was opened and used in the last decades of the nineteenth century to extract the stone to be used for the restoration of the Palazzo Pubblico. Since the 1960s, the area has been equipped for shooting with the Italian crossbow. Before the construction of this new competition field, the tournaments were held in Piazza della Libertà on the occasion of the patron saint’s feast (September 3) or to greet the visit of illustrious personalities. A little further on you come to a large viewpoint.

Going up again, after a few steps you will arrive at Piazza Della Libertà, the center of the town of San Marino. Here you can visit the Palazzo Pubblico where the Country’s government resides. The government building is in the heart of political life and can be visited for a fee. Its shape is somewhat reminiscent of that of Palazzo Vecchio in Florence and dates back to the late nineteenth century. You will have access to the beautiful Council Chamber where the 60 councilors elected by the citizens every 5 years meet. The various State ceremonies are also held in the public palace and you can see the changing of the guard which, from May to September, takes place every hour between 9.30 and 17.30. The facade is dominated by the Clock Tower and in the center is the balcony from which the names of the rulers are announced.

In the square in front of the building is the Statue of Liberty, one of the symbols of San Marino. It is a Carrara marble statue donated to the Republic of San Marino by Countess Otilia Heyroth Wagener of Berlin. This square is perfect for its spectacular view of the surrounding hills. The square is in fact a real natural balcony from which to admire the view.

The cable car is only a few meters from Piazza della Libertà and every 15 minutes connects the car park to the city center. The whole area around the arrival of the cable car is equipped with panoramic points.

The Basilica del Santo (Basilica of the Saint) was designed and built starting in 1826 by Antonio Serra, a Bolognese architect, on the area of ​​the ancient sixteenth-century church that was demolished to make way for the new one. It is the main sacred building in the Country because it preserves the relics of Saint Marino. Under the church, the stone crypt was built in 1914 where the urn in which the saint’s bones are kept. The current Basilica, consecrated in 1855, is in the neoclassical style. The massive bell tower was rebuilt in the 17th century instead. On the right of the Basilica, there is the small church of Saint Pietro, from the 16th century, remodeled around 1826. It is accessed through the sacristy by means of a staircase made in the bell tower of the main Basilica. The apse of the church of San Pietro is entirely made up of living rock: two niches are carved into it that popular tradition indicated as beds of Saint Marino and Saint Leo and to which the faithful attribute thaumaturgical properties.

Mount Titano is depicted on the coat of arms of the Republic of San Marino with the three towers protecting San Marino and representing the most spectacular buildings of the small State. The two main towers to see are the Guaita and the Cesta. The Montale tower is almost isolated and structurally different from the other two.

The Guaita tower dates back to the 11th century and is also called Rocca Maggiore. The first residential area of San Marino was built around it. It was a very important point for the defense of the town. The high stone tower, square and rough, is surrounded by two town walls: from here you can enjoy a splendid view over the entire valley and the plain to the Adriatic Sea; with its 360-degree view of the surrounding area, it was essential for spot possible enemies on the horizon.

The Guaita tower starts the “witches path”, a very suggestive path leading to the Cesta tower. It occupies the highest point of Mount Titano (755 meters above sea level) and represents the second point in defense of San Marino. In the past it was used as a prison, now inside there is a Museum of Ancient Weapons, an armory that houses over 700 weapons from various eras. It is very interesting to discover how some weapons derive from tools first used in the peasant context. Finally, you can reach the Montale tower through a path surrounded by vegetation. With a pentagonal plan, the third tower of San Marino was completed in the second half of the 15th century and remained in operation until the 16th century. Then, it housed a prison and today it cannot be visited inside.