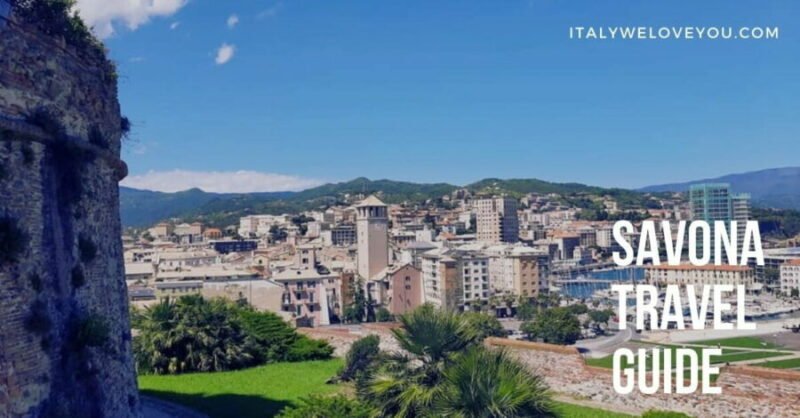 Savona is the third-largest city in Liguria by population, after Genoa and La Spezia and it is an ancient city and rich in history. Furthermore, the city is an important reference point for ferries and cruises.

Things to Do in Savona

Savona is a city that can be easily explored on foot in one day, walking from the sea to alleys, among narrow streets and colorful buildings. Its city center is in fact made up of a series of medieval alleys and a network of wider streets, full of shops and various commercial activities. Among them, the elegant street Via Pia and the famous Via Paleocapa, about 600 meters long, characterized by arcades that allow walking even in case of rain, as well as enclosing most of Savona’s shops, stands out.

One of the symbols of the city is undoubtedly the Priamar fortress. It is a large complex located near the port and built between 1542 and 1544 by Genoa to demonstrate its supremacy over Savona. It is the most important military fortress in the whole of western Liguria and despite this, for a long time it was abandoned to itself. Only in recent years has the fortress been restored and is now the seat of various cultural associations. It houses the Archaeological Museum and the Pertini Museum and in summer it turns into an open-air theater with the Chiabrera theater in the summer opera season. Admission to Priamar is free, you only pay for access to the museums and, of course, the theatrical performances.

Close to the Priamar are, on one side, the “Walter Tobagi” seafront promenade with a succession of bathing establishments and some free beaches, and on the other side the port and the dock: today it is not only the ideal place to take a stroll and stop for a drink or something to eat, but it is also one of the most renowned places in Savona’s nightlife.

In front of the dock is the Brandale tower, one of the symbols of Savona. The tower is affectionately called “Campanassa” because it houses a large fourteenth century bell, whose tolling marks the most important events in the city. The tower can be visited, but only by appointment.

The Palazzo degli Anziani (Palace of elderly), next to the Brandale tower, is a sort of lapidary museum. Inside the fourteenth century building, where the medieval Assembly of elders resided, are kept the tombstones and the inscriptions coming from the demolished or destroyed buildings in the historic center of Savona.

The Leon Pancaldo tower (or Torre della Quarda) is commonly called “Torretta” (little tower) and is identified as the main emblem of Savona. It is a square building with a base of about six meters per side and a height of 23 meters. It is a medieval fortification located near the port. Originally it was part of an ancient wall that protected the city. Unfortunately the tower, as well as the rest of the walls, failed to protect Savona from the attacks of Genoa in 1527. The Genoese army, despite having destroyed practically all the walls, spared this construction.

The tower, as well as the square where it stands, was dedicated to the navigator Leon Pancaldo, born in this city in 1482 and died in Rio de la Plata in 1540. Pancaldo participated in the first circumnavigation around the world as helmsman of the ship Trinidad, orders of Ferdinando Magellano.

The Cathedral of the Assumption is the mother church of Savona. This construction, which measures 61 meters long and 39 wide, is one of the main places of worship in the city and it was built in the end of XVI century. The vaults of the central nave and transept are barrel vaults, while those of the side aisles are cross vaults. The bell tower is located on the right side and was only finished in 1929.

The Sistine Chapel is a place of worship adjacent to the Cathedral of the Assumption. This splendid building was erected on commission of Pope Sixtus IV from Savona towards the end of 1400 as a mausoleum for his parents. The main facade of the chapel is in Gothic style, while the interior consists of a single rectangular nave with a ribbed vault and a square apse. Also of note is the important presence of a pipe organ, the work of the Genoese Filippo Piccaluga and his son Felice Piccaluga dated 1764. Particularly noteworthy is the wooden choir, built at the behest of Giuliano Della Rovere, future Pope Julius II. The papal apartments are also part of this complex: they were inhabited by Pius VII who spent two periods of his life here (from August 1809 to June 1812 and between February and March 1814) as a prisoner of Napoleon. The cathedral, the Sistine Chapel and the papal apartments can be visited together by taking part in a guided tour.

The Civic Art Gallery of Savona represents a real itinerary through pictorial art, covering a period ranging from the 1300s to contemporary art. Among the works of art there is the Crucifixion by Donato de ‘Bardi and the imposing polyptychs that document the artistic flourishing of the city between the 15th and 16th centuries. Inside there is also a permanent private collection with works of art by Magritte, De Chirico, Fontana, Jorn, Dubuffet, Twombly, Man Ray and Picasso. Seven centuries of art that represent the heritage of the city in the beautiful context of the Gavotti Palace.

The processing of ceramics is an important activity for the local Riviera. The Savona Ceramics Museum is one of the most important ceramic museums in Europe; this art finds its rightful tribute here, thanks to four floors of exhibition, with works of art created by generations of artisans and artists. Specifically, there are a thousand unique pieces that cover a period ranging from the Renaissance to the 1900s, from the Renaissance to Futurism. The museum is housed in the Palazzo del Monte di Pietà and also organizes seminars and educational works to bring new generations closer to this ancient art. Admission is subject to a fee.

All About Apple Museum

The All About Apple Museum turns out to be a unique museum of its kind, a true national reference point for technology lovers. It is the most well-stocked museum in the world for Apple products. In fact, it offers practically all the production of the famous US company founded in 1976 by Steve Jobs, Steve Wozniak and Ronald Wayne, showing all its creations to the public: from the first prototypes of the mid-70s to the latest iPhones. For iPhone and Mac enthusiasts, this is one of the places to visit in Savona.

Managed by the NGO of the same name, founded in 2002, the structure offers the public an impressive amount of electronic devices that have made history. In fact, inside the Museum, it is possible to see over 9,000 pieces, most of which Apple (although there are also other historic electronics brands such as Atari, Commodore and Olivetti). It is a real paradise for technology lovers who are no longer very young. Among the many objects that, until a few years ago, were synonymous with innovation, it is possible to appreciate mice and keyboards as well as floppy disks, hard disks, manuals and much more. Most computers, devices and peripherals are still functional and you can try them yourself. Recognized by Apple itself as an important testimony of the company’s past, this museum is a well-known attraction throughout Italy and beyond. In this sense, the number of visits is constantly growing and, constantly, this institute is enriched with new pieces donated by ordinary citizens.

Finally, it is interesting to point out a very particular rite of the city, which takes place in Piazza Mameli at 6 PM: everything stops for a minute to remember the fallen of all wars. A truly moving ritual.

The Sanctuary of Our Lady of Mercy is located in San Bernardo, a village near Savona. From Priamar you can get there by bus n ° 3 in about 20 minutes. Completed in 1610, this Marian sanctuary seems to have been built after the apparition of the Madonna to a local farmer. In Mannerist style and rich in 17th century frescoes, the church houses a beautiful statue of Mary Mother of Jesus in the crypt and is considered the spiritual heart of the entire sanctuary. In the complex it is also possible to visit a small museum of sacred art and the beautiful garden.

As for eating in Savona, the city is famous for the white “farinata”, a kind of savory pie prepared with wheat flour and a small percentage of chickpea flour. Compared to “normal” farinata, whose cooking process is the same, it is more crunchy.