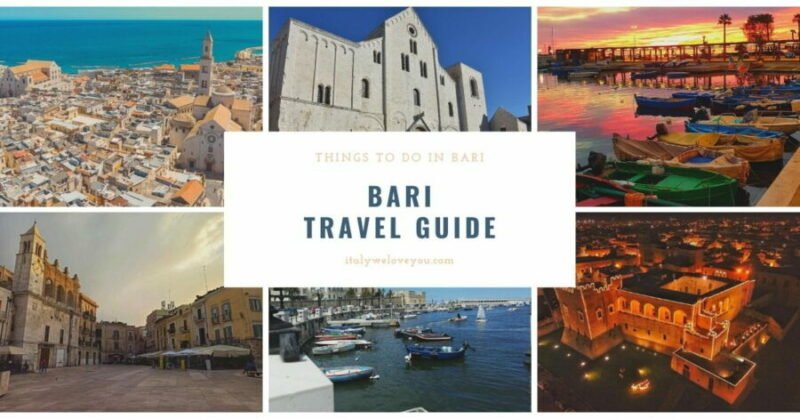 Bari, the capital of Puglia, is characterized by a Mediterranean climate and is worth a visit for its good food and the many monuments to see. It doesn’t take much time to visit Bari. Just one day is enough. The visit to the city can start from the seafront, one of the most beautiful in Italy. The Bari seafront was inaugurated in 1927 and today is one of the city’s famous promenades and a unique opportunity to admire at a glance many Art Nouveau buildings, and at the same time breathe the atmosphere of Bari, among green parks and an incomparable view of the Adriatic Sea.

Best things to do in Bari

The two most important historic buildings in Bari are the Church of San Nicola (St. Nicholas), a few meters from the sea, and the Swabian-Norman castle, one of the most important Romanesque style monuments in Italy.

Basilica of  St. Nicholas is one of the most important religious buildings in Italy. St. Nicholas of Myra, patron saint of Bari, a saint dear to both Catholics and Orthodox, is the bishop who, according to legend, gave the origins to Santa Claus. His remains rest right in the crypt of this basilica and therefore it is a pilgrimage destination for Catholic and Orthodox faithful: it is in fact one of the few Italian places of worship where the functions of both rites are celebrated.

The basilica of  St. Nicholas was built precisely to house the remains of the Saint, in 1089: today it is one of the most visited places in Puglia. It is a wonderful example of Romanesque style and inside you can admire the gilded wooden ceilings with XVII century paintings, the silver altar and the Chair of Elia, one of the most representative Romanesque sculptures of Puglia. In addition, a famous legend tells of a Miraculous Column, present in the Crypt, capable of marrying single women if on December 6, after the dawn mass, they make 3 laps around it, touching it.

The Treasure of St. Nicholas, which continues to grow thanks to the gifts and votive offerings of the faithful, is kept in the Nicolaiano Museum adjacent to the Basilica and collects, among other things, silver, illuminated manuscripts and precious parchments.

The Swabian-Norman castle was built on the previous castle wanted by Ruggero the Norman in 1131; this building was completely destroyed in 1156 and rebuilt according to the will of Frederick II of Swabia in 1223. The Castle stands out over the old city of Bari, protecting its main entrance and from here it dominates the sea. In addition to its important historical value, the Castle is the seat of the Superintendence for Architectural and Historical Environmental Heritage of Puglia and is one of the most important Romanesque style monuments in Italy. The building is made up of two distinct parts: the Keep includes two of the original towers, while the other part includes the bulwarks and other towers added in 1500. A bridge over the moat welcomes visitors at the entrance: on the inside, they overlook a Gothic portal and a Renaissance courtyard. On the ground floor, the Castle houses a plaster cast gallery with some casts of the most important monuments of Puglia. Transformed into prison and barracks in the nineteenth century, today some rooms are open to the public and host exhibitions.

Those who want to discover the true spirit of Bari cannot miss a visit to Bari Vecchia (Old Bari), by day the ancient and popular heart of the city and by night a trendy place for young people. The district of San Nicola (Bari Vecchia for the people of Bari), where most of the architectural and museum assets of the city are concentrated, lies between the two ports of Bari, the old and the new one, overlooks the seafront and it is the historical center of the city. The core of Bari Vecchia dates back to the Middle Ages, it is enclosed within walls and dominated by the Norman Swabian Castle, which is one of the symbols of Puglia. The Basilica of St. Nicholas is located in this area, as is the suggestive Cathedral of San Sabino, which dates back to 1100. The Cathedral, with its Romanesque architectural lines, recalls those of the Basilica of St. Nicholas. The Cathedral is full of history, faith and art. On 21th of June, the day of the summer solstice, something incredible occurs: the sun’s rays, coming from the rose window on the central facade, penetrate the cathedral and illuminate the identical marble rose window on the floor of the nave with 18 petals.

Also not to be missed is the “Muraglia“, which is the stretch of ancient walls that offers the opportunity to admire an exciting panorama especially at sunset. The highest point of the Wall is represented by the Fort of Sant’Antonio Abate, built for defensive purposes in the XIV century and today used for cultural events. On the right, we admire the seafront with its majestic buildings and the Clock Tower of the Palace of the Province, dedicated to the Martyrs of the Great War and the Fascist Revolution. On the left, the Wall follows the perimeter of the historic center and ends near the port area.

Corso Vittorio Emanuele II is the central avenue that leads to the historic center and begins the new “Murat” district. Bordered by large palm trees, along the Corso, we find the Town Hall and the Niccolò Piccinni Theater, the oldest theater in the city, dedicated to the homonymous composer from Bari. This is one of the main streets of the Bari nightlife consisting of many places open for lunch and dinner.

Dedicated to a rich merchant from Ferrara who lived in Bari in the XVII century, Piazza del Ferrarese is a square that preserves traces of the pavement of the Via Appia Traiana built by the Romans. This square manages to express its beauty in the evening because looking out over the “Wall” it offers a suggestive and romantic panorama.

Another symbolic place of the city is that area overlooking the sea which in Bari is known by the name “N’derr alla Lanz”, so-called because the wooden boats in the Bari dialect are called “lanz”. It seems that fishermen once came here, docked their boats and threw the fish ashore to sell. People said they bought it from “n’derr alla lanz”: right at the foot of the boats. Here (Molo San Nicola) every day, sea permitting, the fish is bought and sold with dozens of fishermen engaged in placing their product.

Before returning to Bari Vecchia, take a break at the Petruzzelli Theater. It is a historic theater, inaugurated in 1903, as well as an emblem of the city. This is the largest theater in Bari and the fourth largest in Italy. The theater has only been returning to its original splendor for a decade, thanks to the lengthy renovations that followed the dramatic fire of 1991. Temple of classical and opera music, today the Theater opens to musicals and concerts by great international and national artists of light and rock music.

If you want to discover the soul of Bari and its ancient tradition, you must pass the Arco Basso (Low Arch), to enter the street of the same name (via dell’Arco Basso, also called “Via delle Orecchiette”). It is this small street that has made Bari so famous worldwide, thanks to the skilled hands of the ladies who live there and who prepare fresh pasta every day. Here the women are intent on preparing fresh pasta like “strascinet” (orecchiette), “fascinet” (smooth fusilli), cavatelli, or priest’s hats simply mixed with water and durum wheat semolina. A real exhibition en Plein air. It is this unique feature in the world that makes tourists visiting the city fall in love.

Behind the Petruzzelli Theater, the “Palazzo dell’Acqua” (the Water Palace) is the heritage of Puglia and the current seat of the Apulian Aqueduct. Built from 1925 to 1935, in perfect Romanesque style, we find Trani stone decorations on the external facade and precious frescoes and pictorial decorations inside. The Museum of the History of the Apulian Aqueduct preserves a piece of history of the largest aqueduct in Europe.

For art lovers, the Corrado Giaquinto Provincial Art Gallery is one of the most interesting museums in Bari. Dedicated to the great XVIII century painter Corrado Giaquinto, the art gallery provides extensive documentation of Apulian art starting from the Middle Ages. Inside are the paintings of the greatest Apulian artists of the XIX century.

If, on the other hand, you are interested in shopping among the great international fashion brands, go to Sparano Street. Beyond the shopping, this street deserves to be seen especially as here you will find the splendid Mincuzzi Palace, one of the most beautiful buildings in Bari, in Art Nouveau style (built-in 1928). Completely intact on the outside, inside you can see meticulous details: refined floors, marble columns, and one of the first elevators in the city at the beginning of the twentieth century. The Murat district represents the modern area of the city that starts from Corso Vittorio Emanuele and extends to the Central Station. Here it is pleasant to walk through the streets and let yourself be conquered by the beautiful buildings of the late eighteenth and early nineteenth centuries.

Place of markets and commerce, Mercantile Square, in medieval times, played a fundamental role. On the one side Palazzo del Sedile, in the past seat of the Council of Nobles, and on the other side the famous column of justice, or infamous column: it was the pillory for debtors, insolvent and bankrupt. Today this square is the destination of the Bari nightlife.

About food, one of the typical products to taste in Bari is the “focaccia”. The Bari focaccia (with tomatoes and olives) can also be an excellent solution for lunch. Obviously, there are also other renowned dishes of the local tradition, from “sgagliozze” to fried panzerotto, from raw fish (mussels, oysters, octopus) to broad bean puree, from raw ham (cooked with oil, salt and pepper) to “orecchiette”. The most famous dish is that of orecchiette, which the people of Bari cook with turnip greens but which nothing prevents them from preparing in a thousand other ways. More than the possible condiments, therefore, the added value is precisely the handmade pasta that is often made on the doorstep in some alleys of Old Bari. 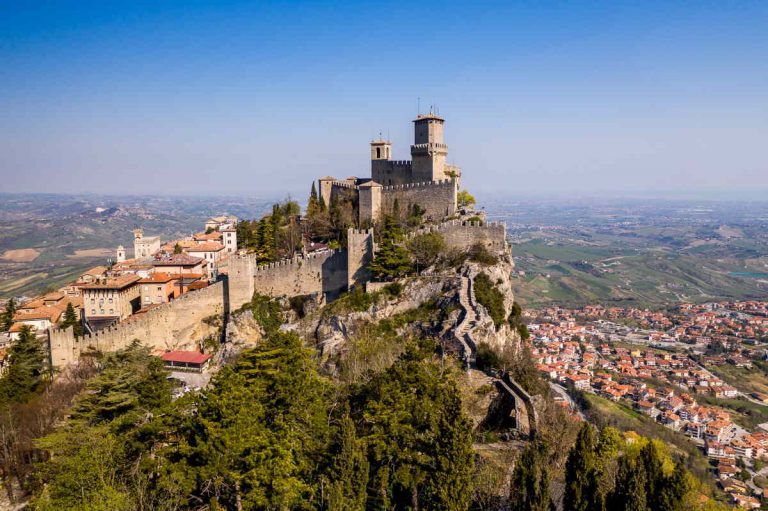 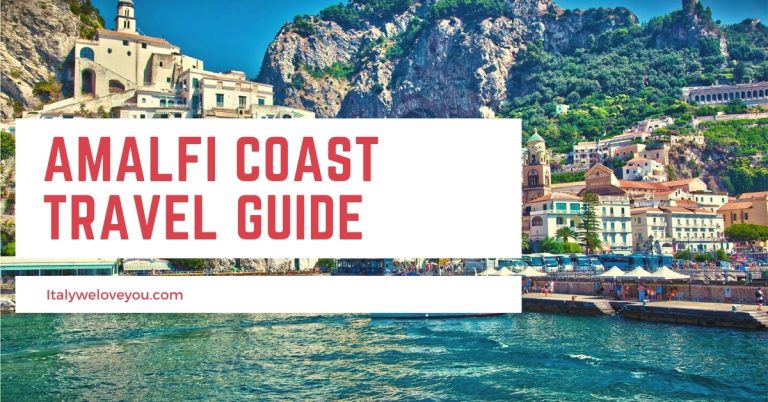