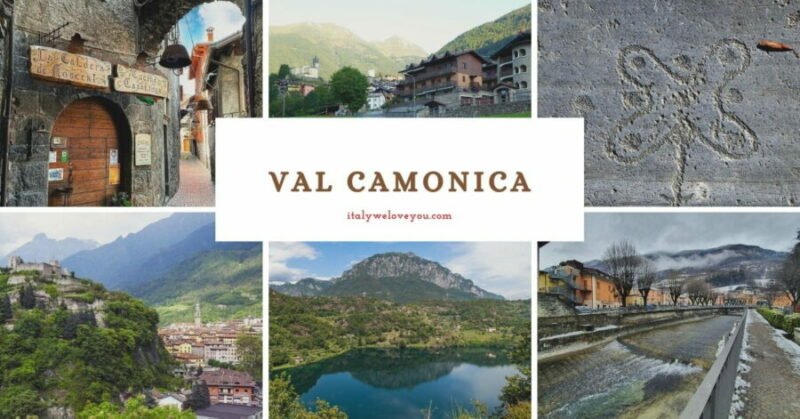 Val Camonica is a valley in Lombardy, one of the largest in the central Alps, almost 100 km long. The valley has always been synonymous with culture, art, and history. In addition to the archaeological heritage of the Roman period, the beautifully frescoed churches, the numerous medieval towns and castles, and the interesting museums, Val Camonica also means nature and sport, thanks to the presence of important ski slopes, the many routes dedicated to mountain bikes and the paths for trekking.

Things to do in Val Camonica

The main attraction of Val Camonica is the National Park of Rock Engravings. Located in Capo di Ponte, in the locality of Naquane, the Park is considered one of the largest complexes of engraved rocks in the world. You can walk in the suggestive wooded environment of the park, admiring the hundreds of engraved rocks, dating from the period between the Neolithic and the Iron Age.

The quantity and importance of the signs found in this area immediately attracted the attention of Unesco, which already in 1979 named Val Camonica a World Heritage Site. This is the first site awarded this title in Italy. The sites studied to date are over 180 distributed at different altitudes and in over 30 municipalities. Not everything that has been discovered is currently visible because archaeologists, in order to protect and preserve this heritage as long as possible, after having conducted the appropriate investigations, let the vegetation cover and therefore naturally protect such beauty.

Noteworthy is also the museum of the Prehistory of Val Camonica, where there are other engraved rocks and various archaeological finds found during the excavations and the National Archaeological Park in  Cemmo.

There are eight parks that make up the entire heritage of rock engravings. In the locality of Naquane, there is the first Italian archaeological park dating back to 1955. With a pleasant walk in the woods, you can reach the large rocks on which the man of prehistory has left traces of his creativity. Immersed in a beautiful forest of fir, chestnut, and birch trees, you can admire 104 rocks with engravings. The rocks are marked with a number and signs. You can see engravings relating to men, animals, images of everyday life, symbols, and representations of the spiritual world. The Archaeological Park in Cemmo is the most recent, established in 2005.

The Serandina-Bedolina Park is famous for the presence of the Camuna rose, the symbol of the Lombardy Region. Also in this case the scenery of the mountains and the valley creates a great suggestion that increases the emotion of being able to see a map of the prehistoric era. The visit to the parks of the engravings is a perfect union between a walk in nature and a sensational discovery of a very distant time.

It is worth stopping to admire two really interesting churches. The parish church of San Siro is located near Cemmo and can be reached with a short walk. Part of the building is leaning against the rock and the optical effect is of great impact. The style is Romanesque and the legend would even link it to Charlemagne. The entrance portal and the internal frescoes are very interesting. The windows located in the rear part of the church allow you to see the beautiful valley in which the Oglio river flows. The Romanesque-style monastery of San Salvatore is located on the opposite side of the river. The religious building is made up of large stones, but inside and outside numerous decorations make it lighter.

Edolo is one of the northernmost municipalities of Val Camonica. The historic center has numerous religious and secular buildings; the main church represents one of the most valuable elements. Equally interesting are the “turret” buildings of the historic center, on some of which ancient coats of arms are visible, while the current Town Hall has more modern forms.

In the upper Val Camonica, nestled between two valleys, Val Paghera in the Adamello Regional Park and Val Grande in the Stelvio National Park, the town of Vezza d’Oglio offers an enchanting panorama capable of surprising tourists at any time of the year.

About 20 km from the inhabited area you arrive at the imposing Pietra Rossa glacier (3212 m), crossed by the stream of the same name. From here, you can reach the Seroti Lakes, in the Bighera Valley: seventeen alpine lakes of various shapes and sizes.

If you want to stay in town, there is no shortage of cultural attractions. The Parish Church of San Martino and the Church of San Clemente, one of the oldest in the valley, which was originally a hermitage and hospice intended for pilgrims, are certainly worth a visit.

In Borom, a hamlet of Vezza d’Oglio, there is the White Marble Quarry, a site of archaeological and historical interest valued by the artists, called to participate annually in the Sculpture Symposium.

Vezza d’Oglio was the scene of one of the battles of the Third War of Independence, where on 4 July 1866 a regiment of the Italian army repulsed the Austrians. In memory of the Battle of Vezza, the Garibaldino Civic Museum was built, which houses an exhibition of historical objects.

Among the museums of the upper Val Camonica, one cannot fail to mention the Temù White War Museum, the most important in Lombardy and Italy among those dedicated to the Alpine war front in the First World War, where hundreds of objects recovered are exhibited. In addition to the numerous photographs that accompany the visitor, it is possible to see the wooden sleds for transporting ammunition, grenades found among the glaciers, and cannons transported up to 3000 meters high.

Of great historical interest is also Vione, known for the recent findings of Lombard tombs.

The itinerary in the upper Val Camonica can be concluded with a visit to two municipalities. The first one is Incudine, where you can admire the Via Crucis in the church of San Bernardino and a Last Supper in the parish church of San Maurizio.

The second one is Monno. This nature trail is ideal for a bicycle ride. Monno rises in fact along the road that leads to the famous Mortirolo pass, one of the classic passages of the Giro d’Italia (the Tour of Italy is a famous bicycle race held in Italy); for this reason, it is a very popular location for more experienced cyclists. Interesting to visit is the parish church of San Pietro and Paolo in Baroque style, containing an altarpiece by Palma the Younger “Madonna with Child and Saints”. Also worth a visit are the Church of San Sebastiano and Fabiano with a wooden Madonna with Child in Nordic style from the 15th century and the Oratory of San Francesco.

Another town  to visit in Val Camonica is Castello di Breno, a small town rich in history. On the top of its hill, 120 m above the town, stands a medieval castle. Born mainly in 1100 as a complex of palaces and towers, it will then be transformed into a military stronghold during the period of the Republic of Venice in the 15th century. Inside there is also a medieval church, today the oldest monument in Breno. From the castle walls you can admire a splendid panorama.

Ponte di Legno is the most important ski resort in Val Camonica, very popular also in summer by mountain lovers. The town center is beautiful with the fountain and the main street with shops and cafes. The castle of Poia, a private residence, is also interesting. Also worth visiting is the Parish Church of the Holy Trinity and the Church of Sant’Apollonio, in the locality of Plampezzo. You can take pleasant walks in Val Sozzine, Vescasa, La Valle delle Messi. From this location, you can reach the Gavia Pass and the Stelvio Pass among the most beautiful stages of the Giro d’Italia.

Pisogne is a splendid place on the shores of Lake Iseo, rich in history and culture: to see the Church of Santa Maria della Neve; the church of Santa Maria Assunta which, among other things, is the largest parish church in Val Camonica; also interesting is the Bishop’s Tower which dominates the town with its 30 meters high. Do not miss a walk in Damioli Park with numerous cedars and redwoods.

Lake Moro is a small alpine lake, surrounded by woods and mountains, located among the hills and divided between the municipalities of Angolo Terme and Darfo Boario Terme. A village made up of just over a dozen houses stands next to it. It is during the summer, however, that the lake comes alive, becoming the main destination for many tourists looking for recreation. Noteworthy is the path that borders the lakeshore, with thematic stops and a beautiful landscape.

The town of Sonico is also located in Val Camonica, near Edolo. Among the main attractions of the town are the 16th-century church of San Lorenzo with a beautiful Renaissance bell tower and the baroque style church of Sant ‘Antonio di Rino, where an 18th-century fresco is preserved. Also interesting is the parish church of Santa Maria of the eighteenth century with internal stucco decorations. Finally, the Sanctuary of the Madonna della Pradella is also worth a visit, with the oldest bell in Val Camonica. The structure of the ancient town is interesting, with the tower house of the Federici family.

Cividate Camuno is a small town of Roman origin that rises on the banks of the Oglio river, on a plain bordered by a spur of rock. The medieval tower stands in the town and the Roman amphitheater, on the edge of the town, is a place of interest that is certainly worth a visit. The archaeological museum of Cividate Camuno also houses several finds of historical importance, including the statue of Minerva found in the sanctuary of Minerva in Breno and the recently discovered Virile statue.

Breno is one of the most important towns in Val Camonica. The Town Hall building houses the Library and the Civic Museum. Going along via Cappellini, you reach the church of Sant’Antonio, now an exhibition site. From via Tonolini you arrive at a small square where the parish church of San Salvatore is located, built in the 17th century, with a bell tower from 1673.

Not far from Sant’Antonio Square is Generale Ronchi Square, a marketplace surrounded by 18th-19th century buildings. From this square, you can reach the medieval castle.

To complete the visit of Val Camonica, a walk-in Bienno is a must. Considered one of the most beautiful towns in Italy, it is characterized by narrow alleys full of details and well-preserved ancient houses. The town is famous for wrought iron and still today it is possible to enter the historic forges dedicated to ironworking and admire the ironworkers who, with techniques handed down from generation to generation, create their works of art.

The thermal baths of Boario

Val Camonica is also an ideal place for health and well-being and can count on numerous sources of thermal water for body care. The thermal baths of Boario have been an important reference point for tourism in Val Camonica since the 1700s when the thermal activity began. You can take a walk in the Thermal Park, a quiet and uncontaminated place. Or dedicate a day to the wellness path of the SPA. The precious thermal waters of Boario Terme are used for mineral water treatments, inhalations, mud therapy, balneotherapy, physiotherapy, and massage therapy.

How to Get to Val Camonica

Val Camonica is easily accessible by train. From the central station of Milan, with the trains of the Trenord or Trenitalia railway lines, you can reach the Brescia railway station from which you can access Val Camonica via the Brescia-Iseo-Edolo railway line. By car, take the Brescia exit and continue in the direction of Lake Iseo along with the SP BS 510 highway. The closest airports are Bergamo – Orio al Serio (90 km) and Verona (110 km).