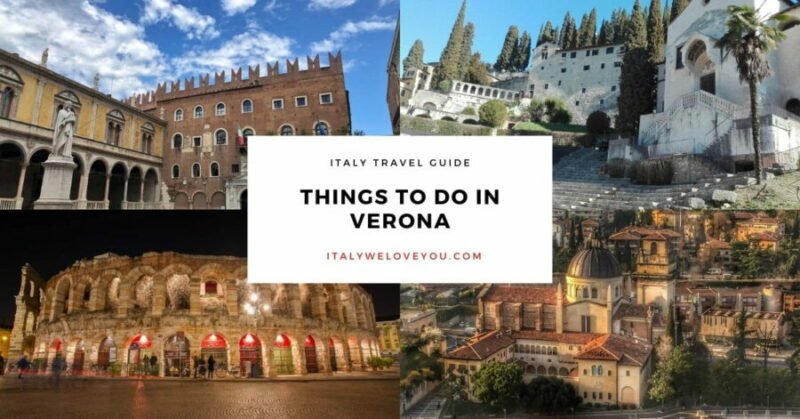 Verona is a charming city with a unique historic center, declared a World Heritage Site by Unesco for its architecture and urban structure, for its bridges over the Adige river, the wonderful palaces, and squares, the spectacular Arena. Without forgetting the romantic story of Romeo and Juliet.

The city offers a rich choice of museums, shopping streets, shows, and other things to see: a concentration of artistic, historical, and cultural testimonies immersed in the suggestive atmosphere of alleys and squares, completed by the flavors of traditional cuisine.

Verona is easily accessible by any means of transport: the Verona-Villafranca Airport (just 12 km from the city center) is well connected to Italy and Europe. Verona is also a good starting point to explore Veneto by train or by renting a car to discover the other cities of art in the region.

Best Things to do in Verona

We begin our visit to the city from Piazza Bra (Bra square), the beating heart of Verona and one of the most popular places. The square is large and majestic, with the Arena in the center. On one side there is also the Gran Guardia, a building dating back to the seventeenth century, which today hosts exhibitions and conferences. Another building of great beauty is Palazzo Barbieri, built in the nineteenth century and today the seat of the Municipality of Verona.

In Piazza Bra there is also the “liston”, the pink marble pavement, the same used to build the Roman Amphitheater. On the “liston”, people love to meet, walk and chat, before sitting at the tables of the bars for a coffee or an aperitif.

The Arena of Verona

The Roman Amphitheater, better known by the name of “Arena”, is the symbol of the city, and the first thing that tourists choose to see as soon as they arrive in the city. Built around the first century, the Arena, like all amphitheaters, hosted gladiator shows.

The Arena attracts millions of visitors every year, not only for its beauty and history but also for the important events and concerts it hosts. The Arena can host around 20,000 spectators thanks to its elliptical shape. Among the events, do not miss the famous Opera Festival, which every summer transforms the Arena of Verona into the largest open-air opera theater in the world. For years now the Arena also hosts light music events of national and international importance. In all cases, the difference is made by the exceptional acoustics and the more general feeling of wonder that pervades this monumental space.

Piazza delle Erbe is the oldest square in Verona, surrounded by medieval buildings and in the center a colorful fruit and vegetable market.

It is the place where you can best grasp the most popular and lively side of the city, without renouncing the cultural aspect of the holiday. During the market, on Saturdays and Sundays, it is the living room of the city, where people of Verona meet to shop or for the evening aperitif ritual. The Palazzo del Comune, the Torre dei Lamberti, the Casa dei Giudici and the Mazzanti houses overlook the square.

Among its monuments there is also the famous “Madonna Verona”: a medieval fountain surmounted by a statue of the Virgin. The Torre dei Lamberti, with its 84 meters in height, is the tallest tower in the city and dates back to the XII century, but was only completed in the following centuries. The clock was added in the XVIII century. There is the possibility of climbing to the top and enjoying the panorama of the city.

The tragic love affair of Romeo and Juliet took place in Verona, immortalized by the story of William Shakespeare. Juliet’s house, by far the most visited place in the city, is located in the historic center, just over 100 meters from Piazza delle Erbe, in a XIII century building with a beautiful Gothic-style portal. In the inner courtyard you can see a bronze statue of Juliet and the famous balcony that saw the love between the two young people. Juliet’s house is a must, even if very touristy, for anyone who wants to discover the places that inspired this love story. Juliet’s tomb is instead located in an ancient XIII century convent of Capuchin friars, in Via del Pontiere, 35.

Piazza dei Signori is a beautiful square surrounded by monumental buildings connected to each other by arcades. In the center of the square is the large statue of Dante who found refuge in Verona immediately after his exile from Florence. You enter the square through the Arco della Costa and  you find the facade of the Domus Nova on the left. Continuing you meet the Loggia del Consiglio and the Palazzo degli Scaligeri, Lords of Verona from 1260 to 1387. The Palazzo del Capitanio follows with the corner tower overlooking the square, connected by an arch to the Palazzo della Ragione. The arch leads to the courtyard of the Mercato Vecchio (Old Market) with the splendid Scala della Ragione: this staircase, built in red marble, connects the courtyard of the Mercato Vecchio, which opens in the center of the palace, with the large portal on the main floor.

The Arche Scaligere, a few steps from Piazza delle Erbe, are monumental tombs, richly decorated with spiers, pinnacles and statues, dedicated to some representatives of the Scaligeri family, who reigned for a long time in Verona. The impressive funeral complex, an extraordinary example of Gothic architecture in Italy, can only be visited from June to September.

The bridges of Verona

The Adige river crosses Verona: the bridges, therefore, have always played an essential function for the city. The oldest of all is the Ponte di Pietra (Stone Bridge), from Roman times which still connects the Roman Theater with the city center. The other representative bridge is the Scaliger one, right in front of Castelvecchio, built in the second half of the XIV century. This bridge is 120 meters long and was erected to ensure an escape from the city. Destroyed by the Germans during the Second World War, the bridge was rebuilt with the remains of the stones recovered in the Adige. The bridge in question has become one of the most popular and photographed attractions in Verona.

Located on the banks of the Adige river, there is Castelvecchio, the castle of Verona built in the XIV century as a fortress against external dangers that could come from the bridge, but also against possible population uprisings. The structure is divided between the large courtyard and the Scaligeri Palace, where the lords lived. In the center, the high tower which leads to the Scaliger Bridge on the Adige. Today Castelvecchio houses a museum with works of medieval, Renaissance and modern art.

To reach the Roman Theater you have to cross the Ponte Pietra, the oldest in the city. The theater, or rather what remains of it, is located on Colle San Pietro, just over 100 meters high. It is worth reaching the place for the wonderful glimpses it gives and, of course, for the archaeological importance, it holds together with the attached museum, which is accessed via a staircase. During the summer, the site becomes a place for outdoor shows and events.

Hidden among the buildings, the Cathedral of Verona was consecrated in 1187 and dedicated to Santa Maria Matricolare. The structure is in Romanesque style, but the church was deeply remodeled in the Gothic and Renaissance periods. Inside is the famous Altarpiece of the Assumption by Titian. From the Cathedral it is possible to access the baptistery of San Giovanni in Fonte, a church from the Lombard period in which there is a baptismal font entirely carved in marble.

The Church of San Zeno Maggiore is one of the most important examples of Romanesque architecture in Italy and the current appearance dates back to the XII century. In addition to guarding the body of San Zeno (bishop of Verona who lived in the 4th century AD), the Church is rich in sculptures and paintings from the XII to the XVI century, including the altarpiece “Madonna with child between angels and saints” made by the famous Andrea Mantegna between 1457 and 1459.

Verona has a long culinary tradition. Among his most famous dishes, we mention the “gnocchi”, a classic of Veronese cuisine. The dough is prepared with white flour, potatoes and eggs. The dressing obviously changes, from the sauce to the sugar and cinnamon. The “pearà”, boiled beef with grated bread sauce, broth, ox marrow and plenty of pepper. The “pastissada de caval”, a horse meat stew that accompanies the gnocchi. The “paparele”, tagliatelle with peas and beans. Also try the “Renga de Parona” of Verona, based on anchovies. Among the desserts, there is the “Pandoro”, known all over the world. Pandoro is the typical Veronese sweet for Christmas. Soft, cone-shaped trunk with star-shaped reliefs usually with eight points. It has a delicate flavor and a smell of vanilla, an intense golden color and is served with a sprinkling of icing sugar. Created at the end of the 19th century, it derives from the “Pan de Oro” (golden bread) which was served on the tables of the rich Venetians since the Middle Ages and which the Veronese ate at Christmas. The pandoro was officially born in 1894, from the idea of ​​the pastry chef Domenico Melegatti.

It should not be forgotten that Verona is also famous for the production of wines, such as Bardolino wine of Valpolicella.

Where to stay in Verona?

Verona welcomes a large number of tourists every year. Hotel prices are on average high and it can be difficult to find a cheap room in spring or summer, or during the Christmas holidays and during musical events at the Arena. Here are some tips on the best areas to sleep.

The historic center of Verona is the best place to sleep for those who want to stay close to the main attractions of the city, moving comfortably on foot among shopping avenues, squares full of cafes and restaurants, markets and historic churches. In this area housing is generally more expensive; there are also more difficulties in finding a parking space, so it is preferable to choose this option if you arrive by train.

The San Zeno neighborhood, which extends around the Basilica of the same name, could be a good alternative for those looking for a cheaper and quieter accommodation solution while not straying too far from the center. On foot, it takes about 15 minutes to get to Piazza Bra or alternatively there are several bus lines to get closer to the historic center in a more comfortable way.

On the opposite bank of the Adige river, outside the city center, we have the districts of Borgo Trento and Valdonega, ideal for those looking for a more peaceful and economical solution.

Borgo Trento is a residential neighborhood a stone’s throw from the center. Keep in mind, however, that in the evening the neighborhood does not offer much social life. Valdonega is another quiet and residential area with many green areas, which is located north of the historic center and extends over a hill that offers beautiful views of the city. Also from here the center can be reached with a nice walk.

The small neighborhood of Veronetta is the university area of the city, populated by many young students. Also in this case, the area is convenient to reach the center on foot or possibly in a few bus stops, and at the same time, you have the possibility to save both in accommodation and in food because the area has many clubs, taverns, and restaurants frequented by university students.