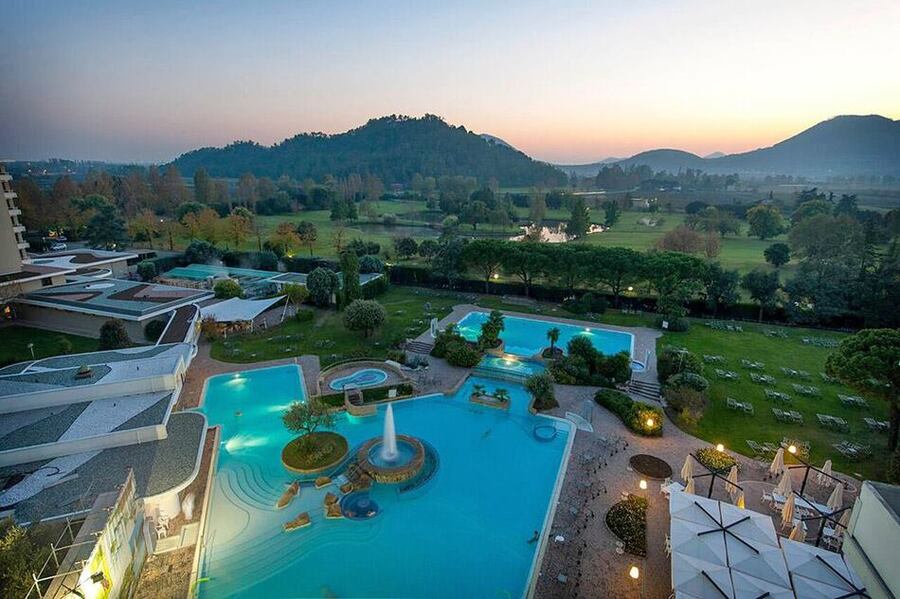 Abano Terme is a town located in the province of Padua, in Veneto, along the northeastern edge of the Euganean hills. Abano Terme is one of the largest spas in the world. A holiday in this town, but also a simple day of relaxation, allows you to discover, in addition to the thermal pools, spas, and wellness centers, also historic towns, sanctuaries, rolling hills, and natural oases. In fact, there are many things to see in Abano Terme, not only in the center but also in the surrounding area. 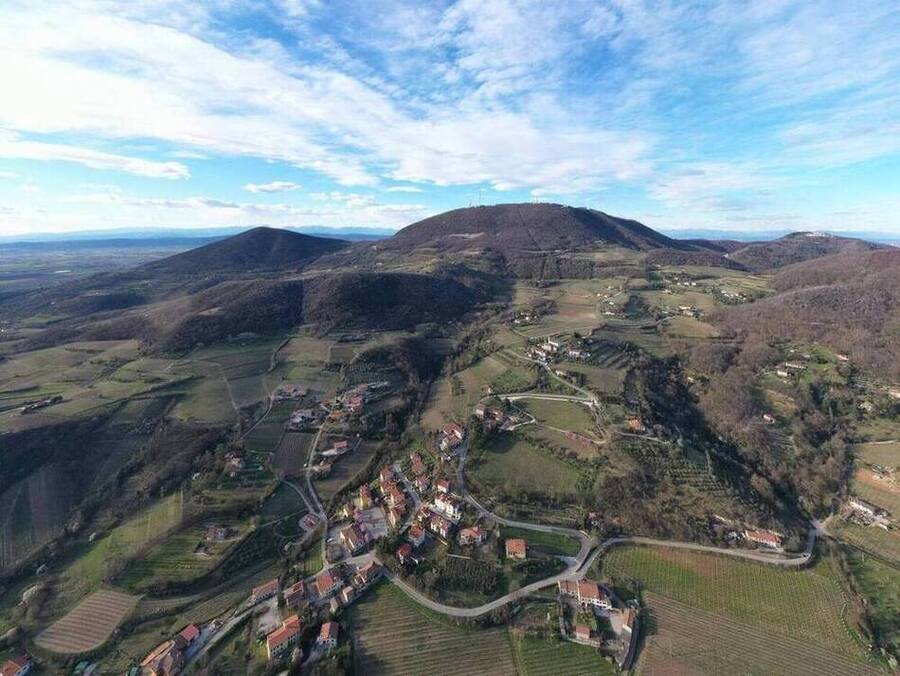 The Euganean Hills are reliefs of volcanic origin that dominate the Venetian plain. Characterizing them is the presence of natural hot water springs, which over time have been used for beneficial purposes in spas and hospital shelters. The thermal water comes from the Pre-Alps, in particular from the Lessini Mountains, with an underground journey of about 100 km and in this period they are enriched with different mineral salts, reaching a temperature of about 70-90 ° C before rising to the surface.

Abano Terme is the fulcrum of the Euganean Spas, which also extends to the towns of Montegrotto, Battaglia, Galzignano Terme and Teolo.

The therapeutic properties of thermal water date back to Roman times. At the time, boiling and sulfurous springs of thermal spring water gushed out spontaneously. There is no main health establishment in Abano. Each of the 100 wells is vented into the land of each individual hotel, which is entrusted with exploitation by the State property.

The toponym of Abano derives from the Greek “Aponos”, which means “without pain”. The waters of Abano, according to legend, became hot when Phaeton, son of the God Apollo and conductor of the Chariot of the Sun, fell into it after being struck by the lightning of Jupiter, who wanted to stop its run. Legend aside, for centuries the thermal waters of Abano have been exploited for their extraordinary healing and regenerating properties.

Abano is easily reachable by train from Padua. In fact, from the square of the central station of Padua, extra-urban buses depart every twenty minutes to reach Abano Terme. Each ride to Abano Terme takes about half an hour. Via delle Terme is the most important street of the town, full of shops, bars and restaurants that culminates in the square in front of the neoclassical facade of the former Grand Hotel Orologio and the Arlecchino Fountain, consisting of a circular basin with 2 statues. This is the most photographed attraction in Abano. Right next to it you will also notice the long fountain, also a symbol of the town.

The link between Abano Terme and water, the true wealth of the spa town, is manifested by the presence of numerous fountains. Among those worthy of a stop is the fountain in Piazza Cristoforo Colombo, named after the discoverer of the New World and built-in 1956. In the beautiful Piazza del Sole e della Pace, you can admire one of the largest sundials in Europe, the work of the astronomer Salvador Condè. The sundial consists of a horizontal part, on the ground, and a vertical part, the gnomon. In this square it is also possible to admire the statue of Pietro d’Abano, a friend of Marco Polo and who lived between 1200 and 1300. 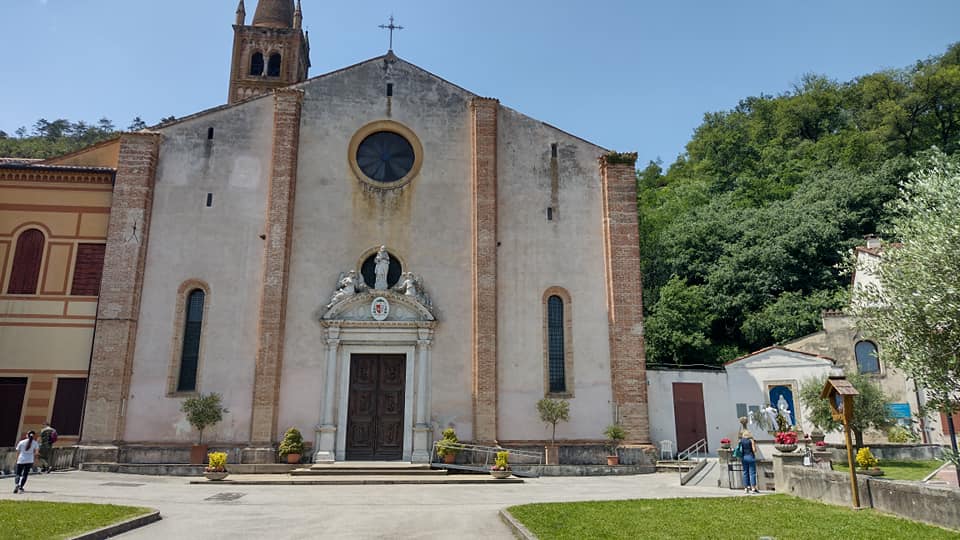 Another particularly visited monument in Abano Terme is the Church of the Beata Vergine della Salute. The late medieval structure was erected after the apparition of the Madonna during a terrible plague. According to legend, the construction of the church sanctuary stopped the pestilence and the spring waters allowed many people to heal. From that moment the Church was a pilgrimage destination for the beneficial healing properties of the nearby springs of Abano Terme. 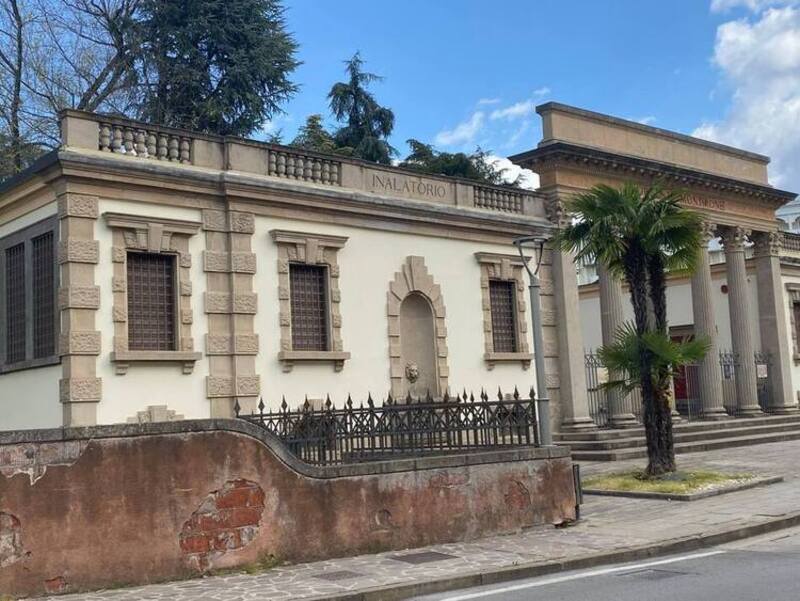 The Montirone park is one step away from the pedestrian area of ​​Abano Terme, with monumental access surmounted by columns built by Giuseppe Jappelli in 1825. It probably represents one of the first historic thermal baths in Abano. Little known, it represents an important point of historical interest for the remains of a Roman aqueduct that are found inside. The Roman aqueduct of Abano Terme is one of the most popular monuments for those visiting the towns of the Euganean Hills. In ancient times this structure carried water from the springs of the Euganean Hills to Vicenza.

In the past, the Montirone hill was a very popular thermal park, fed by springs that flowed naturally at a temperature of 80 ° C. Frequented by the richest and most powerful families of Padua and its surroundings, the Montirone thermal park was surrounded by sumptuous villas and prestigious noble palaces, some of which still exist. In fact, from Piazza Fontana to the Montirone Gardens you will walk alongside the most beautiful ancient buildings of Abano Terme, a memory of a not too distant past made up of splendor and prosperity. Among these, do not forget the Grand Hotel Orologio, which belonged to the noble Dondi dall’Orologio family. It was the famous architect Giuseppe Jappelli who gave the palace its splendid neoclassical facade. 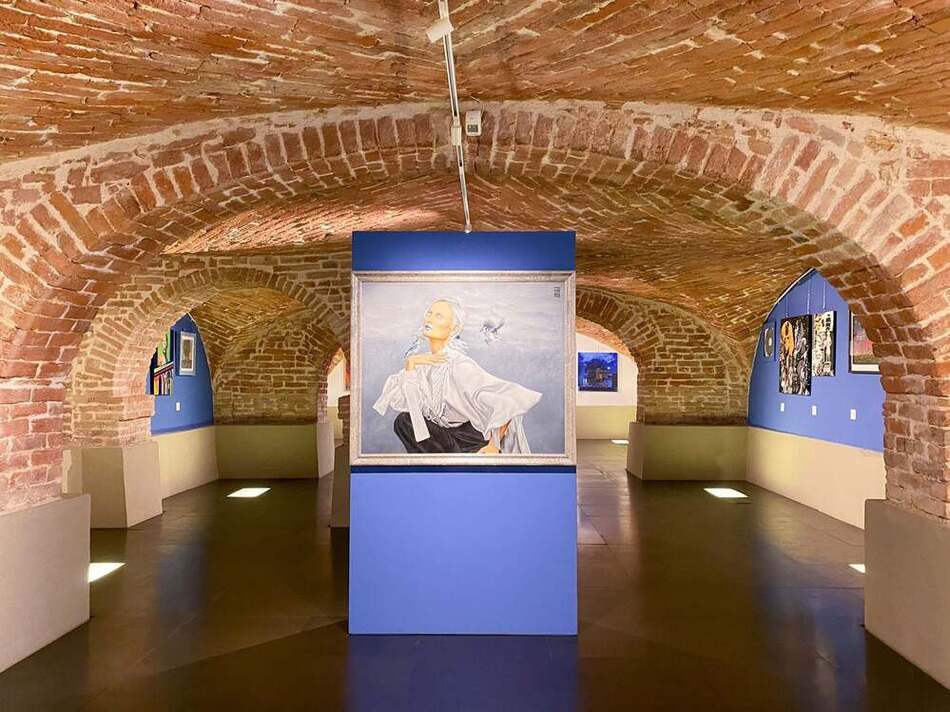 Villa Bassi Rathgeb is a sixteenth-century palace that also belonged to the Dondi dell’Orologio family. The manor house dates back to the 16th-19th century, but the beautiful Venetian villa also includes an 18th-century garden and an 18th-century church. The frescoes by Antonio Buttafuoco date back to the end of the 1700s. The villa now belongs to the Municipality of Abano Terme which has converted it into a museum that houses paintings, drawings and miniatures from the Roberto Bassi Rathgeb Collection; is an exciting immersion in Lombard-Venetian painting and art.

Next to the entrance to the Montirone gardens, there is also the Municipal Gallery of Contemporary Art. Admission is free. 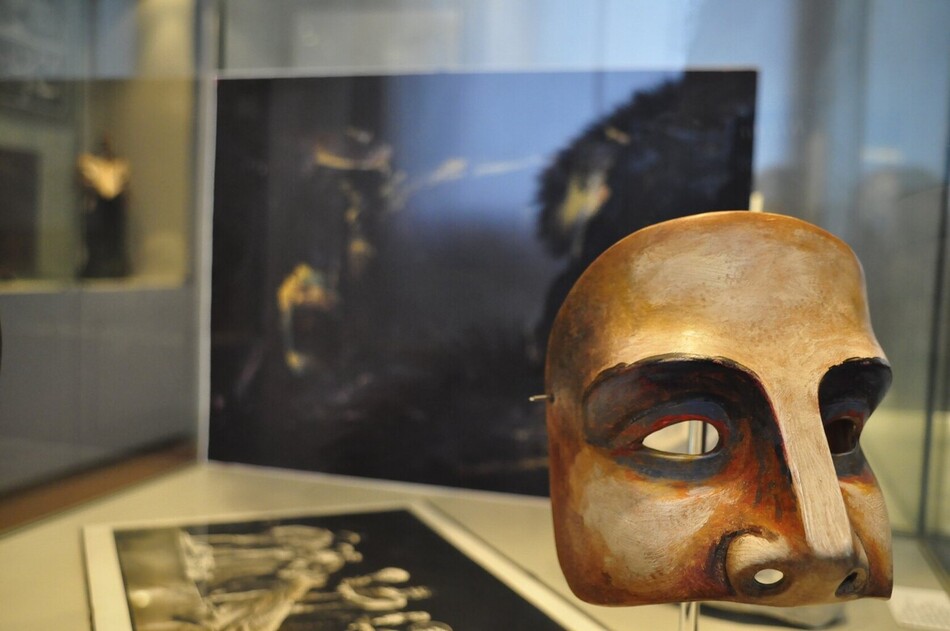 Among the things not to be missed in Abano Terme is the International Mask Museum where the works of Amleto and Donato Sartori, masks for comedy of art and theater are exhibited. The museum is housed in the eighteenth-century Villa Trevisan Ravioli. 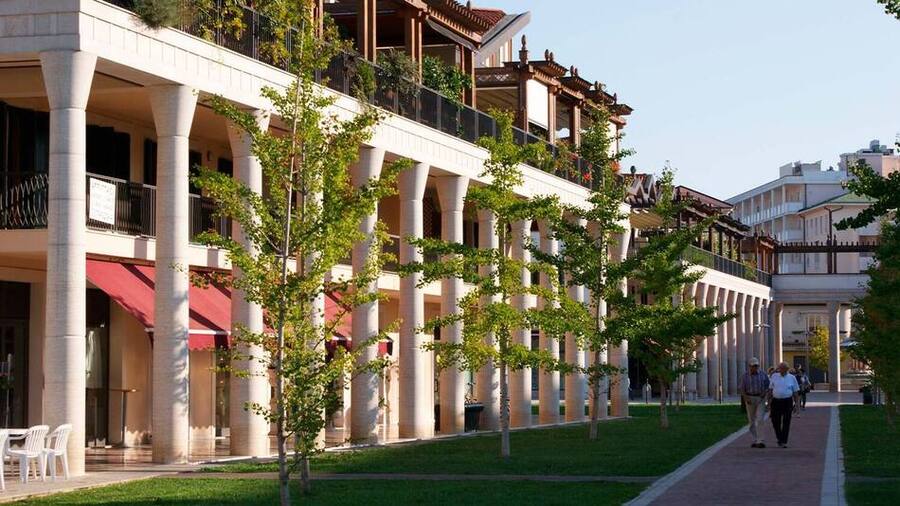 In the modern area of the city we find the Urban Thermal Park of Abano Terme, whose architecture is the work of Paolo Portoghesi. The spa complex is a green area that extends for 3 kilometers without interruption. Inside, five buildings of Palladian architecture, shops, offices, cycle paths and, again, fountains, monumental columns, benches, paths, and hundreds of tall trees that adorn the entire park.

Over time, splendid patrician villas were built outside the historic center, many of them in Palladian style. These beautiful architectures, to be seen on the Euganean hills, are exclusive places often used as wedding locations. 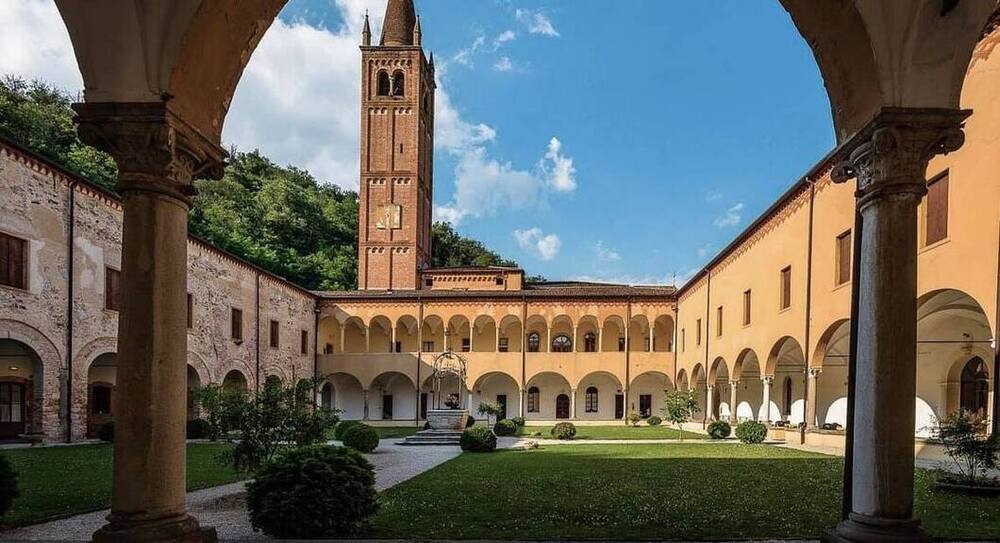 Outside Abano it is also possible to visit the Sanctuary of Monteortone; it is located close to the hill of the same name, in an elevated position. The origin of the Sanctuary dates back to 1428. The tradition says that a soldier, Pietro Falco, retired in prayer in this place and saw the Madonna, who promised him the healing of old wounds in his legs if he bathed himself with water from a nearby source. Miraculously healed, the soldier found among the stones a painted table depicting the Virgin with the Child Jesus. As news of the miracle spread, an increasing number of devotees began to visit the locality. Today the Sanctuary looks like an imposing construction with three naves, a Latin cross, with a facade in which a large baroque portal in white stone, a work of 1667, stands out. There is a high and elegant bell tower in a Gothic style characterized by a spire roof on the back. The interior of the Sanctuary is rich in frescoes and houses a beautiful cloister, with an original 16th-century well. Currently, the building, no longer linked to the sanctuary, is a spa hotel managed by priests.

A short distance from Abano Terme there are also other characteristic towns such as Este and Montagnana, both famous for their almost perfectly preserved medieval fortifications.

Two other places not to be missed near Abano Terme are the Abbey of Praglia, a jewel of the 11th-12th century, and the monastery of San Daniele, dating back to the 11th century. On the top of a small hill is the monastery of San Daniele which can be reached with a short walk from Abano Terme and which offers a wonderful panoramic view. It is an oasis of peace and tranquility. The small church welcomes visitors for a moment of meditation and prayer while the rooms of the former Todeschini villa accompany them on an evocative journey into the recent history of the building. The construction of the Monastery of San Daniele dates back to the years 1076-1079. Initially entrusted to a community of Benedictine monks, the building passed at the end of the 15th century to the Canons Regular of San Salvatore who resided there until 1771, when it was bought by the Todeschini family of Venice. Since 1948 the ancient monastery has returned to being a house of prayer, hosting a community of Benedictine Nuns from the city of Rijeka. Inside the church, we find a fresco in the dome representing San Daniele, the work of Corradini. The bas-relief on the block of white Verona marble depicts the martyrdom of the saint. Even today, on January 3, the solemn memory of San Daniele is celebrated in this church and in the diocese of Padua. Also by Corradini are the four white stone statues in the niches at the corners of the church, depicting the four evangelists. The side altars, on the other hand, built in 1716, are embellished with two paintings depicting the Nativity, attributed to Palma the Younger, and the Madonna offering the Child Jesus to St. Anthony. Other paintings enrich the apse. In the center San Daniele, by an unknown artist. On the sides, two late 19th century canvases, works by painters from beyond the Alps, from the monastery of Rijeka: on the right the Transit of San Benedetto; on the left, San Rocco. Finally, various plaques on the internal walls of the church recall the history of the noble Bonomi-Todeschini family.

The most important place of spirituality in the Euganean Hills is located a few kilometers from Abano Terme. This is the Abbey of Praglia, one of the largest monastic complexes in Italy and can be visited with a guided tour to discover its cloisters, libraries and refectories. Dedicated to the Blessed Virgin Mary of the Assumption, it is the heart of the monastery and of community life. The monks gather there several times a day for liturgical prayer. The current building was built between 1490 and 1550. Located on the first floor, the hanging cloister is supported by four vaulted pillars set directly on the rock. It acts as the central point of the entire monastic complex and connects the various rooms intended for community life: the chapter house, the refectory, the belvedere loggia, the double cloister, the library, the church. The botanical cloister was instead used in the past for the cultivation of medicinal plants for the pharmacy; now it looks like an Italian garden. It is the cloister of the concierge, a symbolic place of hospitality and of the multiple relationships between the monastery and the outside world. The monumental refectory of the sixteenth century makes this place one of the most elegant of the monastery: it has an entrance portal with the two washbasins, the pulpit for reading, prescribed by the Rule during meals, the large fresco of the Crucifixion by Montagna (about 1490 ), the splendid wooden furniture in walnut and briar, the tempera canvases arranged along the walls depicting biblical scenes. Right in the heart of this millenary medieval monastic settlement, an important restoration site then brought to light the grandiose spaces of the ancient water cistern or “Venetian well”. In the silence of these walls the white and red wines are refined. In almost a thousand years of history, the vine and wine have been a source of livelihood and a vocation for the Abbey. Finally, a shop cannot be missing in the Abbey where you can buy the products made by the monks, including their famous wine.