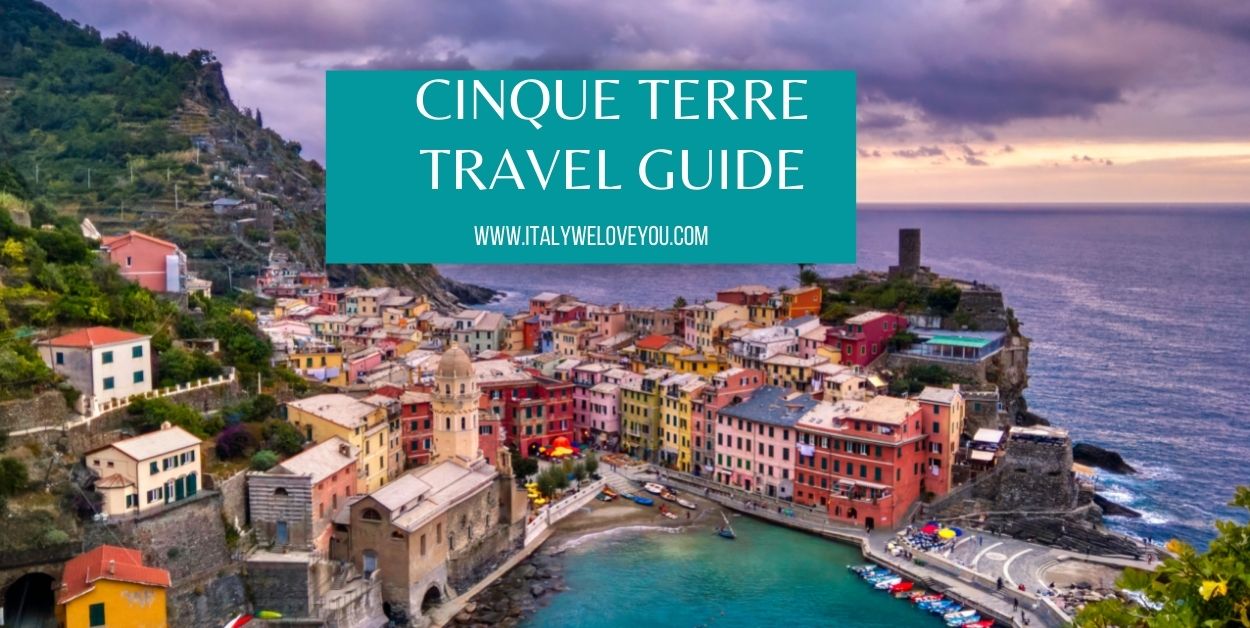 Cinque Terre is a fascinating area in northwest Italy, in the Liguria region, which includes five towns: Riomaggiore, Manarola, Corniglia, Vernazza, and Monterosso. Belonging to the UNESCO World Heritage List since 1997, the Cinque Terre is among the most beautiful landscapes in the Mediterranean. The coast of the Cinque Terre is rocky and steep, but it is also full of enchanting bays, beaches and wonderful panoramic paths to be discovered. The hinterland then hides beautiful medieval towns, characteristic churches, craft shops, and typical dishes all to be enjoyed. Here man has “modified” the natural environment by terracing the steep slopes of the hills to obtain strips of arable land, supported by kilometers of dry stone walls. This is the aspect that distinguishes the Cinque Terre and has made it a World Heritage Site.

Visitors are enchanted by the beauty of its five colorful villages, each with its charm, that rise up facing the sea. The small towns lived for a long time in almost total isolation due to their conformation and therefore maintained their integrity, the same as that which they had under the dominion of the Republic of Genoa. The small alleys climb towards the vineyards hanging on the steep walls behind the towns and houses – which are grouped together – are reminiscent of the architectural style of Genoa.

The town of Levanto, being very well connected, offers a valid starting point for visiting the Cinque Terre. To visit the five small towns, we recommend that you take the train at Levanto station: the train stops in each town and the journey takes between 25 and 30 minutes. Trains have a good frequency, especially in high season and throughout the year (every 40 minutes). From April to October, it is possible to use the boat with two daily departures at 10 and 14, the return is at 18.30

Cinque Terre can be visited in many ways. On foot for hikers through paths that connect the five towns. By train (which is what most people do) that runs along the coast and stops in each town(€ 10 for a ticket that will be valid all day). Or by boat, which will allow you to have a magnificent view of the cliffs and towns along the coast. Whichever option you choose, the views are breathtaking!

It takes at least 2 or 3 days to visit Cinque Terre. If the easiest way is to do it by train, it is with the excursions that you can see more, passing through roads and mountains dotted with vineyards and olive trees. Manarola is one of the most beautiful towns in Cinque Terre. Thanks to its typical ” tower houses, ” it has ancient origins and is a real urban planning jewel, thanks to its typical “tower houses”. The structure of the city is surprising because the base of the town is located near the sea and from there the houses seem to climb the hill to completely cover the promontory overlooking the sea. Unique panoramic views open up from the rocky promontory of Punta Bonfiglio. You will find in Manarola the splendid Gothic church of San Lorenzo which dates back to the mid-14th century. Its panoramic balconies are famous throughout the region: unforgettable sunsets can be enjoyed from Piazza Castello as well as from Piazzetta De André. In Manarola also begins the famous “Via dell’amore” (“Path of love”) which continues towards the town of Riomaggiore. The path is 12 km long and represents one of the most famous attractions in the world.  It is subject to charges. The only town in Cinque Terre that is not in contact with the sea is Corniglia which stands on a rocky promontory one hundred meters above the sea, from which the view is breathtaking. At the foot of the promontory, Givano beach embraces the turquoise sea. Corniglia takes its name from an ancient Roman family: Cornelia.

The railway station is located by the sea and to reach the town you need to climb the steep 377 steps. The houses have a slightly different architecture from the other four towns: they are lower and very narrow and revolve around the main road, via Fieschi. Interesting is also the small main square of Corniglia, the real beating heart of the town. Corniglia is surrounded by vines that have made it prosper.

Vernazza is considered the most picturesque town in Cinque Terre. A delightful seaside town that seems to come from a hand-painted picture. Perched on the slopes of a rocky outcrop, steep and narrow streets cross the town to reach the square located in front of the harbor, all protected by the coves that surround it. The main historical monument is the church of Santa Margherita d’Antiochia.

In the past, Vernazza was the most prosperous of Cinque Terre villages, thanks to its strategic importance. It played an important role in the era of the Maritime Republic and the Doria castle is the best testimony of this past prosperity. Interesting is also the Church of San Francesco, now deconsecrated and used as an exhibition center for exhibitions and events.

Nestled on a hill that opens onto a magnificent panorama, the town of Monterosso is the largest one in Cinque Terre. It is divided into two: the historic centre and Fegina. The two areas are connected by a small tunnel only 100 meters long. Many important monuments are to be seen, such as the ancient castle, the church of San Giovanni Battista and the Capuchin monastery.

In the 16th century, Monterosso was fortified and defended by thirteen towers. Today you can find the tower that houses the San Giovanni bell and the Aurora Tower. Nowadays Monterosso is the town with the most infrastructures and it has the largest beach for tourists and boaters.

Geographically, Riomaggiore is the easternmost town and the last village of Cinque Terre. It was a former fishing village and its name derives from the location of the typical towers built along the river (Rio). The landscape is characterized by pastel-colored houses perched in the rock until you reach the castle built above the promontory. Unlike the houses of the other towns of Cinque Terre, those of Riomaggiore are very colorful and are accessible also from the rear. The marina area is a unique sight for the eyes. Here you can also discover monuments of great interest. Above the town, we find the Montenero sanctuary dedicated to the Virgin. This sanctuary located on a hill marks the end of Cinque Terre. Riomaggiore is also the arrival town of the “Path of love”.

Among the dishes and specialties of Ligurian cuisine to try when you are visiting the Cinque Terre we find: Anchovies: rigorously in salt, they have been a traditional dish for over 500 years. Sciacchetrà: a DOC wine made from raisins and produced from terraced vineyards. Lemonita: different from Limonicino, it is a syrup prepared with lemons without zest. Focaccia: stuffed with anchovies from the Ligurian Sea, it is a must. Pesto sauce: another specialty made with basil. Genoese Pandolce: a Ligurian Christmas cake to be found here and in the rest of the region.

With a mild Mediterranean climate, from June to October in Cinque Terre there are on average 20° C. Since the months of July and August are those traditionally stormed by tourists, we highly recommend visiting Cinque Terre in the months of May, June, September, and October.

How to Get to Cinque Terre

As mentioned above, the railway runs along the coast and connects all the towns, all with their own station. Eighteen minutes precisely separate the two most distant towns. Trains run regularly every 10-30 minutes, from 5:00 to midnight. With the 5 Terre Express train you can travel comfortably among La Spezia Centrale, Riomaggiore, Manarola, Corniglia, Vernazza, Monterosso, and Levanto with a single ticket at a single rate. You can buy these train tickets at any station, directly at the ticket offices or at the ATMs. It is advisable to buy the Cinque Terre Card which allows you an unlimited journey on the line between Levanto and La Spezia. The Cinque Terre Card must be validated during the first train journey.

Places to stay in Cinque Terre

It’s not easy to find a place to sleep in the Cinque Terre. The big hotels don’t exist, the average ones don’t exist either: there are mainly very small hotels, apartments, rooms to rent, and bed and breakfasts.
Obviously, given the scarcity, it is mandatory to book well in advance to find a decent bed at a balanced price. In high season, that is during the spring and summer, booking a little in advance means finding little or nothing and having to pay very high prices for non-luxury rooms.