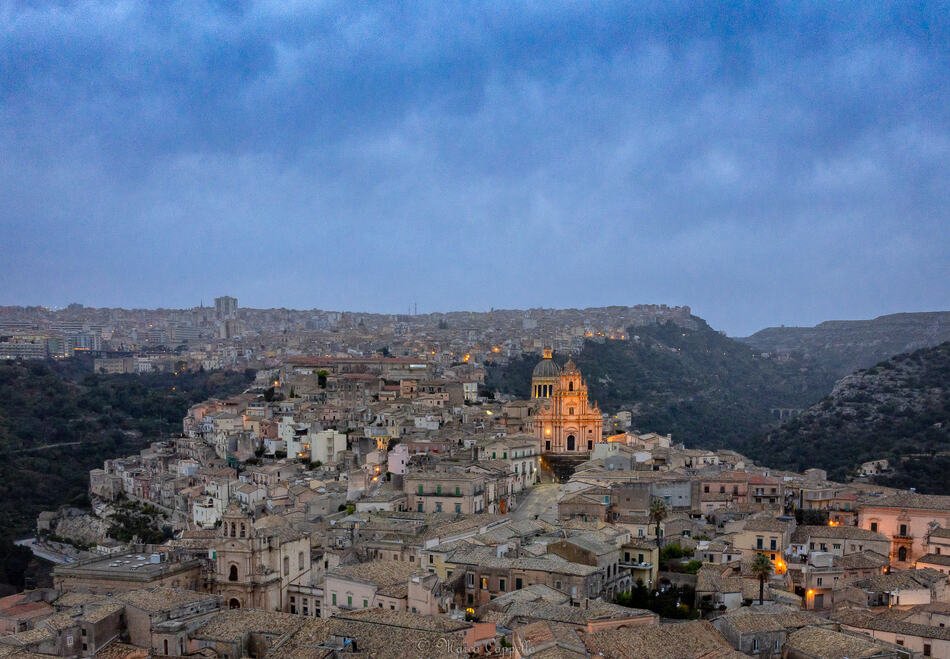 Ragusa, in the heart of Val di Noto, is the southernmost city in Italy and is located in the southeast of Sicily, on the Iblei mountains. Ragusa is one of the destinations that cannot be missed on a trip to Sicily. The city is in fact an open-air museum, a treasure chest of Sicilian Baroque wonders. Taking a trip to Ragusa means discovering a wonderful city made up of more than 50 churches and numerous buildings to be discovered. Elegant and refined, this city amazes for its historic center, characterized by narrow streets and houses that seem to be built on top of each other.

When in 1693 a devastating earthquake caused the collapse of many buildings in the city, these were rebuilt a little higher, forming the part known as Ragusa Superiore (Upper Ragusa). However, the wealthy aristocrats rebuilt the “old Ragusa”, now known as Ragusa Ibla. Although the two cities were divided for a long time, in 1927 they were unified into a single large city with a double face: Ragusa. This makes present-day Ragusa a place with a double personality: Ragusa Ibla (the old city) and Ragusa Superiore.

The three bridges of Ragusa 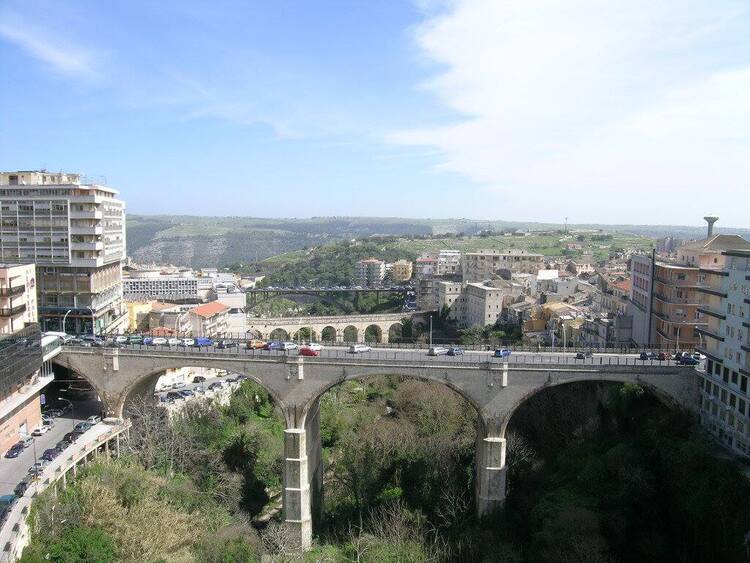 Ragusa is also known as the city of bridges due to the presence of three bridges. The Ponte Vecchio (Old Gate), inaugurated in 1843, is the oldest one in the city. Built-in Roman architectural style, it was intended to connect the San Giovanni district with the city that was developing around the convent of San Francesco di Paola. In the eighties of the last century, it became pedestrian,, while vehicular traffic was moved to the Ponte Nuovo (New Gate), also called “Ponte del Littorio”, opened to the public in 1937. Finally, in 1694 the Ponte Papa Giovanni XXIII, or Ponte San Vito, was completed, which connects the neighborhood del Carmine with that of the Capuchins. The bridges connect the northern part of the city to the southern part and also offer a splendid panorama over the city.

Ragusa should be explored calmly; every alley, building, or street hides a detail to be discovered. Most of the artistic heritage, with the exception of the cathedral of San Giovanni Battista and some eighteenth-century palaces, is located in the old quarter of Ibla. In the Ragusa Ibla district alone there are over fifty churches, most of them in the late Baroque style.

Before entering the old part of the city, it is recommended to visit the Cathedral of San Giovanni Battista which is located in Ragusa Superiore. It was designed in 1760 by two local architects and is rich in Baroque decorations. What strikes the most inside the church are the fourteen columns in Ragusan stone and the floor that alternates stone with white limestone. Along the beautiful and ancient road that descends towards Ragusa Ibla, there is a wonderful staircase of 340 steps that will lead you into an intricate network of streets and alleys. Here you can visit the Cathedral of San Giorgio, one of the most beautiful expressions of the Baroque in the world. The ancient church stood at the city’s eastern end, where the ancient portal still stands. Inside you will find the stained glass windows from 1926 depicting the thirteen episodes of the martyrdom of St. George. 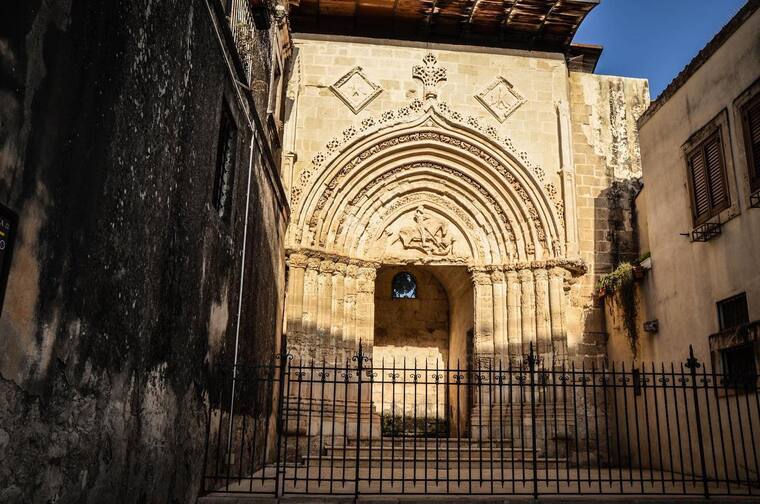 Next to the church is the Portal of San Giorgio, the symbolic monument of the city of Ragusa built in the Gothic-Catalan style in the first half of the 13th century as part of the church of San Giorgio which has now disappeared. 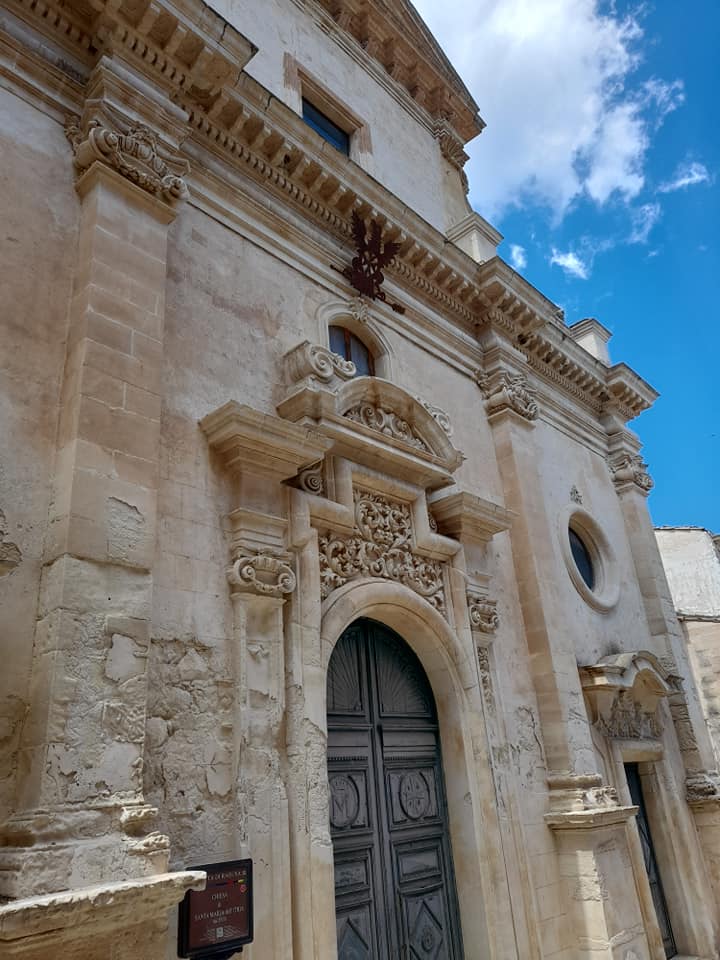 Among the most beautiful places in Ragusa, the blue dome of the church of Santa Maria dell’Itria undoubtedly stands out. An octagonal drum is under the cobalt blue dome with eight terracotta panels decorated with colorful designs. The church is located in the old Jewish quarter of the city and, following the signs for the viewpoint, you can reach a panoramic place of the city. 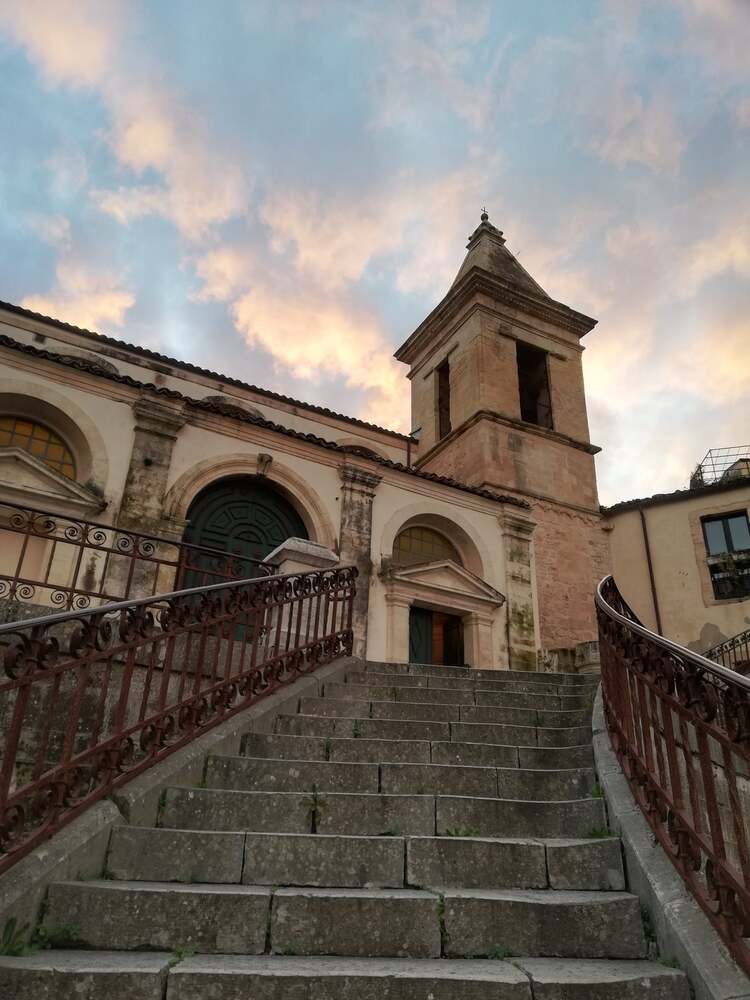 Also, pay a visit to the ancient church of Santa Maria delle Scale which is located between Ragusa Ibla and Ragusa Superiore: it is one of the few examples of Gothic architecture that characterized the city before the 1693 earthquake. so scenic that it is an unmissable stop on this itinerary in Ragusa. From the square in front of the church, you can admire the historic center of the city and the dome of the Cathedral of S. Giorgio. In addition to the numerous churches in Ragusa, you will be able to see elegant and beautiful buildings, such as the Zacco Palace, which is located in Upper Ragusa and was built by Baron Melfi. Today the building is the seat of the Museum of Ragusan traditions.

Schininà di Sant’Elia Palace instead, is the largest palace in Ragusa; it was built at the end of the 18th century by baron Mario Leggio Schininà, the first mayor of Upper Ragusa while the Sortino-Trono Palace was built in 1778 on part of the walls of the ancient castle: from here the view over the valley is wonderful. 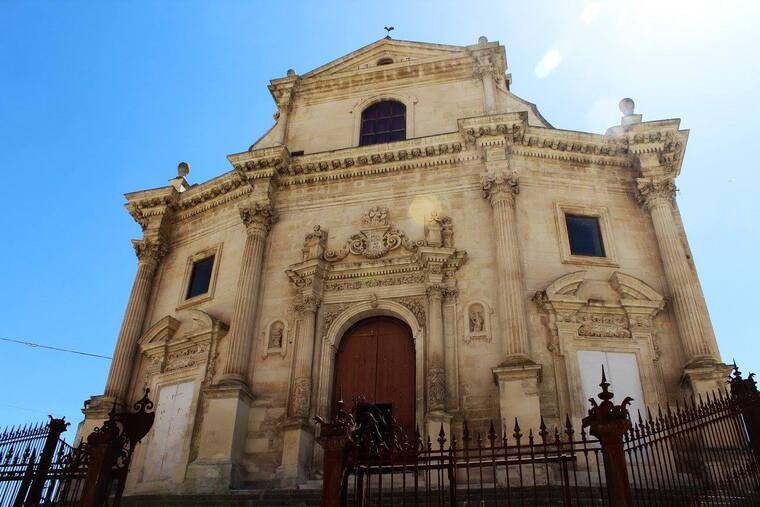 Also worth visiting is the Church of the Santissime Anime del Purgatorio. This church is one of the few that survived the earthquake of 1693. The façade is in Baroque style, but the real beauty of this place of worship is the marble interiors and the large painting “Souls of Purgatory” dating back to 1800 by Francesco Manno. 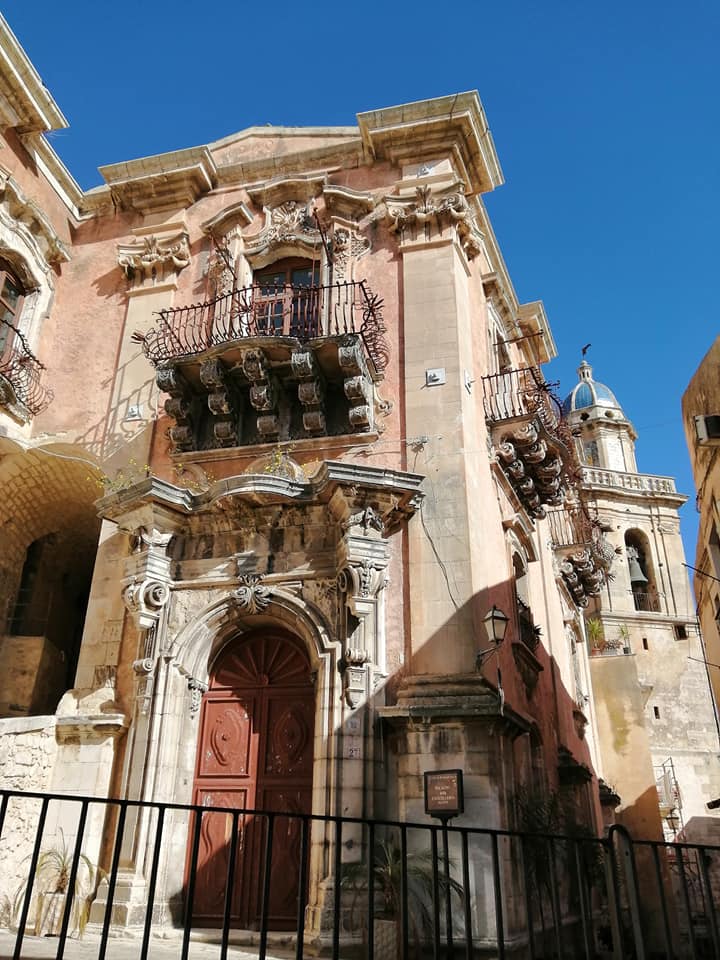 The Chancellery Palace is one of the 18 monuments of Ragusa, a UNESCO World Heritage Site. It is located in the oldest part of the city and is made in a refined Baroque style. Passing under the arch to the left of the building you can admire the bluebell tower of Santa Maria dell’Itria in the distance.

Continuing along Via Duomo, you reach the church of San Giorgio, with the entrance to the cathedral preceded by a long staircase. Crossing the Piazza del Duomo, full of restaurants and small shops, on the right is the Church of San Giuseppe.

Continuing the tour of the city do not miss a visit to the most beautiful traditional shops; here you will find painters, restorers, and ancient craftsmen. It is worth entering the Sicilian Cart workshop, where you can admire the ancient art of repairing ancient Sicilian carts. 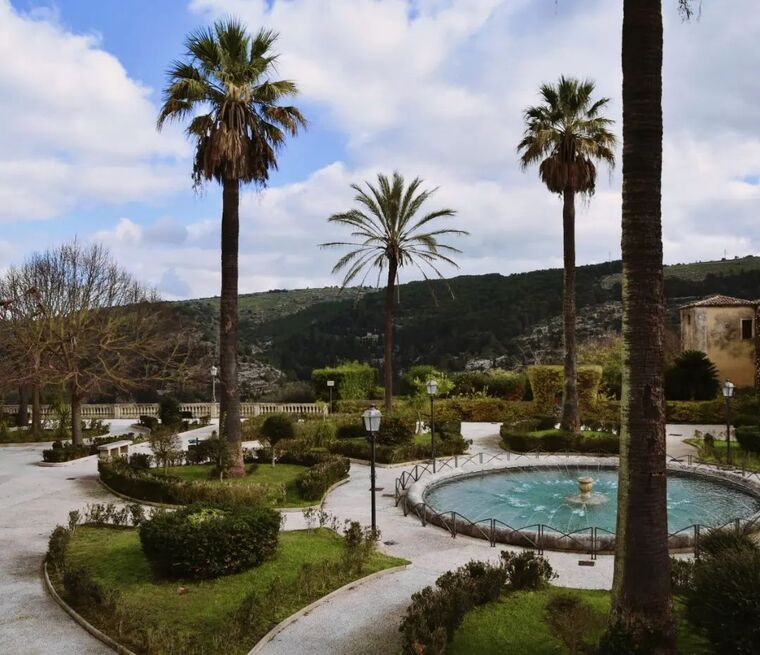 In Ragusa, we also find the Ibleo Garden (or Villa Comunale), a large green park overlooking the Irminio valley. The Capuchin friars wanted this garden. The construction dates back to 1858 and is to be attributed to three wealthy notables and to the citizens of Ragusa who offered their labor for free. The garden is the oldest one in Ragusa: it covers over 15,000 square meters and is characterized by the presence of important Mediterranean plants, but there are also some exotic specimens such as the cedars of Lebanon and the pepper tree. The visitor who enters the main entrance is greeted by the avenue of palm trees, so-called because it is flanked by fifty palm trees. The perimeter of the garden is bordered by an elegant balcony overlooking a beautiful landscape. Some fountains also enrich the garden, among which one has the shape of Sicily.