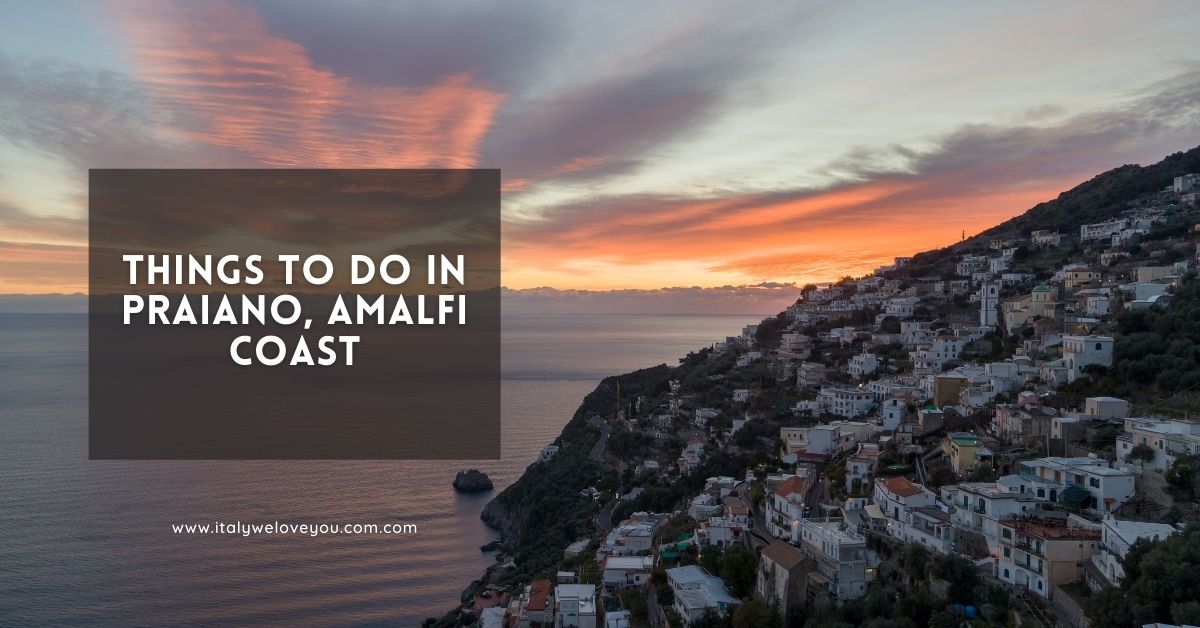 Praiano is a small town in the province of Salerno, in Campania, located between Positano and Conca dei Marini. As part of the Amalfi Coast, its territory has been a UNESCO World Heritage Site since 1997.

Praiano is the town of the most romantic sunsets on the Amalfi Coast, with a dense network of houses, stairs, alleys, and even stairs that climb from the sea, among vineyards and lemon groves. One of the most beautiful and scenic places on the coast, which has managed to keep its character intact, without being overwhelmed by mass tourism.

Best Things to do in Praiano

The Church of San Gennaro 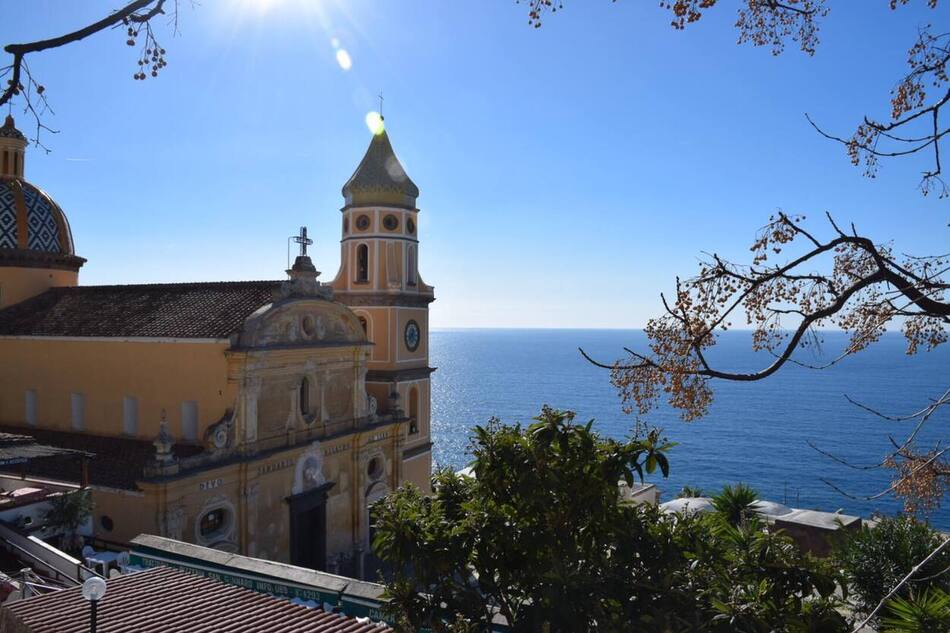 The church of San Gennaro is the symbol of the town, with its dome covered with colorful majolica tiles sparkling in the sun. The building is located precisely in Vettica Maggiore, the lower part of Praiano, the one near the sea. The church houses the beautiful Altare del Carmine, the nineteenth-century Chapel of the Sacred Heart and a majolica terracotta floor. It is the only example of Baroque architecture existing on the coast. San Gennaro is celebrated here twice a year: on the first Sunday in May and on 19 September. 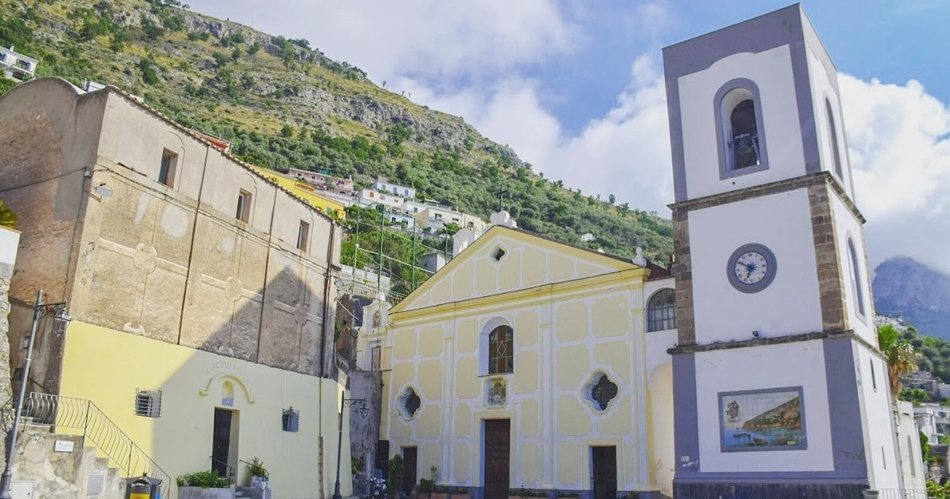 The Church of San Luca Evangelista, in the upper part of the town, dominates Praiano and, from the square in front it, you can admire a beautiful panorama. The news of its existence dates back to the 11th century. The facade of the church is simple and linear: on each of the two side doors we find a window in Baroque style. Inside there are 13 altars. San Luca is officially the protector of Praiano and is celebrated three times a year: on October 18, Monday in albis and the first Sunday in July.

The Chapel of San Nicola 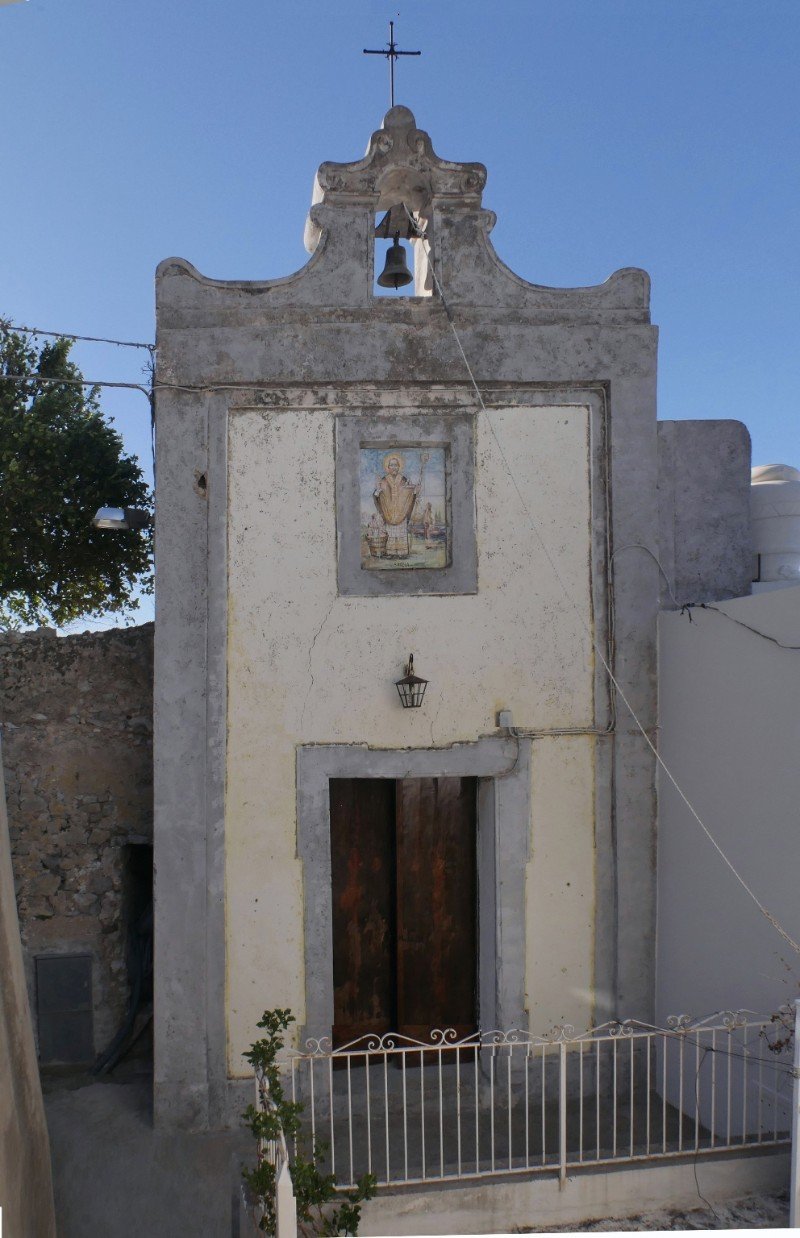 The Chapel of San Nicola is an admirable example of a votive chapel and is located in a small square along the flight of stairs that descend from the Church of San Gennaro to the Gavitella beach. The chapels and votive shrines are characteristic of Praiano, often decorated in majolica and present everywhere in the town, to testify how the families built them to ask for divine protection and reaffirm the ownership of that area. The facade of the chapel is simple, with only one entrance door. In the upper part, the façade ends with a baroque decoration and in the center an arch containing a little bell dated 1672. The interior has a single nave with two windows at the top that look towards the sea. 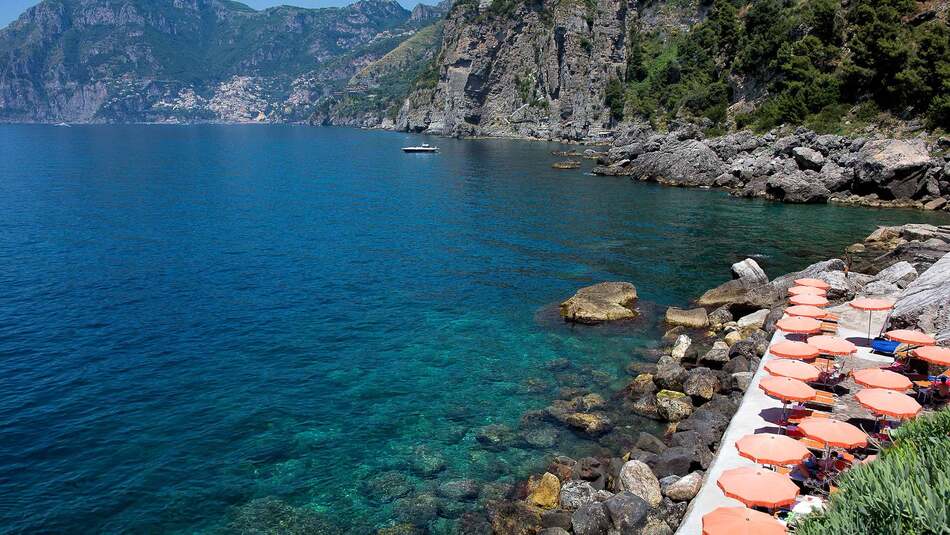 Taking one of the famous and very long stairways typical of the place, you arrive at Cala della Gavitella, the only beach on the Amalfi Coast that offers sun from morning to evening. It is a completely private beach, where beach is only 30 meters long. A stone’s throw from the beach is the Fontana dell’Altare, a picturesque natural swimming pool located in a ravine. La Gavitella is equipped with bathing establishments and bar restaurants. 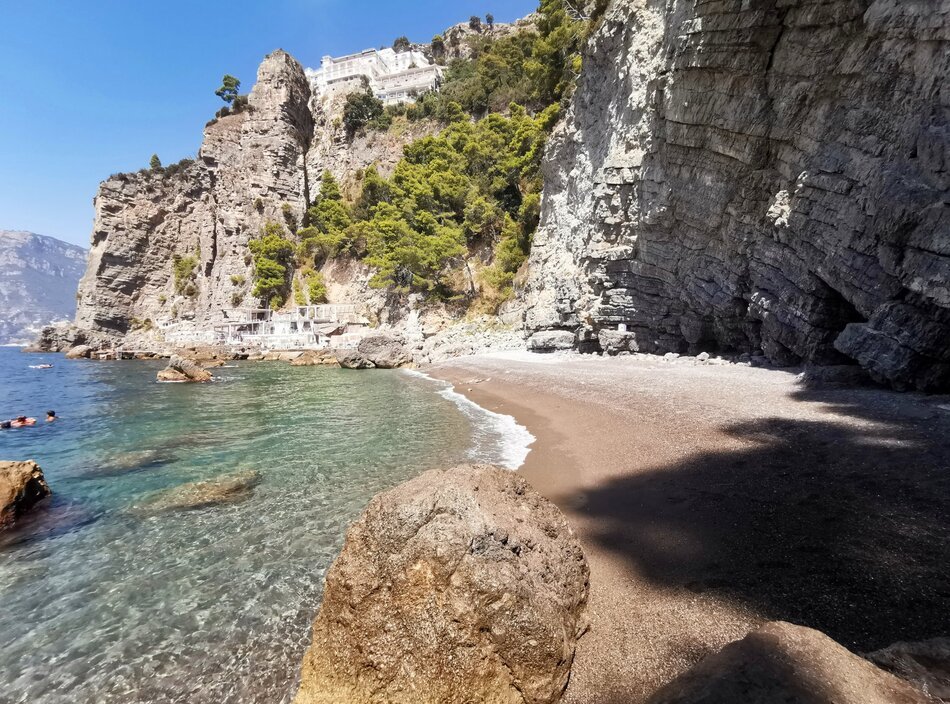 Le Praie beach, about 50 meters long, is one of the most beautiful beaches on the Amalfi Coast. Close to the beach is L’Africana, one of the most famous places in the area: it is a nightclub created from a natural cave in 1962. So you can dance just a few steps from the sea.

On the tip of the promontory stands the Torre a Mare, a tower built as a military outpost in the medieval period which can be reached by taking a walk along the path on the cliff. 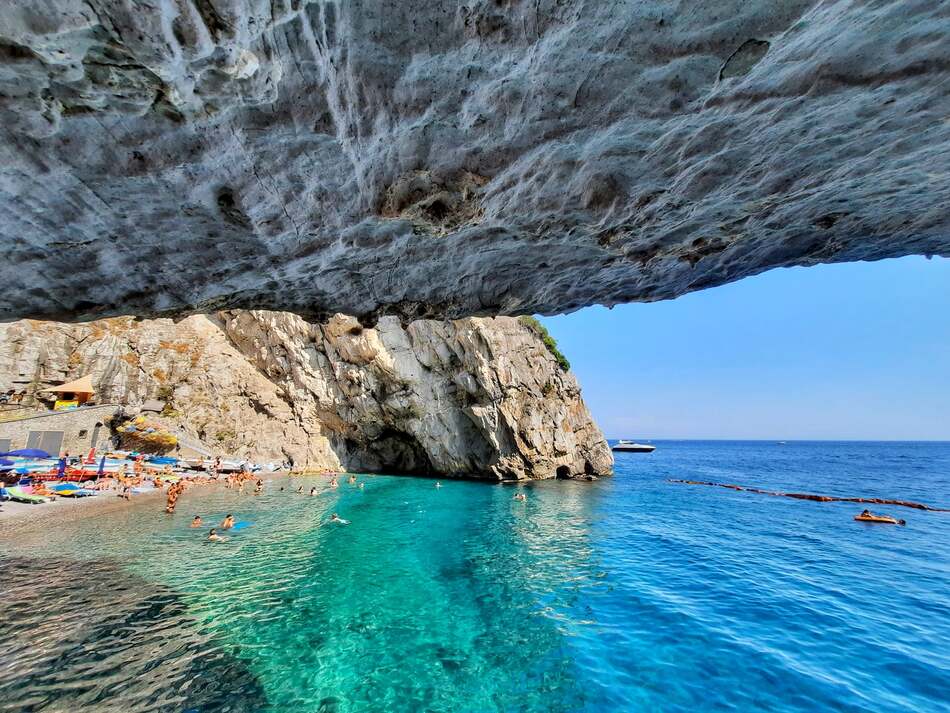 Marina di Praia, on the other hand, is the town’s beach, accessible by car and bus and therefore more crowded in summer. Beach surrounded by two high rocky walls, formerly a landing place and the only access to the valley of Praia.The beach has a bathing establishment and bars and restaurants known for their excellent fresh fish.Numerous boat excursions depart from the lido for a panoramic visit to the surroundings of the area , among the favorite destinations the splendid Grotta dell ‘Africana and Grotta Suppraiano, up to Cala di Gavitella, a west-facing beach with a view of Positano and Capri. 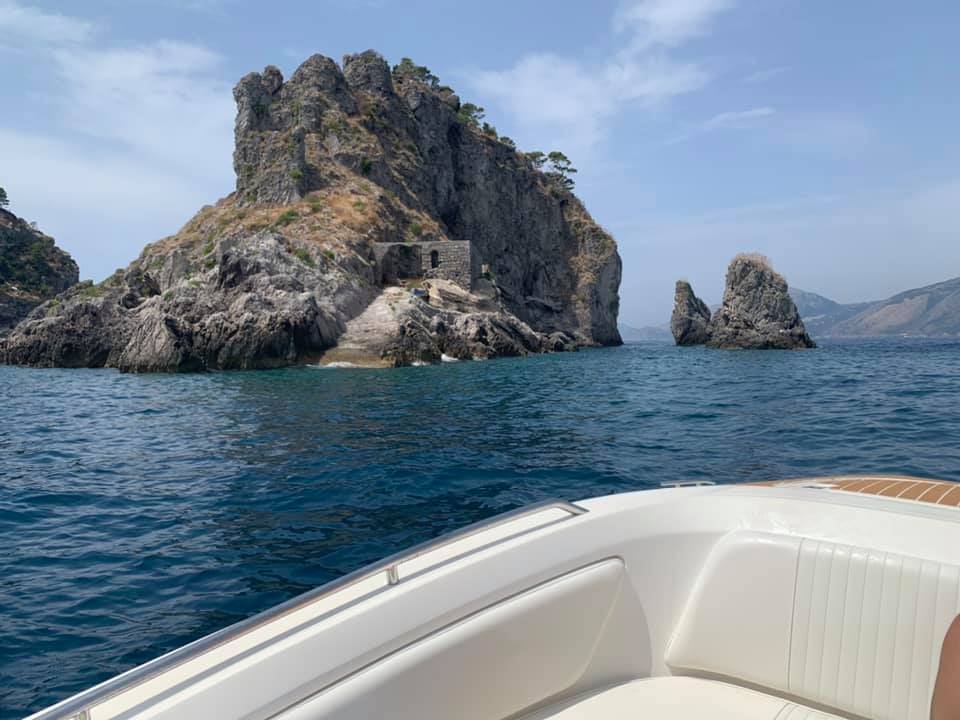 In front of Praiano stands the tiny archipelago of Li Galli, made up of three islands: Gallo Lungo, La Rotonda and La Castelluccia, which together form part of a protected marine area; it is one of the most evocative places in Campania. A place where you can get in touch with wild nature, perfect for finding the right balance and for resting. At one time, the archipelago was called Le Sireneuse, as it is said that it was inhabited by splendid sirens who, with their song, were able to charm passing sailors. It is possible to reach the islands by renting boats or rafts with and without skipper. 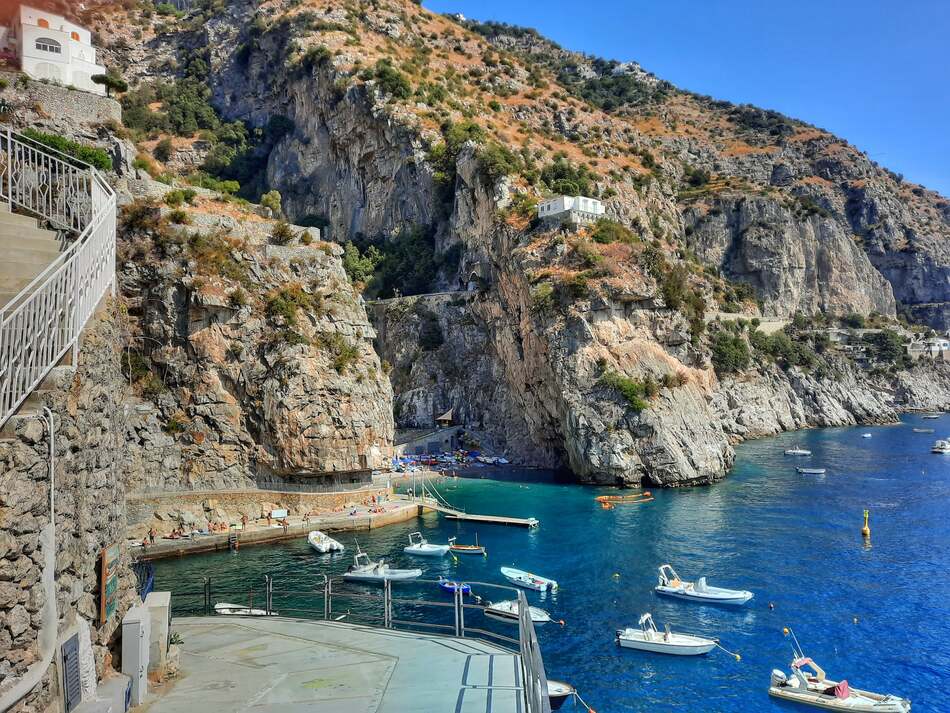 From Praiano it is possible to take part in other boat excursions to discover magical and hidden places, which can only be reached by sea. This is the case of the magnificent sea cave of Suppraiano, which can be reached by sea starting from Marina di Praia only with guided tours. Here you can admire the spectacle of nature, the stalactites and the play of lights, colors and reflections created by the water. 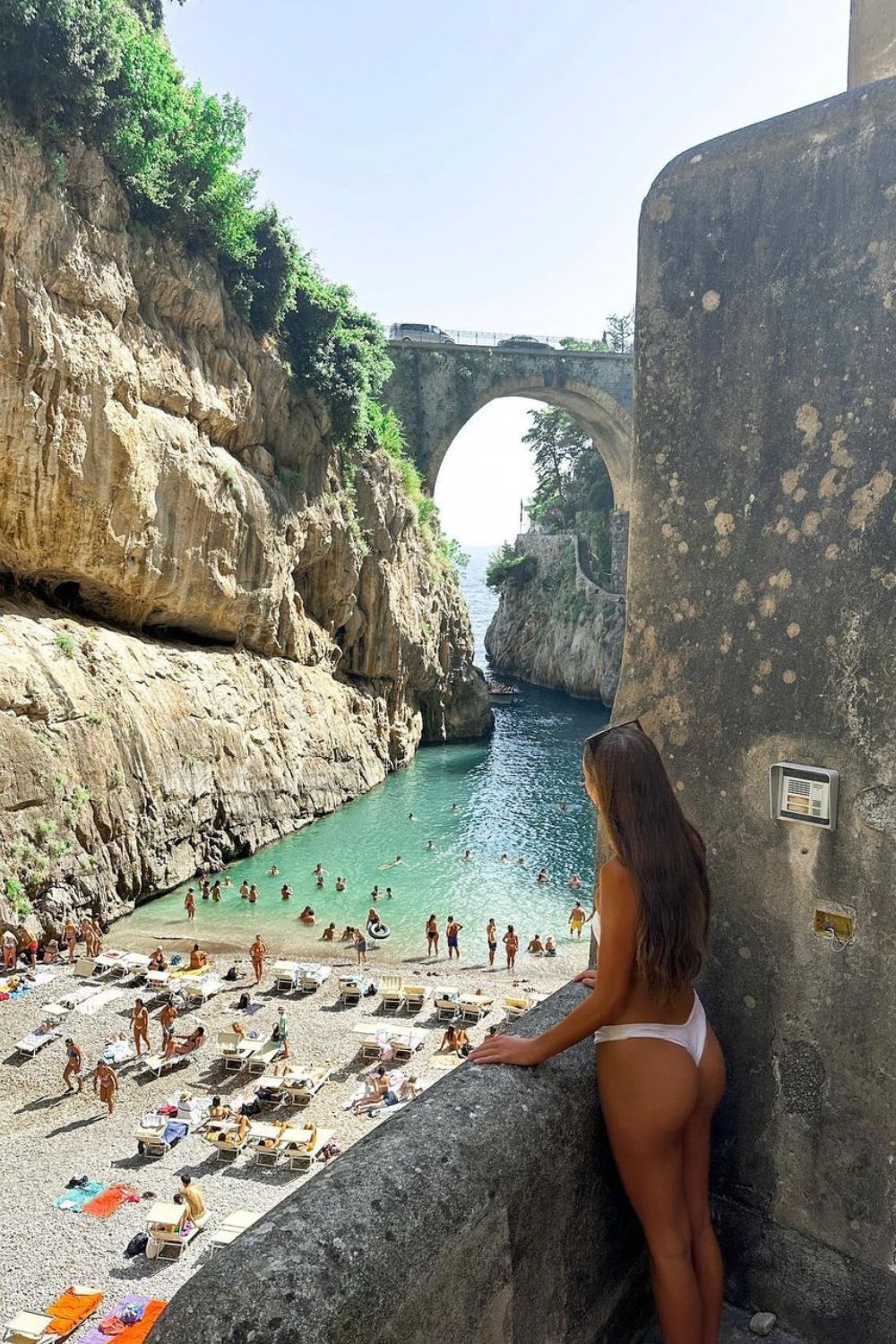 Another short excursion from Praiano allows you to admire a landscape that has few equals: the beauty of an inlet, made up of high rocky walls and crossed by the crystalline waters of the Tyrrhenian Sea: the Furore fiord, one of the most beautiful and evocative places of the Amalfi Coast. The fiord of Furore is a deep crack in the rock crossed by the Schiato stream. To reach the beach you have to take a rocky path that starts from the bridge that overlooks the inlet itself.

On the slopes of Mount S. Angelo, at an altitude of 364 m., is the Church of Santa Maria a Castro with the adjoining convent of San Domenico. From here there is a wonderful panorama that sweeps over the town of Positano to the island of Li Galli and the island of Capri. The church, dedicated to S. Maria delle Grazie, preserves a precious fresco dating back to around the 15th century. Next to the church, the convent is on two levels: on the first floor there are four cells, a kitchen and oven, a refectory and a cistern on the floor below. 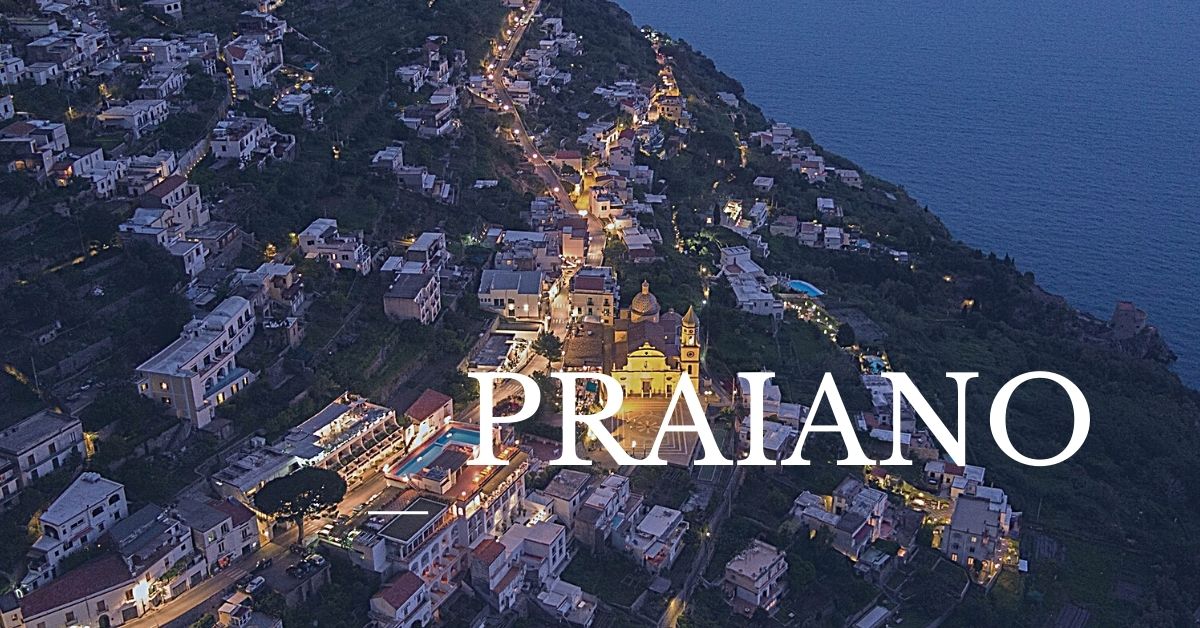 In Praiano, in the evening you can have fun at L’Africana, the famous club that every year offers nightlife enthusiasts a non-stop evening and party for all tastes. Live shows, dinner shows, theme nights, lounge and piano bar are organized every week. L’Africana is a historic venue where, over the years and in the long nights of the Amalfi Coast, the most famous faces of the jet set such as Jacqueline Kennedy and Gianni Agnelli have met. 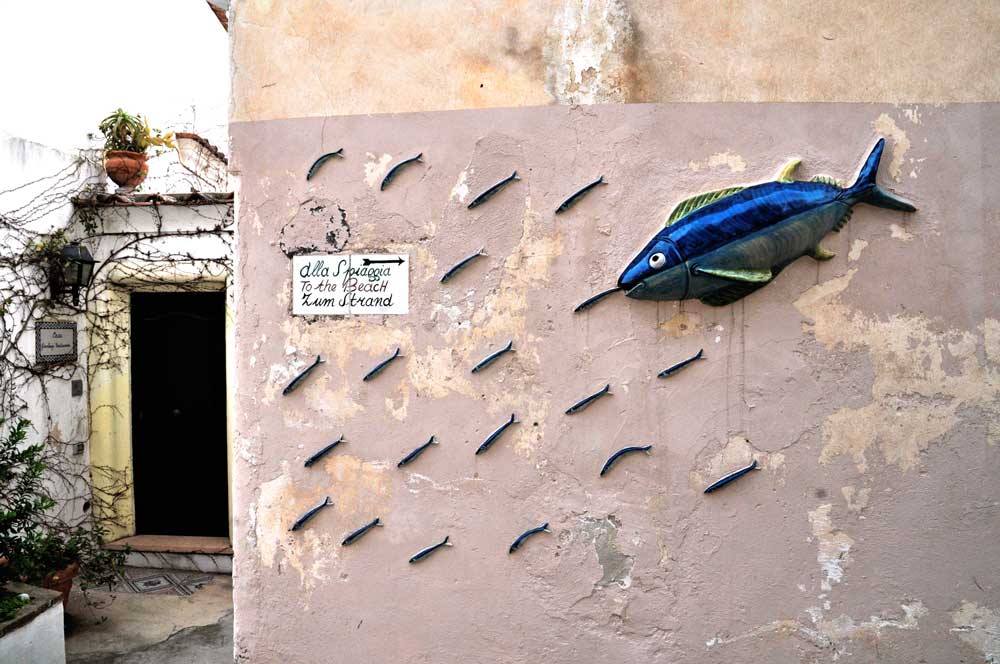 Last but not least, to combine art from the past and contemporary creativity, “Eight NaturArte itineraries” were created in Praiano in 2014, created by as many artists. They are pedestrian paths in the town, among 150 small installations in stone and ceramic and beautiful views. One of the most beautiful leads from Marina di Praia, walking among carob trees, myrtle and olive trees, to Torre Asciola, an ancient lookout point, where for thirty years the artist Paolo Sandulli has been creating his terracotta mermaids.