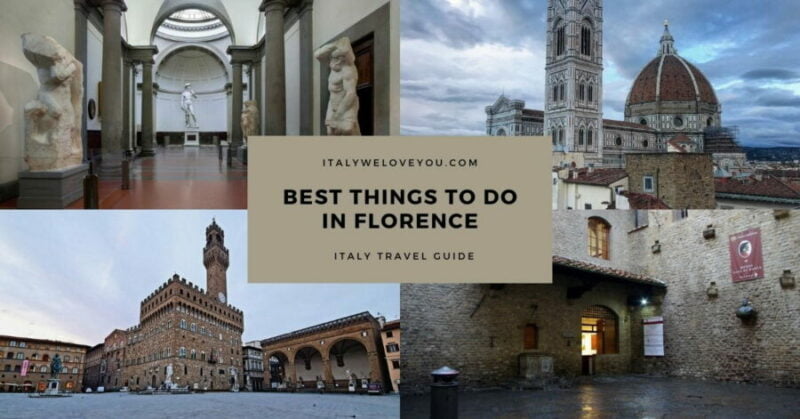 Known as “the cradle of the Renaissance,” Florence is a real open-air museum. Thanks to its many museums, churches, monuments, and historic buildings, it is the ideal city to spend a holiday full of culture and beauty.

Things to do in Florence

The visit to the city can only begin from Santa Maria del Fiore, the Duomo of Florence, the heart and symbol of the city. In addition to the majestic Brunelleschi Cathedral, we find Giotto’s Bell Tower and the Baptistery of San Giovanni, the Crypt of Santa Reparata and the Museum of the Opera del Duomo. Santa Maria del Fiore is in size the third basilica in the world, preceded by that of San Pietro in Rome and St. Paul in London. The dome was designed by Brunelleschi and built on the model of the Pantheon. The facade of the Duomo is made with Carrara marble. Giotto’s bell tower, built-in 1334 and 85 meters high stands near the Duomo, and from its top, you can admire a beautiful panorama over the roofs of the city. The Baptistery of San Giovanni (with the bronze Porta del Paradiso) is another monument of extraordinary beauty. In the square, there is also the Museum of the Opera del Duomo where are preserved works of art removed for their fragility. The entire Piazza del Duomo has been transformed into a single museum complex that can be visited with a single ticket.

Palazzo Vecchio is the heart of the civil power of Florence. It still houses several municipal offices, including that of the Mayor, while the remaining rooms are used as a museum. Among the exhibited works we remember the paintings of the Salone dei Cinquecento, the maps of the Sala Delle Carte Geografiche  (Medici Hall of Maps), passing through the Chapel of the Duchess Eleonora of Toledo and the Sala Delle Udienze. Even just from the outside, however, Palazzo Vecchio is worth a visit. We find ourselves in front of one of the most admirable examples of civil architecture of the fourteenth century, topped by the majestic Arnolfo Tower which can be visited together with the museum.

Ponte Vecchio is one of the most famous bridges in the world and certainly one of the symbols of historic Florence. It was the only one in the city to be spared by the German troops retreating in 1944. The bridge allows the passage over the river Arno, joining the historic center of the city with the east area, that of Palazzo Pitti and the Boboli Gardens. In addition to the characteristic goldsmith’s shops flanking the street, there is the “Vasari Corridor” (Giorgio Vasari was the architect in the service of Cosimo I): an elevated pedestrian path built-in 1565 to allow the Medici family to leave the administrative offices of Piazza Della Signoria and to return to the home of Palazzo Pitti, without being seen by the people.

Historic residence of the Grand Dukes of Tuscany, Palazzo Pitti is also the largest monumental green area in the city. Inside the building are the Palatine Gallery and the Royal Apartments; the Modern Art Gallery; the Museum Degli Argenti; the Museum of the Porcelains and the Costume Gallery. Finally, we find the Boboli Gardens which for the quantity of landscape views and architectural details should be considered a real museum; its visit which takes no less than three hours.

In the Uffizi Galleries, we will find works of art by artists of the caliber of Leonardo, Cimabue, Caravaggio, Giotto, Raffaello, Mantegna, Tiziano, Parmigianino, Rembrandt, Botticelli, etc … Together with the Vatican Museums in Rome, it is the most visited Italian museum in the world. It is here that Botticelli’s Venus, the Shield with the head of Medusa by Caravaggio, and a splendid Annunciation by Leonardo da Vinci are found, just to remember some of the thousands of works of art here present.

Like the Uffizi, the Accademia Gallery in Florence also hosts priceless masterpieces created by great artists. However, most visitors enter to admire Michelangelo’s famous David, a statue of over 5 meters of Carrara marble that has always embodied the universal ideal of grace and beauty. It must be said that there are two other copies of David in the city: one in Piazza Della Signoria, where the original was once located; another, in bronze, in Piazzale Michelangelo. David is not the only sculpture by Michelangelo in the Accademia Gallery. There are four of the six “Prigioni” made for the tomb of Pope Julius II and the “San Matteo”, an unfinished sculpture that was supposed to have been inserted under the dome of the Florence Cathedral.

The Basilica of Santa Maria Novella is another beautiful church in Florence. Just mention the Crucifix painted by Giotto, the wooden Crucifix carved by Brunelleschi and above all the Trinity of Masaccio (in the left nave) to realize the historical-artistic and cultural importance of this church built in the thirteenth century by the Dominican friars. The external facade is one of the most important works of art of the Florentine Renaissance, without forgetting the Museum and the Grand Cloister, the latter open to visitors on the occasion of extraordinary openings.

Also in the historic center of the city, we find the Basilica of Santa Croce, where the mortal remains of illustrious artists such as Michelangelo, Galilei, Foscolo, Canova are kept. This church worth a  visit also to admire the chapels frescoed by Giotto. Inside there is also the wooden crucifix by Donatello and also the crucifix by Cimabue, the symbol of the transition to modern painting and kept in the refectory. This beautiful basilica is considered the church of the Florentines for a simple reason: when it was erected, at the end of 1200, it was made with citizens’ money. To know that the Basilica of Santa Croce is an integral part of the complex Basilica, Pazzi Chapel, Cloisters, and Museum, accessible with a single entrance ticket.

Dante Alighieri’s home was certainly worth a visit: it is a three-story museum that traces the art, politics, and culture of medieval Florence, the city where the great poet was born and lived. The museum is in via Santa Margherita n. 1.

Piazzale Michelangelo is one of those places you absolutely must-see if you are in Florence, being the most famous panoramic observation point in the city. The view extends over the entire historic center of the city to the opposite hills of Fiesole and Settignano. Here we also find a bronze copy of Michelangelo’s David. You can get to the square by car (there is a parking lot on the side), or by bus no. 12 of the local public transport service. Wanting, even on foot, climbing the “Rampe del Poggi” from the square of the same name in the San Niccolò district.

Another gem not to be missed in Florence is the Pharmacy of Santa Maria Novella, the oldest pharmacy in Europe, which has been operating non-stop for over four centuries, in Via Della Scala no. 16.

Finally, do not miss a visit to the historic markets of Florence, such as the San Lorenzo Market and the New Market which is located under the Loggia del Porcellino (the city’s famous lucky charm), where you will find the best crafts and the best leather goods in the city.

Last but not least, when visiting this magical city? If possible, it is best to avoid holidays such as Easter or May 1st. The large number of tourists who invade the streets makes it almost impossible to walk. The ideal time is in the first spring weekends or last autumn weekends. Instead, avoid the summer months due to the heat that makes the city hot between July and August. 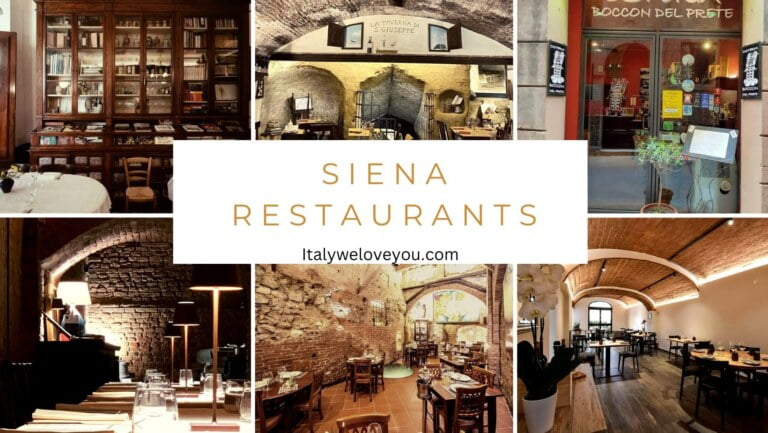 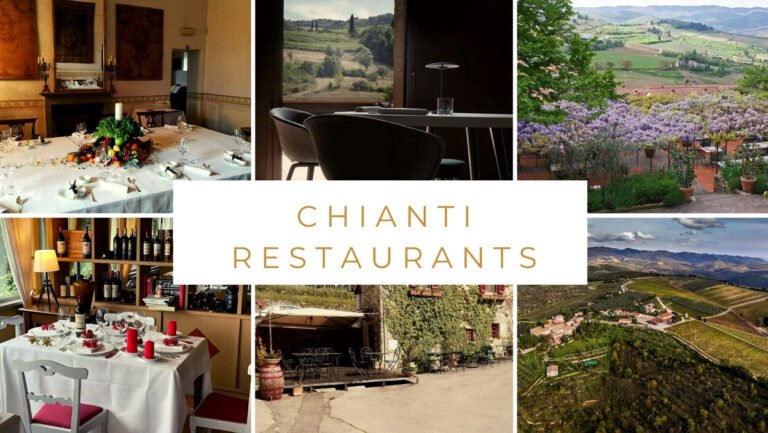 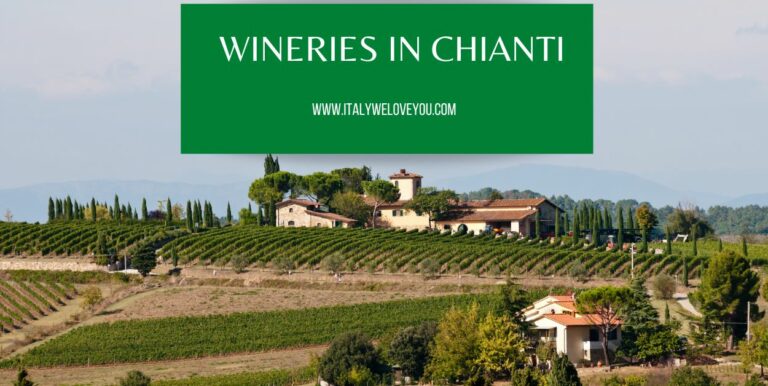