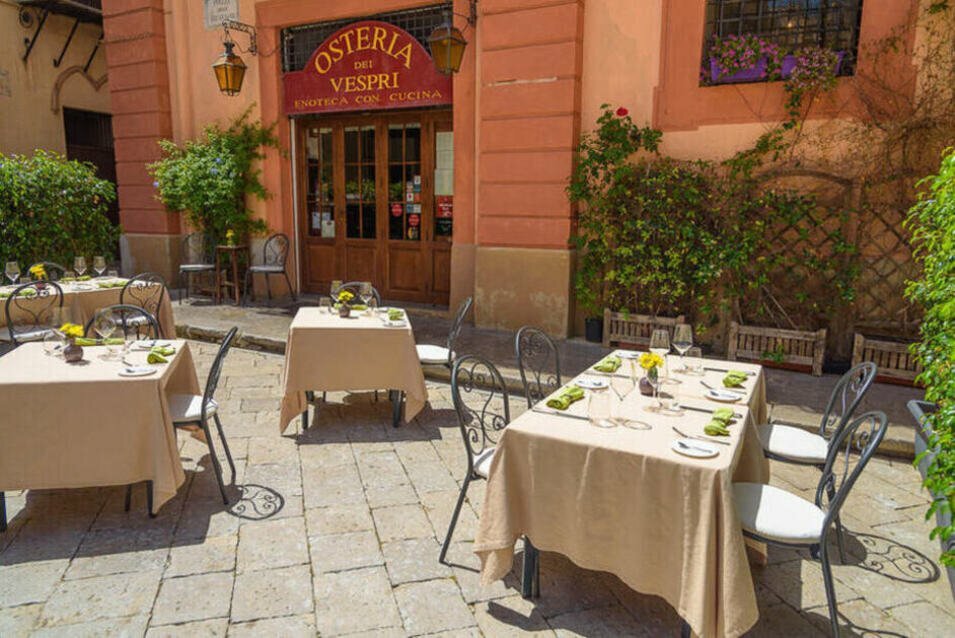 Palermo is the city of the Unesco World Heritage Cathedral since 2015, of the historic Ballarò and Vucciria markets, of the Norman Palace and the Palatine Chapel, of the beautiful Pretoria and Vigliena squares. That of Palermo, in fact, is a millenary history well sculpted in the city’s architecture. Here many peoples have succeeded one another over the centuries, giving the city an artistic heritage that is unique in the world. Churches, palaces, monuments are certainly not the only wealth the Sicilian city can count on; another essential aspect to be explored in order to get to know the city is undoubtedly the gastronomic culture. Palermo is in fact also has food and culinary traditions to be known to appreciate the best side of the city.

The “Castello a Mare” restaurant is located in the Castellammare Archaeological Park, in La Loggia district, north of the port of Palermo. The “Castello a Mare” is a large building with lawns, trees and flowers, parking, tables with a view, in a romantic place overlooking the harbor. The covered winter garden is also used in summer; two internal rooms, a fascinating wooden staircase to go up to the cocktail terrace with a 360-degree view of the city and the sea. The restaurant’s cuisine is refined, typically Sicilian, based on fish. At the “Castello a Mare” chef Natale Giunta brings the colors of Sicilian nature to his dishes, from the sea to the mountains. The recipes are clear, simple, sensitive to the senses, and tell distant stories. In the extensive menu, you can choose the classic sushi, so-called “chef’s hands-free” tasting menus, both fish and meat and vegetables, gourmet appetizers, vegetarian and vegan dishes, the great classics of cuisine, raw fish, first and second courses with meat and fish, desserts, ice creams, and slushes. Wines are mostly Sicilian, especially white, also from Northern Italy.

The “A’ Cuncuma” restaurant, located behind the Cathedral of Palermo, hands down the secrets of traditional Sicilian cuisine revisited with gourmet culinary techniques. It is a small restaurant in the city center with an informal and welcoming atmosphere, opened by the Pinto brothers. Salvatore, the sommelier, follows the guests in the choice of wines, mainly regional ones, while the chef Vincenzo takes care of the kitchen, living it as a creative laboratory, in which he mixes the flavors of the territory with his gastronomic knowledge and a pinch of innovation, giving life with unique dishes. “A’ Cuncuma” managed to offer two experiences: the gourmet restaurant, with tasting menus, and the traditional restaurant presented with high-level nuances. The tasting itineraries of “A’ Cuncuma” take you to savor the ancient and modern secrets of Sicilian cuisine. From the menu, which changes seasonally, we mention the prawn tartare with carrot juice and Modica chocolate ground with cereals; tortelli stuffed with smoked aubergine and with black pork cheek and lobster broth; mullet beccafico with orange soup; creamy pistachio with salty sablè and mulberry ice cream. “A’ Cuncuma” restaurant offers a selection of over 100 strictly Sicilian wines.

The restaurant is located near the port of La Cala (the oldest one in Palermo) in an intimate space that preserves intact the splendor of the 16th-century building in which the sculptor Antonello Gagini created his works. The creations, in fact, in this culinary case are the result of the inspiration of chef Gioacchino Gaglio. With his cuisine, he wants to express itself through the five senses. The restaurant has a comfortable environment and puts the customer at ease who is struck by the extraordinary gastronomic offer. The chef, inspired by tradition and with an eye for innovation, creates contemporary dishes, such as local aubergines, cocoa, and sweet and sour onion; linguine with redfish ragout; a fifth quarter of tuna, spinach, raisins, and pine nuts and again the amberjack in batter, fish mayonnaise, bottarga and frigitelli. The menu is restricted and changes based on the chef’s inspiration and market products. To understand the soul of the kitchen, you can opt for one of the three tasting menus: “Vucciria” with 4 courses; “Cassaro” with 5 courses; “Memories” with 7 courses.

The restaurant is located in the center of Palermo, near the lively Vucciria market: the restaurant is housed in the ancient “Quattrocchi” shop dating back to 1870. The Buatta restaurant offers traditional dishes but with a contemporary character, paying particular attention to the choice of raw materials, in full compliance with the seasonality of the products and recipes of the Sicilian and Palermo popular cuisine. Chef Fabio Cardilio is able to interpret local cuisine with the use of very fresh and high-quality raw materials. From the fish product that arrives daily from fishing boats, to fruit and vegetables. One of the musts is pasta with sardines which is prepared daily with fresh sardines. In the menu, we find, among the starters, the “sfincione”, sardines “a beccafico” and the artichoke from Menfi; among the first courses: pasta with cuttlefish ink or bucatini with sardines and fennel. Among the main courses: omelette with organic vegetables, Aeolian fish and suckling pig cooked at low temperature with fruit in syrup; octopus salad. Among the desserts, there is the typical Sicilian cannoli.

In one of the most fascinating popular districts of Palermo, the Kalsa, there is “L’Ottava Nota”, a typical Sicilian restaurant that is at the same time very modern. The restaurant has been in the Michelin guide since 2012. The chefs of the restaurant are constantly looking for new combinations to make you discover new flavors, using the traditional techniques of Sicilian cuisine and adding a touch of originality. The gastronomic proposal enhances the freshness of the raw material with dishes that well combine creative flair and Sicilian tradition. A refined, warm and welcoming atmosphere, with a modern design touched by soft lighting, is the setting for excellent products such as anchovies from the Cantabrian Sea, Jamon Iberico, French foie gras and the delicious oysters from Brittany that compose together a menu that follows the seasonality and freshness of the products, and also a list of vegetarian and gluten-free recipes. From the menu you can choose the “Silvio” egg; cuttlefish ink tagliatelle with salmon roe and oyster; the “particular” risotto (with scallops, truffles and peppers) or the squid stuffed with quinoa and caponata.

It is in Croce dei Vespri square, located in ancient Palermo in one of the most emblematic palaces of the late Baroque, Valguarnera Gangi Palace, that the brothers Andrea and Alberto Rizzo opened their restaurant in Palermo. They welcome many tourists and locals who wish to discover their cuisine, and all this in a warm and welcoming atmosphere. Among the dishes to taste, don’t miss the Sicilian “anelletti” with octopus stew, or the steak with smoked oil and tzatziki sauce. Among the starters, dark egg with mustard, asparagus and parmesan; among the first courses the lemon paccheri with burrata, black Ibleo truffle, turnip greens and tuna bottarga from San Vito Lo Capo; among the second courses the cod with red and black lentils from Leonforte, creamed with salami, beetroot and celery wafer. Among the desserts, competently paired with wines, the hot “cassatella” with Gangi ricotta cream and lemon zest. The Osteria dei Vespri also has a large cellar with a wide selection of wines that represent the diversity of the winemaking realities of the area.

The “Quattro Venti” restaurant is located in the old quarter of the same name. It is precisely this area close to the sea, marked by the predominance of port culture, which is at the origin of this unique restaurant of its kind in Palermo. The district symbolizes the historical heritage of the city. For its part, the restaurant transmits the culture of Palermo by letting you discover its most genuine flavors, revisiting the great classics of tradition. To achieve this goal, the Sicilian chef Filippo Ventimiglia revisits traditional popular dishes in a contemporary key with a touch of originality. The research and selection of raw materials favors local producers (with particular attention to fish). The restaurant counts on its musts, including the fish parmigiana on cuttlefish stew; spaghetti with cart and Salina capers; fish and centrifuged carrots; veal tagliata with tuna sauce; salted cannoli with creamed cod and pea cream. The restaurant features a skilful play of lights, refined colors of materials and furnishings, such as paintings and art objects selected by a partner gallery that exhibits its works of art every month.

Located in the center of Palermo, the “Sesto Canto” restaurant welcomes you in a warm atmosphere. During the meal, jazz music transports you to a moment of absolute relaxation. You are seated on straw chairs with black and white photographs of jazz musicians as a backdrop. But it is not the unique decoration that makes “Sesto Canto” famous, it is its exquisite cuisine. The creative hands of the chef enhance the delicacies of Sicilian cuisine. In fact, the chef uses Sicilian products, experiments with particular combinations of food, proposes traditional recipes in a modern way, with particular attention to the presentation of the dishes and the seasonality of the products. Here the cuisine is mainly based on fish, with courses such as octopus salad; roast with ginger and raspberries; bronze drawn pasta with cuttlefish ink and fresh ricotta with chilli pepper. But there are also recipes from the land, such as suckling pig ribs with cocoa beans and Modica chocolate. Also on the menu try the revisited salmon burgers; linguine with sardines and seafood. All accompanied by local wines and prosecco. And to top it all, the desserts: clearly of own artisanal production, among which the traditional Sicilian “cassata” stands out.

The “Bye Bye Blues” restaurant holds two records: it is the only Michelin star in the city of Palermo and its chef Patrizia Di Benedetto is the only female chef in Sicily to have won this important award. Chef Patrizia Di Benedetto interprets a purely Mediterranean style, with the use of seasonal and local raw materials. Patrizia proposes an innovative cuisine that enhances the flavors of the Sicilian culinary tradition that has been transmitted to her by the women of her family. The restaurant is located in Mondello, a district of Palermo, with the sea just a few steps away which contributes – with the catch of the day – to the creation of many dishes on the menu, such as the aubergine and ricotta “terrine” with seared mullet and emulsion of tomato or black “cavatelli” in sea sauce and sea urchin foam. And again: a mixture of raw fish with black salt; seafood salad with tomato ice cream and seaweed sponge; courgette and seafood soup; smoked potato gnocchi and chicken “alla cacciatora”; crispy chicken in ginger marinade and mustard sauce; lemon and almond cake with vanilla ice cream and a small crème brûlée.

This gourmet restaurant is located inside the Grand Hotel Villa Igiea. It is an elegant restaurant with only 14 seats, Liberty-style furnishings and a cellar of over 200 labels that includes the most renowned names and excellences of small Sicilian wineries. On fine days, the restaurant’s customers can choose to dine outdoors, in the suggestive setting of the lemon garden, overlooking the sea. The restaurant is the ideal place to taste excellent dishes created by the chef, Carmelo Trentacosti who celebrates his Sicily in every dish, among past, present and future in the constant and continuous search for the excellence of raw materials. The cuisine of the chef Carmelo Trentacosti is combined with the aromas and scents of the territory. The menu consists of creations such as “Una Baby Siciliana” (eggplant parmigiana), “Terra d’amare” (carnaroli rice, plankton, Girgentana goat cheese made from raw milk, sea urchins and verdello mandarin from the garden of Villa Igiea) and “Illusioni… Un ossobuco di mare” (monkfish on a cream of white beans from Acerra, grilled “papacella” sauce and black garlic).