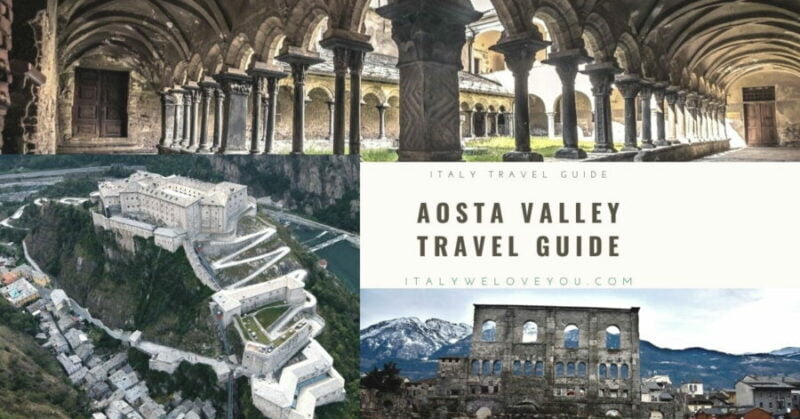 Aosta has an ancient history that you can relive by admiring the Roman and medieval remains of the historic center. The history of Aosta is linked to that of Rome starting from the name: Augusta Praetoria, founded after the victory of the Romans over the Salassi people in 25 BC The foundation of the colony was essential to keep an eye on the populations that inhabited the area and consolidate dominance over the fertile Po Valley and Northern Italy. The Romans left a rich heritage of monuments in Aosta: the Arch of Augustus, the Porta Praetoria, the Monumental Roman Theater, the Amphitheater, the Bridge and many other places partly preserved. Also added are the medieval churches and convents, the forts and castles in the surrounding area.

This archaeological and monumental wealth makes Aosta a beautiful city of art.

Of course, in the collective imagination, Aosta is associated with snow and skiing and one cannot speak of Aosta without referring to its mountains. The mountains are in fact a fundamental part of the life of Aosta: a tourist place that attracts people from all over the world, in summer and winter. Looking towards the Alps one immediately recognizes the shape of the two mountains symbols of Aosta: Becca di Nona, with its pyramid shape and, a little further away, Monte Emilius. This makes Aosta a destination for all seasons.

Things to do in Aosta Valley:

Aosta is easily visited in one day. The visit can start from the central Piazza Chanoux, a beautiful rectangular square closed to traffic. The square is dedicated to the martyr of the resistance Émile Chanoux, killed by the Nazis in 1944. Surrounded by historic buildings and surrounded by the Alps, the square is the fulcrum from which the main streets of Aosta branch off. In the center of the square stands the “Alpino”, the monument to the Aosta Valley soldier made in 1924, while on the square you can admire the neoclassical facade of the Town Hall, with rich decorations on the pediment and two fountains that symbolize the two rivers of Aosta: the Dora Baltea and the Buthier stream. The arcade of the Town Hall houses the historic National Cafe, built around 1815 on the remains of the Convent of San Francesco: it is the right place for a pleasant break. Next to the town hall is the historic Hôtel des États, which dates back to 1730 and is famous for being the seat of the local parliament, the Conseil des Commis.

The remains of the Roman city are still evident throughout Aosta. The path in Roman Augusta Praetoria can start from the Arch of Augustus which is located along the road that led to the entrance of the city through the Porta Praetoria.

The arch dedicated to the emperor Augustus was built in 25 BC to celebrate the victory against the Salassi and the foundation of the new Roman colony. The thing that is most noticeable, however, is the slate roof which is decidedly unusual compared to the classic Roman triumphal arches. In fact, the addition of the roof was decided only in the 1700s when the structure risked collapse due to water infiltration.

Continuing along via Sant’Anselmo you will find yourself in front of the large Porta Praetoria, always built-in 25 BC. It had three openings still visible today: a central one for wagons and two lateral ones for pedestrians. It was entirely covered with marble, as is partially visible in the eastern facade. On the southern side, instead, you can see one of the two rectangular defensive towers that flanked the door and which today houses the Tourist Office.

A few meters from the Porta Praetoria there is the majestic Roman Theater, with a 22 meters high facade that immediately makes the mastery of the Roman architects evident. The 45-meter proscenium and the extensive steps could accommodate up to 4000 spectators. According to experts, it also had to have a cover that allowed spectators to enjoy the shows even in bad weather days. Today it hosts cultural events. What remains of the amphitheater is incorporated into the Convent of Santa Caterina. You can still visit the funerary area of Porta Decumana, used for burials up to the early Middle Ages and the Roman bridge which is located above the ancient course of the Buthier torrent (during the Middle Ages the torrent changed its location): it is perfectly preserved and used for transit.

Together with the Arch of Augustus and Porta Praetoria, the Cryptoporticus is one of the most representative archaeological sites of the glorious Roman past of Aosta and is recognized as an Italian national monument. Made up of a marble gallery closed on three sides, the cryptoporticus had an important structural function: it served to regulate the difference in height of the area and was the junction point of two temples, dedicated respectively to Emperor Augustus and the triad of Jupiter, Juno, and Minerva. Perfectly preserved, the cryptoporticus of Aosta can be visited by purchasing a single ticket which also includes access to the Roman Theater, the Early Christian Church of San Lorenzo, and the Regional Archaeological Museum. The latter has a path that begins with prehistoric finds and then continues with Roman and early medieval ones from all over Aosta Valley. For lovers of numismatics, there is also a remarkable collection of coins ranging from the Greek age to the Savoy period.

In the past, Aosta was entirely surrounded by a wall which you can still find traces of. The points where they are still clearly visible are in via Hotel des Monnaies, via Carducci, via Carrel, via Monte Solarolo, via Abbé Chanoux. In via Festaz, especially at its intersection with via Vevey, you can see the breaches open in the walls for the passage of the modern city streets.

The Cathedral of Santa Maria Assunta is the most important and oldest religious building in Aosta: founded at the end of the fourth century, it stands in the ancient Roman area of Augusta Praetoria: here was, in fact, the sacred area of the Roman Forum.

The building dominates the city thanks to its two bell towers, which with 60 meters in height are the tallest buildings in the entire Aosta Valley. Its original structure, very impressive, was modified in the 11th century. The cathedral is rich in art and religious treasures: a precious cycle of 11th-century frescoes that decorate the vault was discovered in 1979, while the interior of the cathedral houses, among other things, a wooden crucifix from 1397, valuable artistic stained glass windows made between 1400 and 1500, and on the floor two precious mosaics dating back to the XII and XIV centuries, with the cycle of months and the four rivers of the Earthly Paradise described in Genesis. This wonder is completed by a cloister from 1460 and the Treasure Museum, which is located next to the church and houses works of art from Aosta Valley, as well as the treasure of the Cathedral: manuscripts, wooden statues, and reliquaries.

The early Christian basilica of San Lorenzo is located in the foundations of the church of San Lorenzo, which is now deconsecrated and hosts exhibitions. It is one of the oldest churches in Aosta: it dates back to the 5th century and houses the tombstone of Bishop Grato, patron of Aosta Valley. The remains of the basilica are a fascinating testimony of the past of Aosta: the Latin cross structure stands on the tombs of the first Christian martyrs, buried in the Roman cemetery area which once stood on a previous funeral settlement. The basilica houses two apses and the presbytery with a semicircle of stone, as well as a series of tombs arranged at the base of the altar and along the perimeter walls of the church. The area was already known at the time of the Romans because a consular road passed near here where an important Roman necropolis stood.

Collegiate church and the cloister of Sant’Orso

The collegiate church and the cloister of Sant’Orso instead form a precious complex that also includes the priory and the early Christian basilica. It is a set of religious buildings that dates back to the fifth century, renovated and embellished over the centuries. The collegiate church is dedicated to Saints Peter and Orso, and today it presents itself with a mainly Baroque style. Inside the church, we also find the wooden choir which dates back to the 15th century, the suggestive crypt and a cycle of 11th-century frescoes that can be admired in the attic of the church. Do not miss the bell tower 46 meters high. This religious complex in the center of Aosta is worth a visit especially for the Romanesque cloister: it was built around 1100 and houses 40 capitals illustrating scenes from the Old and New Testaments and the Gospel.

The external courtyard houses the lime tree of Sant’Orso, so named because the legend says it was planted by the Saint around 1530: since 1924, this majestic tree is a National Monument. The Collegiate church and the medieval cloister are located beyond the Roman walls, in an area of Aosta very beautiful to see, full of shops.

Before leaving Aosta, visit the megalithic area of Saint-Martin-de-Corléans, an important archaeological site unearthed in 1969, with significant evidence of almost five millennia of history, from the final moments of the Neolithic to the present day.

At about 50 km from Aosta stands the Fort of Bard, one of the symbols of Aosta Valley: a nucleus of imposing and majestic stone buildings, inaccessible from the outside. The history of this Fort has always been linked to the defense of the territory: in 1242 it was conquered by the Savoys, who in 1800 managed to resist for two weeks the advance of Napoleon and his army. Rebuilt after the destruction of Napoleon in 1830, the Fort was renovated in 2006 and today, in addition to visiting the entire structure with a panoramic route, is possible to visit also the prisons. A historical route that tells the history of the Fort. The Fort also includes the Alpine Museum, with exhibitions and multimedia workshops dedicated to children.

Aosta has quality cuisine. From meat to alpine herbs, from cheeses to desserts: its dishes are a happy marriage of the traditions of these lands. Typical products include Fontina, made with raw and whole cow’s milk, Jambon de Bosses (raw ham) and the fragrant génépy, the juniper-based liqueur. Meat-based delights open the meal: ham, dried meat, cheeses. Among the first courses, Chnéfflene, homemade pasta balls with milk and flour; they are seasoned with onion and butter or with fondue. But the soups are the real protagonists of Aosta tables. Try the Seupetta à la valpelleunèntse, based on fontina cheese, cabbage and rye bread, and the Seupa de grì, a soup of pork, barley and vegetables that is savored after a very slow cooking.

The typical bread of Aosta is black bread, produced with a mix of rye and wheat flour, it can be simple or stuffed with dried fruit.

The main courses are meat-based: Carbonade, salted beef cooked with lard and garlic and flavored with a sauce made with wine and flour, and Aosta Valley cutlet, stuffed with cooked ham, fontina cheese and fried in butter. Fondue is also a delicious single dish, which includes fontina, butter, milk, eggs. It goes well with croutons of bread or rice. Among the desserts, the “tegole“, made with almonds and covered with chocolate, and the Blanc-manger: pudding with vanilla, cream, and sugar are worth tasting. The meal ends with typical liqueurs such as Génépy and above all Valle d’Aosta coffee, enriched with lemon and grappa: it is drunk together with the friendship cup (“grolla”), which has various spouts.

Last but not least, Aosta and its territory also offer a wide range of DOC wines, including Cornalin, Prié Blanc and Muscat Rouge.