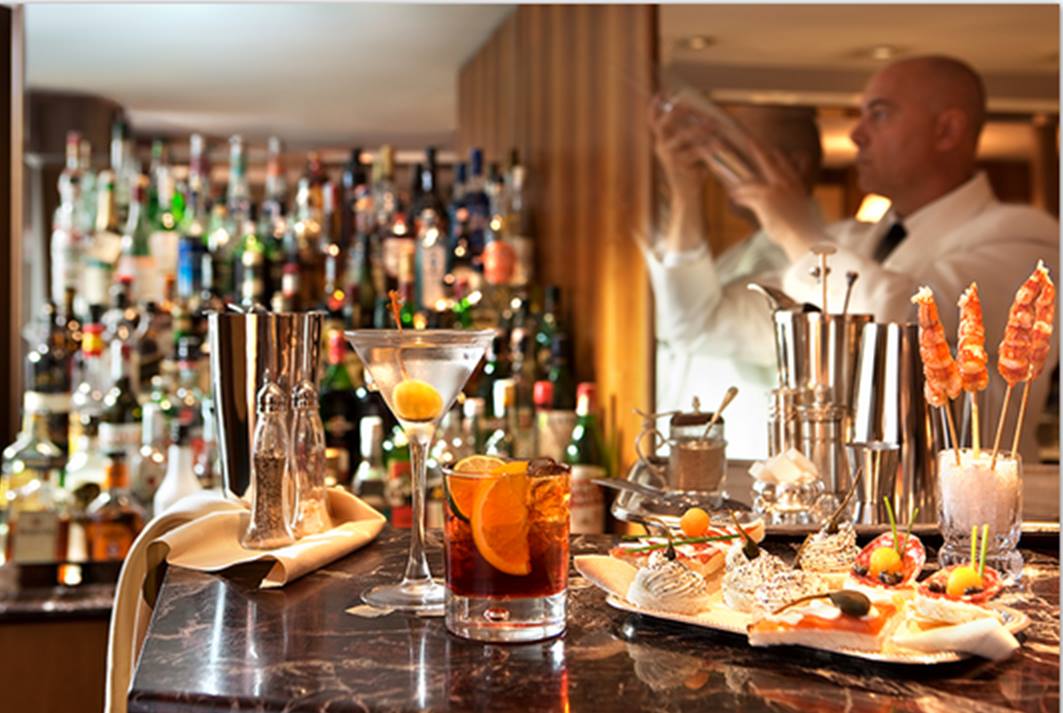 An aperitif is an alcoholic or non-alcoholic drink that is drunk before meals to stimulate the appetite. The etymology of the term leaves no doubt: it is defined as ‘aperitif’ from the Latin “aperitivus” (“that opens”), a drink capable of “opening” the stomach by stimulating the sensation of hunger. It can be a cocktail or an unmixed drink with or without appetizers.

According to Italian and EU regulations, the alcoholic aperitif is not a specific alcoholic beverage defined from a legal and commodity point of view such as wine, beer, a distillate, liqueur, bitter, and so on, but it is rather a modality of preparation and consumption of alcoholic beverages or preparations based on alcoholic beverages. It is also noted that an aperitif does not necessarily have to be alcoholic; in fact, just think of the so-called soft drinks which are the famous carbonated drinks spread all over the world. In practice, the aperitif is a drink taken in a certain context.

The History of the Aperitivo

The aperitif was born in Turin more than 200 years ago: in 1786 Antonio Benedetto Carpano began to produce, in a shop under the arcades of the central Castello Square, a flavored wine obtained with an infusion of herbs and spices. Since then Vermouth has become the aperitif symbol of the city of Turin. Today the aperitif time is widespread in the city life: from the historic cafes in the center to the periphery, you can finish the afternoon with a drink accompanied by snacks based on typical Piedmontese products such as cheeses, cured meats, breadsticks, or bagna càuda and cheese fondue.

Still, in Piedmont, the wine producers Martini and Rossi then create the Martini Bianco (a Vermouth based on Moscato and aromatic herbs left to macerate). Meanwhile, the success of the aperitif grew and, of course, also spread to other Italian cities. In Milan, which has always been an avant-garde city, a drink was studied that could somehow “compete” with the Piedmontese one. And this is how Ausano Ramazzotti, a Bolognese pharmacist who moved to Milan, created the first non-wine based aperitif liqueur. This is Amaro Ramazzotti, obtained from the maceration and infusion of the combination of 33 herbs, roots and spices.

In the rest of Italy, the aperitif has spread like wildfire. In Florence, where the famous Negroni was also invented, it began to be served with various and rich buffets. This drink it is so-called by the name of Count Negroni. All citizens entering the bars and cafes asked “what Count Negroni drinks”, hence the name Negroni. The more elaborate drinks, in addition of course to the numerous wines, transformed the aperitif into a real ritual that then spread throughout Italy, becoming very popular.

But we cannot talk about an aperitif without mentioning the very famous Campari. Gaspari Campari bought a coffee in Novara, Piedmont, where he developed the secret recipe for bitter, so-called because of its particularly bitter taste. But then he moved his local to the city of Milan, in the Vittorio Emanuele II Gallery at the corner with Duomo Square, and began to offer his liqueur before meals rather than after, as a digestive. It goes without saying that success was immediate and the story of Bitter Campari was born from there.

The aperitif can be drunk at the dining table or standing just before sitting at the table, or even in a public place other than the place where the meal will be consumed. By extension, the latter custom has itself taken the name of aperitif. In this case, the drink is usually accompanied by savory snacks or even appetizers.

The most popular aperitifs are Americano, Pirlo, Spritz, Negroni, Campari, Rossini and Sanpellegrino. Among the aperitifs composed of a single alcoholic drink, the primacy goes to Prosecco.
The fashion for the aperitif has been well established throughout Italy for several years and is also spreading to other European Countries.

The aperitif has physiological effects such as the stimulation of the secretion of gastric juices which can increase the feeling of hunger. If in small quantities it can bring slight benefits to digestion.

People take an aperitif in the late afternoon, usually between 6 pm and 8 pm, and it becomes almost a ritual on Friday, once you leave work, or on the weekend. A moment of relaxation and leisure, to spend with friends.

In the mid-90s, in Milan, the entrepreneur Vinicio Valdo had the intuition to launch the new formula that involves the combination of alcohol and buffets, thus keeping customers in the restaurant by offering them free food so that they could continue drinking. Thus was born the “Milanese” aperitif, and from here we probably then arrived at what is, today, the famous ‘apericena’, in which the aperitif is transformed into a real substitute for dinner or lunch. From 18:00 until the late evening, you can order an alcoholic drink of your choice at a fixed rate, to receive access to a buffet consisting of pastas, pizzas, cold cuts, rice, salads, assorted sandwiches and much more.

In short, the aperitif has evolved over the centuries, even changing what its original function would be, namely to “open” the stomach and prepare for the next meal.

There is no precise search for taste – although more and more businesses offer sophisticated dishes, ethnic dishes, veg recipes, sushi and sashimi – and the ritual itself includes any type of drink, from juices to carbonated drinks, from wine to spirits.

Different is the aperitif in the traditional sense, a real preparatory to dinner. It is usually consumed before sitting down at the table, inside the bar or restaurant of your choice. The custom involves a mild alcoholic which is associated with simple savory snacks, cold cuts, appetizers or the tasting of small portions of typical cheeses: the function is to prepare the taste buds to savor the next dinner.

At the same time, however, the concept of an aperitif is expanding, in the sense that the proposal, from traditional pre-dinner cocktails, has now also expanded to drinks initially not designed for this moment, such as long drinks, refreshing drinks, fruity drinks, drinks with low alcohol content up to Mocktails, or completely alcohol-free drinks, following the hottest trends in mixing, satisfying the tastes and trends of the public. In short, a ritual that no longer has just the classic function of preparing a meal, but which becomes a moment of meeting and an opportunity to eat before the meal.

Over time, the aperitif has taken on different connotations in Italy, adapting to the different cultures, traditions, and uses that characterize our varied territory.

The aperitif in Northern Italy has been almost completely replaced by “happy hour”, a trend practically widespread from Valle d’Aosta to Friuli Venezia Giulia. The traditional one still remains in the most luxurious places of the big cities or as a forerunner to lunches and dinners on special occasions, such as weddings and anniversaries. Drinks are associated with simple savory snacks or with cold cuts, but also with French fries, crackers or the typical Lombard “bruschetta”.

In Turin, however, there are no precise limitations: an alcoholic drink accompanied by sandwiches can often be bought at any time of the day or night. On the other hand, the case of Brescia is singular, where the drink is often associated with the tasting of cheeses from the Orobie Prealps.

In Rome alongside tradition there is also the happy hour inherited from the North, with real aperitifs and a large selection of spirits: it is, however, the Negroni that is the most popular. Consumption begins later than in the north: rarely before 7pm and extends until 11pm on weekends. The occasion for an aperitif is often social and informal, although in Rome it is also used for business lunches, professional brunches or during public holidays.

The aperitif in Southern Italy is particular and different from the rest of Italy, in fact in almost no case there is an aperitif because the frugal and careless diet is not inherent in the local culinary culture. In Naples and Campania, the culture of food here is extended throughout the day, the existence of the aperitif is almost irrelevant compared to the delicacies that can be enjoyed at any time. Alongside Prosecco and Campari, often with an aperitif, coffee is paired with both savory snacks, including the inevitable slices of pizza, and desserts such as pastries and babà.
Puglia is perhaps the region where the aperitif is most similar to that of central-northern Italy, the consumption of alcohol is accompanied by typical products, including white and red wine paired with taralli, pecorino cheese and local salami. An aperitif, in short, is very rich in flavors, almost more than the dinner itself, and often it is a way to fall in love with local food and wine. Situation is not very dissimilar in Calabria, Sicily and Sardinia, where the aperitif is often associated with city culinary events or promotional occasions.

In Sardinia the aperitif is often a way to get to know the local wine peculiarities, however, the culture of “eating calmly” remains and therefore the aperitif often not only does not happen, but is seen as a practice that hinders meals

The aperitif is, therefore, a more or less consolidated tradition throughout Italy and is an opportunity for bars and restaurants to increase revenues and customers. Taking advantage of the aperitif opportunity to differentiate yourself from competitors by offering a range of snacks and finger food that is always varied, perhaps changing every week, or targeting specific and increasing targets; celiacs, vegetarians, vegans, intolerant.

About drinks, one of the main trends underway is the rediscovery of the great classics based on Vermouth. And therefore of the Italian tradition, not only because Italy is the home of modern Vermouth, but also because Italy has always been at the forefront of this type of blending.

A trend that started a few years ago in the United States, with the recovery of historical mixing and which, thanks to the work of industry authorities, such as Jason Wilson, spirits & cocktails columnist of the Washington Post, and David Wondrich, historian of cocktail, has rekindled the spotlight on this Piedmontese oenological excellence at the base of masterpieces such as the Martini cocktail and the Manhattan. The interest then shifted towards mixing in Italian style, in particular on aperitifs, which have now become a must for bars all over the world.

A style that has among its ambassador’s cocktails such as the Americano, whose genesis dates back to the early twentieth century, the first Italian drink served with the addition of soda and ice according to what was then American fashion, from which it took its name, and the Negroni, which was born at the beginning of the twenties of the same century at the Caffè Casoni in Florence from a brilliant idea of Count Camillo Negroni and his friend the barman Fosco Scarselli.

But still, the “Milano Torino”, which can be considered the progenitor of this tradition, was born in the second half of the nineteenth century and made from the union of the two main products of the two cities, the bitter of Milan and the Vermouth of Turin, a cocktail of recently back in fashion. Just as the Vermuttino came out of oblivion, a drink that went crazy in the nineteenth century during what was called “the hour of Vermouth” and which is now being offered again.

Cocktail with low alcohol content, not complex to make, pleasant to drink because played on a magical balance between sweet and bitter. In short, a combination of elements that makes them perfect aperitifs.