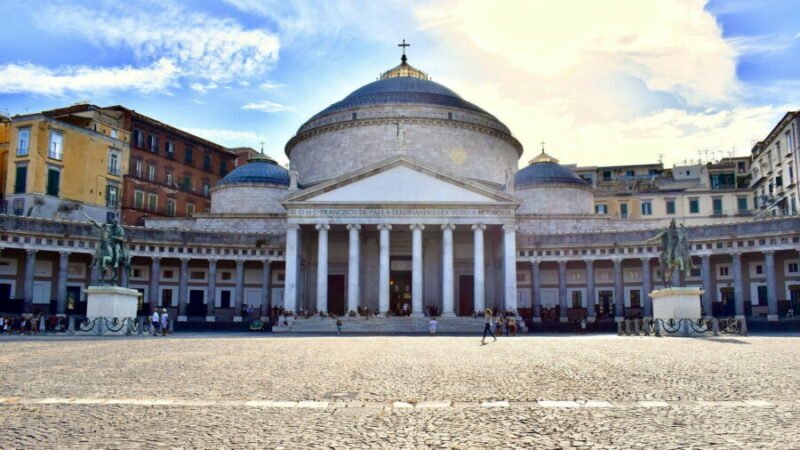 Naples is a beautiful city overlooking the sea, unique in its kind, capable of surprising any tourist with its charm and its identity unchanged over time.

Naples is a city full of beauties, stories, landscapes, attractions, wonders, and contradictions. Await you ancient squares, more than 200 churches, frescoes, museums among the most important in the world, Greco-Roman remains, wonderful panoramas, metro art stations, typical Neapolitan alleys and an authentic popular atmosphere, cheerful and lively nightlife and an ancient gastronomic tradition unmatched in the world.

In addition, its historic center (together with the pizza) is considered a UNESCO heritage site, the largest in Europe.

Best things to do in Naples :

If there is a symbolic place in Naples, this is Piazza del Plebiscito. It owes its name to the popular plebiscite with which Naples ratified the annexation to the Kingdom of Italy in 1860. Once a place of military ceremonies, today it is the stage on which important events and artistic events are held. The square is bordered by architectural monuments of exceptional beauty, among them the neoclassical colonnade of the church of San Francesco di Paola and the Royal Palace. The latter was built in the early 1600s and was also the residence of the Bourbons, Gioacchino Murat, and the Savoys. It is currently a museum where you can visit the Royal Apartment, the Royal Chapel, the gardens, and the court theater. It is also home to the National Library.

Once you are there in Piazza del Plebiscito, you can admire the nearby San Carlo Theater, one of the most famous and prestigious theaters in the world and also the oldest opera house in Europe, still active and with perfect acoustics.

Also stop by to see the majestic Galleria Umberto I. It is a commercial gallery built between 1887 and 1890, with four different entrances and inside two streets that cross orthogonally covered by a dome and bordered by four buildings.

Castel Nuovo, known by the name of Maschio Angioino, dominates the whole view of the bay. The castle is an imposing fortress with five towers, each of which has a name.

Among the things to see and of particular beauty is the Triumphal Arch, made of marble with rich decorations, reliefs, and sculptures. Inside the castle are housed the splendid Sala Dei Baroni, where the meetings of the City Council are held, and the Civic Museum of Naples.

Spaccanapoli is the road that cuts the city of Naples in two parts. This street has very ancient origins: it is in fact one of the three decumani in which the Romans organized the city. Walking through Spaccanapoli one crosses the millenary history of the city. Here there are not only the ancient buildings, the churches but also the workshops of the artisans, the fishmongers who scream, and the unmistakable smells of Neapolitan cuisine.

Along the way, you can stop and admire the Monastery of Santa Chiara, which, together with the church attached to it, is the largest Gothic basilica in the city. Do not miss a visit to the cloister of the Poor Clares, which, with its frescoed walls and characteristic walls decorated with majolica, is one of the most beautiful parts of the complex. Along the portico there are 66 pillars surmounted by as many arches, while on the walls, there are beautiful baroque frescoes. On the avenues, there are benches and columns also with majolica.

The veiled Christ, exhibited in the San Severo Chapel, is one of the most fascinating and mysterious works of art that can be seen in Naples. The veil of marble on the body of Christ is the surprising effect of the talent by Giuseppe Sanmartino, the sculptor who created the work. The chapel is worth a visit not only for Christ but also for the other works present in this little jewel hidden in the alleys of Naples: a place full of esoteric and religious symbols.

For centuries, tuff was dug from the subsoil of Naples to build the city. Under the city, therefore, there is a dense maze of caves and tunnels that tell a story parallel to the life of Naples on the surface. The underground city was used by the Neapolitans in many ways: from refuge during the bombings to a source of water, from landfill to a place where the criminals were hiding. Today it is possible to visit it: from Via Dei Tribunali you can access the classic route that crosses the Greco-Roman aqueduct, air raid shelters, the War Museum, underground gardens, and the “Arianna” Seismic Station. Always excavated underground but for different reasons is the Bourbon Gallery, commissioned in 1853 by Ferdinand II of Bourbon. The goal was an underground viaduct connecting the Royal Palace with Piazza Vittoria to allow rapid access to the Royal Palace by troops and an escape route to the sea for the Neapolitan sovereigns. Over time, the Gallery has played the role of air-raid shelter and judicial depot: along the way, therefore, there are wells, cisterns, cavities, remains of daily life during the war, huge fragments of statues and old vehicles of the years’ 50, 60 and 70.

Under the thousand-year-old surface of Naples, not only ancient treasures are hidden but also real urban works of art. They are in the subway of Naples, which preserve over 200 contemporary works of art signed by the greatest artists on the international scene. The Naples subway is not only a place of passage but has almost become a museum. This museum is popular to be widespread over the city and it worth a visit to admire every subway stop. We remember in particular the Toledo stop, which is certainly the best-known subway station in Naples. Cited among the most beautiful metro in the world, the Toledo one is able to immerse you in a daydream.

The Capodimonte Museum, commissioned in 1738 by Carlo di Borbone, houses the Farnese Collection. The museum occupies three floors: on the first floor, there is the historical apartment and the rich Farnese collection with works of art by Tiziano, Masaccio, Botticelli, Raffaello, Guido Reni, Brueghel il Vecchio, Andrea del Sarto, and many others. On the second floor there is the gallery with works from the ‘200 to the’ 700, including the extraordinary “Flagellation of Christ” by Caravaggio. The third floor displays the collection of nineteenth-century works and contemporary art with masterpieces by internationally renowned artists. All along the route there are the collections of everyday objects that the Bourbons used in the Royal Palace. The museum also has a huge park with a magnificent view over the city.

The Cathedral of Naples stands tall in the heart of the city. Its facade, about 50 meters high, has three portals and has undergone many radical changes over the years. For Neapolitans, the Cathedral is first of all the place where there is the Chapel and the Treasure of San Gennaro, to reiterate that the link between the Neapolitans and San Gennaro goes far beyond mere devotion to the patron saint. The chapel has frescoes by Domenichino and works of art by Ribera. The Treasure of San Gennaro has found space in a place next to the Cathedral and collects relics and precious objects of faith. The Treasury also includes statues, candelabra and various silverware, which the devotees jealously protected during the numerous pillages of the city.