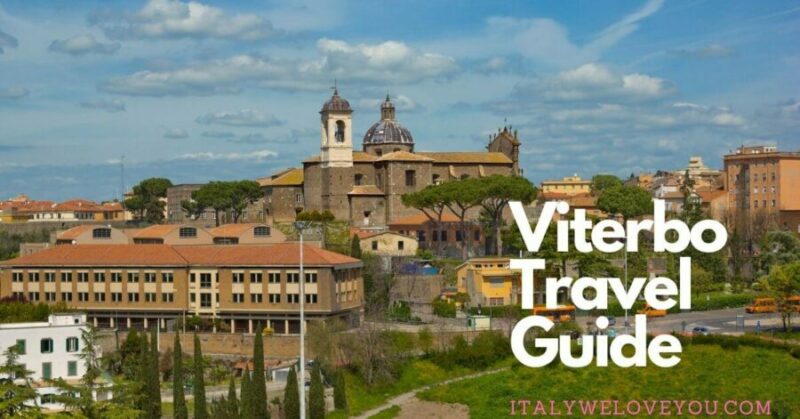 Viterbo has the largest medieval historic center in Europe: churches, cloisters, towers, stone houses, fountains, and wonderful medieval quarters are kept within the massive walls and towers that once protected the city. Founded by the Etruscans, Viterbo was a rich and powerful city. Between 1200 and 1300 it became the favorite seat of many popes who chose Viterbo to escape the Roman revolts and the risks associated with life in a city like Rome. You can retrace the stages of the long history of the city in the Colle del Duomo Museum and in the Civic Museum.

Top-Rated Attractions & Things to Do in Viterbo

Palace of the Popes in Viterbo

Two splendid buildings remain from the golden period in which Viterbo was the “City of the Popes”: the Palace of the Popes (Palazzo dei Papi) and the Cathedral of San Lorenzo. When Rome became too dangerous, the Popes preferred to escape to nearby Viterbo. The Palazzo dei Papi was built between 1255 and 1266 precisely to house the Roman popes who transformed Viterbo into a “Little Rome”. In reality, this is the enlargement of the nearby Palace of the Episcopal Curia. To the right of the stairs of this building is the loggia, with its 7 arches divided by columns and with a well in the center that feeds a fountain. This loggia is also called “of blessings” because the popes looked out from here to bless the people. The stairs lead to a large audience hall known as the Conclave Hall. This place is interesting because historically, the word “conclave” was born here. In fact, in these rooms, audiences were held between 1268 and 1271 to elect the new Pope. Exasperated by the fact that the cardinals did not make a decision, the people of Viterbo put them under lock and key (Cum Clave in Latin), they removed the roof from the hall and fed them only on bread and water. It did not help, because it still took 3 years to elect the Pope, but the word “Conclave” that is still used today remains from that period. 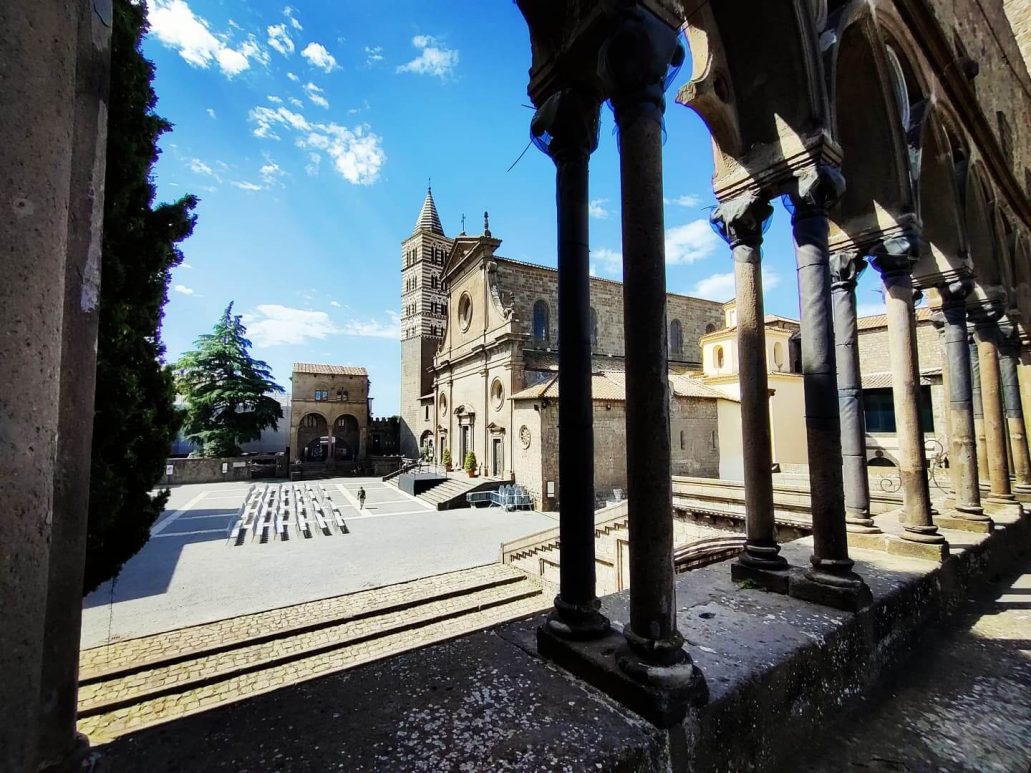 The Cathedral of Viterbo is located next to the Palazzo dei Papi. Here the 8 popes elected in Viterbo were crowned. The cathedral stands in the place where already in the seventh century there was a church dedicated to San Lorenzo, in turn, built on a pagan temple dedicated to Hercules. In 1200 the current church was built which has a Romanesque structure, but with a Renaissance facade from 1570. The bell tower in the Gothic style stands out over the square with its mighty bulk. The interior is divided into three naves with the 15th century baptismal font on the right, the chapels of Santa Caterina and Saints Valentino and Ilario. The floor and the monument to Pope John XXI, the only Portuguese pope who died in the nearby Palace after the collapse of a part of the ceiling, are beautiful. The cathedral of Viterbo has a peculiarity: behind the central apse there is still the Baroque apse with the frescoed vault and the wonderful Baroque choir. These two areas were separated after the damage of the Second World War but can be visited with a paid ticket.

The Colle del Duomo Museum is the third element of the pole that unites the Palazzo dei Papi and the Cathedral of San Lorenzo. It collects the archaeological, historical-artistic works and the treasure of the Popes. The archaeological section contains some important finds from Viterbo and Tuscia from the Etruscan, Roman, and medieval periods. Do not miss the Etruscan terracotta sarcophagus and the Goddess of the abundance of Roman origin. In the art gallery there are few but wonderful works of local and Lazio art: first of all the Madonna della Carbonara, an icon painted in Rome but of the Byzantine school; the Madonna and Child by Benvenuto di Giovanni; the Madonna with child by Bartolomeo Cavarozzi and the Crucifixion of Viterbo attributed to Michelangelo. In the Sacred Art section, on the other hand, the treasures are collected that testify to the importance of Viterbo as the seat of Christianity: you can admire sacred objects that belonged to Pope John XXI and Pius IX, as well as those used by cardinals and bishops, including the ancient vestments of San Bonifacio of the XII century.

The Civic Museum is worth a visit especially for its art gallery, with two works by Sebastiano dal Piombo, including the magnificent Pietà and the Flagellation. There are also works by Salvator Rosa and Pietro da Cortona, as well as ceramics from the Della Robbia workshop. Do not miss the grandiose Nativity scene, an altarpiece created in 1488 by the Viterbo painter Antonio del Massaro, a pupil of Pinturicchio and Perugino.

Visiting the city you will have the impression of taking a trip back in time: the medieval districts of San Pellegrino and Pianoscarano have practically remained intact. The San Pellegrino district is the most famous district of Viterbo and Via San Pellegrino is the main street of the district: the street is in fact a succession of medieval buildings. There is no shortage of Tower Houses, present in many Italian towns, homes of the wealthy aristocrats. Here there is also the homonymous square with the church, extensively remodeled and the Alessandri Palace. The district reaches its maximum splendor in the days at the turn of May 1st with the San Pellegrino in flower event. The nearby Pianoscarano district is also worth a visit. The center of the district is the square with the fountain of the “Piano”, famous because it was the cause of the revolt of the Viterbo people against Pope Urban V: one of his servants washed a dog in the fountain that the inhabitants used to drink and in front of the popular revolt, the Pope had the original fountain and many houses destroyed.

Another important monument of the city is the Palazzo dei Priori: this palace has an entrance portico that leads to a large courtyard with a fountain from the 1600s. After the staircase, on the noble floor, you can see the private chapel of the palace, with great frescoes dedicated to the Virgin and an altar with a wonderful Visitation by Bartolomeo Cavarozzi in the center. On the left side of the floor, there are 4 reception halls: the hall of the Madonna, the Regia Hall, the Council Hall, and the Landscapes Hall. The Regia Hall is the most important and sumptuous one: decorated at the end of 1500, it illustrates the mythical foundation of Viterbo and the glories of the city in the frescoes. In the coffered ceiling, 16 panels tell of the 36 castles once under the dominion of Viterbo.

The church and monastery of Santa Rosa testify how much this saint is much loved in Viterbo and its province. The church, rebuilt in 1850, has housed the body of the saint (who is the patron saint of the city) since 1258. The great devotion of the faithful to this saint is expressed every September 3 with the “Santa Rosa Machine”, a procession protected by UNESCO as an Intangible Heritage of Humanity. In the procession, a 30-meter high canopy, with the statue of Santa Rosa on top, is carried by hand around Viterbo by about a hundred men called “porters“ of Santa Rosa.

Worth a visit also the small Church of San Silvestro, built before the XI century, as well as the beautiful church of Santa Maria Nuova, on the border of the medieval district of San Pellegrino. Most likely it was originally a temple dedicated to Jupiter, as evidenced by the head of the God on the facade. In the left corner, there is the hexagonal pulpit from which St. Thomas Aquinas preached in 1266. The interior has three naves, rich in works of art including a triptych with blessing Christ venerated for centuries by the Viterbo people. A visit to the cloister is also not to be missed.

Furthermore, under the city of Viterbo, there is a network of tunnels that from the historic center reach beyond the medieval walls. Dating back to the time of the Etruscans, however, it is during the medieval period that these places assumed their current shape: raised, enlarged and elongated, the underground tunnels became an authentic labyrinth made up of secret passages that served to connect the strategic structures of Viterbo. For now, the only accessible section of the underground tunnels runs for a hundred meters on two levels under Piazza della Morte. The route is completely excavated in the tuff, a volcanic rock that characterizes the current landscape of the area. 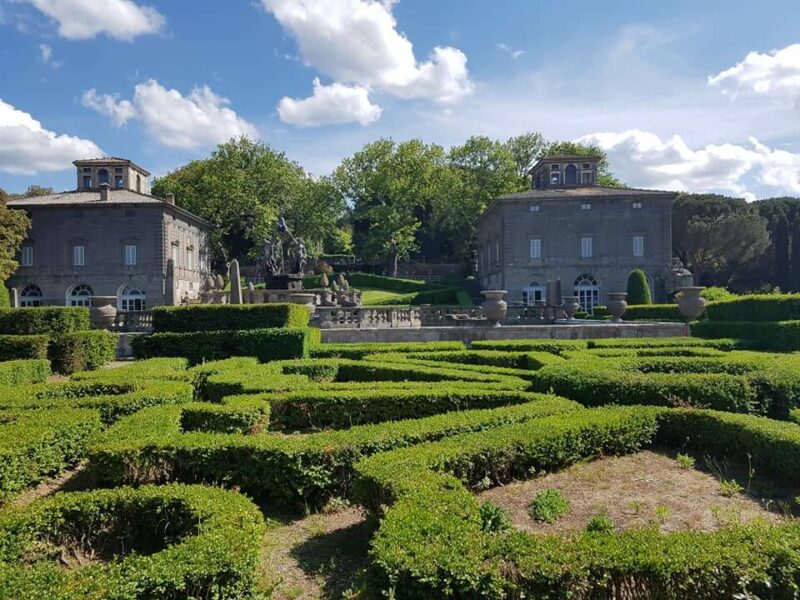 Just 5 km outside the center of Viterbo you can visit Villa Lante, one of the most beautiful villas in the world. Gardens, water features, fountains, waterfalls, statues, stairs, hunting lodges with frescoes, all in an extraordinarily harmonious setting. Construction began in 1511 on commission from Cardinal Gianfrancesco Gambara who gave the job to Jacopo Barozzi, known as “Vignola”. The most important constructions of the villa are two twin buildings, even if built with 30 years of difference. The first one, the “Gambara”, bears the symbols of the cardinal who wanted Villa Lante, while the second one, the “Montalto”, has the symbols of the cardinal of the same name. The other great architect of the villa was Tommaso Ghinucci from Siena, an architect and hydraulic engineer who, after finishing Villa d’Este in Tivoli, dedicated himself to Villa Lante for about 10 years: he was responsible for the water features of the fountains. The name of Villa Lante will be attributed in the 17th century when it became the property of Ippolito Lante Montefeltro della Rovere.

Viterbo has always been an area rich in free and paid thermal waters. The most famous free spas are those of Bullicame, 2.5 km from the center of Viterbo. Since the Middle Ages, popes and people have taken advantage of the curative characteristics of these sulfurous waters. They consist of two free swimming pools. Also 2.5 km away are the Carletti pools, while in the direction of Castiglione there are the Bagnaccio spas with free admission but paid services managed by an association. Obviously, there are also paid spa complexes, the most famous of which are the Terme dei Papi, a 4-star Spa with a swimming pool, services, and a suggestive hot-humid therapeutic cave. The other large structure is the Terme Salus, a 4-star spa with a thermal pool in the area of the Bullicame springs.

After the visit to Viterbo, all that remains is to taste its typical dishes. The cuisine of Viterbo and the province combines the flavors of three regions: in addition to Lazio, also those of nearby Tuscany and Umbria. Let’s start with the first courses: “lombrichelli“, fresh pasta made only with water and flour, with wild boar, sausage or amatriciana. The “acquacotta alla Maremma” indicates its Tuscan origin: stale bread, tomato, potatoes, wild herbs picked in the fields, it was the poor dish of the herdsmen of the Lazio and Tuscan Maremma. The “Fieno Canepinese”, fresh pasta similar to tagliatelle, topped with chicken sauce. In autumn and during the festivals do not miss the pasta with chestnut flour and related soups. From the nearby lakes of Bolsena and Vico come the fish (pike, tench, eel) for an exceptional soup (the “Sbrescia”). Among the second courses there is an abundance of meat, especially hare and wild boar, also used to season the first courses. The second most famous dish is the “Pignataccia”, a stew cooked in the oven in an earthenware pan with meat and entrails of beef and pork. We are close to Rome, so here too the entrails of animals, tripe, and less “noble” pieces find ample space on the tables. Among the desserts we remember are the “fregnacce”, the aniseed donuts, and the “Pangiallo” (mixture of dried fruit, honey, and candied citron). Among the wines stands the East East East of Montefiascone and other DOC wines such as Aleatico di Gradoli, Colli Etruschi, Tarquinia and Cerveteri.